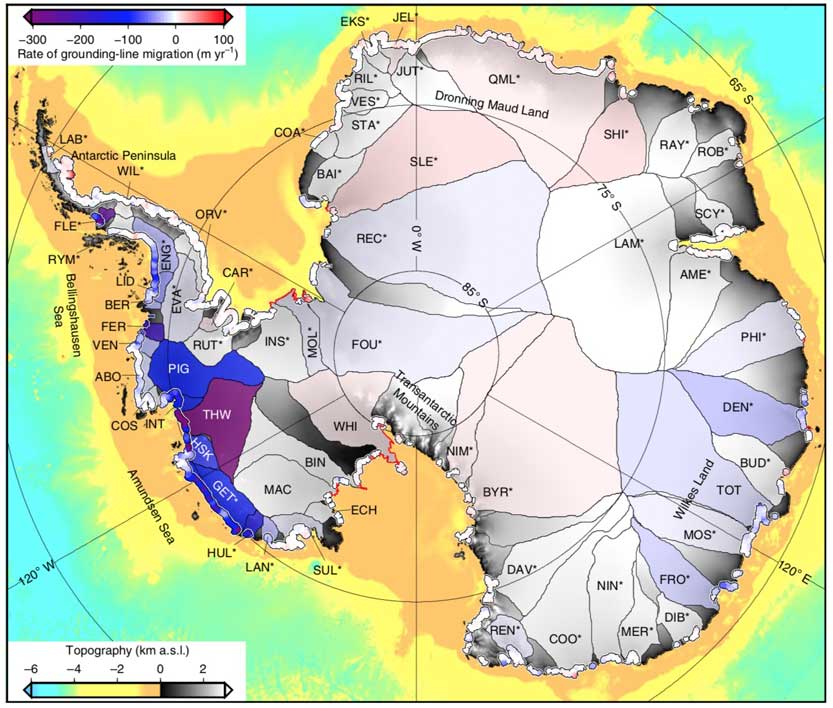 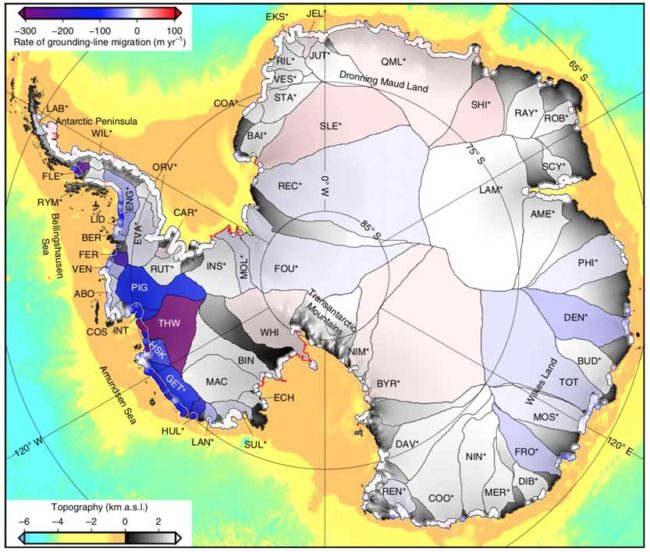 A new study has been published that reveals that warm ocean currents are rapidly eating away at Antarctic Glaciers at a rather alarming rate.

The key to understanding this comes via a satellite analysis of the grounding lines of Antarctic glaciers. That’s the point at which the glacier rests on solid land. What has been known is that the grounding lines of several Antarctica glaciers have been rapidly retreating due to warm ocean currents eating away underneath. This suggests an imbalance, but the scale of what is going on has not really been understood until now due to a lack of data.

What does the new study do?

They combined satellite data with measurements of ice geometry for all of Antarctica and so tracked how the grounding lines of Antarctica glaciers are retreating over the period 2010 to 2016.

About 10.7% of the Costal Glaciers are rapidly retreating.

We estimate that, between 2010 and 2016, 10.7% of the Antarctic grounding line retreated and 1.9% advanced faster than 25myr−1, the typical rate of ice-stream retreat during the last deglaciation.

This is a huge concern.

As the grounding lines retreat, more of the underside of the glacier is exposed to warm ocean currents.

The study itself has been published in Nature and is available here.

It is entitled “Net retreat of Antarctic glacier grounding lines” and became available on 2nd April.

Hannes Konrad, the lead author of the research …

We were able to quantify more or less all around Antarctica,

We find that 10 percent of the Antarctica ice sheet significantly retreating, but we can’t somehow extrapolate sea level rates that come from that, But to say 10 percent of Antarctica, this massive ice body, is retreating, still should be some sign of warning. It’s large.

It is a symptom for the worst case scenario – an Antarctic meltdown leading to a 10 foot sea level rise by 2100.

Via Inside Climate News we also have this insight …

Climate models suggest that the current rate of retreat could lead to “centennial-scale collapse of the inland catchment areas,” the study says. That suggests that huge areas of ice far from the ocean could collapse within 100 years, leading to unexpected pulses of sea level rise.

The land-based ice can also speed up in response to ice shelf thinning more than 500 miles away, according to a new study by British and German climate scientists who showed that the effects of localized ice shelf thinning can reach across the entire shelf. Konrad said those findings help show where Antarctica is most vulnerable to future ocean warming, including the large Ross and Filchner-Ronne ice shelves.

Bottom line: This is not about what might happen, but instead is data that is telling us what is happening.