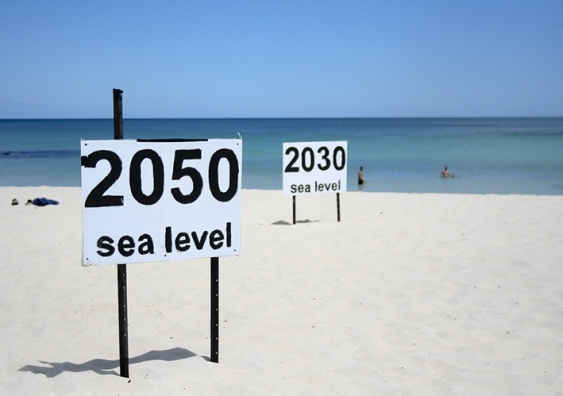 Climate models have been predicting a sea level rise for some time. What is now possible is to compare predictions contained within previous published reports with the measured and observed reality and determine if the models were correct.

An international team of researchers from Australia and China have done exactly this.

The quick summary is that the modelled rise aligns with observed reality with a 90% confidence level.

Key Observation: What scenario are we currently on track for?

So where exactly are we?

What they find is that we are currently tracking between RCP4.5 and the worst case scenario of RCP8.5,

Their results have been published and so here are the details.

We have the following …

Since these are the alpha sources here, then here they are.

(The following text is via the UNSW Sydney)

Climate model projections of sea-level rises in the early 21st century are in good agreement with sea level data recorded in the corresponding period, a recent analysis has found.

And the scientists who crunched the numbers say the finding does not bode well for sea level impacts over coming decades if greenhouse gas emissions are not reined in.

In an article published recently in Nature Communications, the scientists from Chinese and Australian institutions including UNSW Sydney examined the global and regional sea level projections of two reports by the Intergovernmental Panel on Climate Change: the Fifth Assessment Report (AR5) and Special Report on the Ocean and Cryosphere in a Changing Climate (SROCC).

They compared the reports’ projections with the observed global and coastal sea level data gathered from satellites and a network of 177 tide-gauges from the start of the projections in 2007 up to to 2018. The scientists found that the trends of the AR5 and SROCC sea level projections under three different scenarios of greenhouse gas emissions “agree well with satellite and tide-gauge observations over the common period 2007–2018, within the 90 per cent confidence level”.

Study co-author and leading sea-level expert, Professor John Church, says while he thought the projections from modelling would be accurate at the global level, he was pleasantly surprised that they were as accurate at the regional and local level.

“Our analysis implies that the models are close to observations and builds confidence in the current projections for the next several decades,” says Prof. Church, who is part of UNSW’s Climate Change Research Centre.

But he adds a caveat that because the available comparison period is short, at just 11 years, he would be hesitant to extend the same degree of confidence over the longer term – from the end of this century and beyond – where acceleration of ice-sheet contribution to sea-level rise is less understood and could lead to larger rises.

“There remains a potential for larger sea level rises, particularly beyond 2100 for high emission scenarios. Therefore, it is urgent that we still try to meet the commitments of the Paris Agreement by significantly reducing emissions,”

Study co-author Dr Xuebin Zhang, from CSIRO’s Oceans and Atmosphere Division says this is the first study to compare projections of sea level rises at both a global and regional level with observations over their overlapping periods – no mean feat given the natural variability of climate and vertical land movement from region to region.

“We carefully removed the impacts from natural climate variability, for example El Niño– Southern Oscillation, and corrected vertical land movement, which led to much improved agreement.”

The analysis looked at the three different emissions scenarios in the IPCC’s reports that corresponded to three different climate futures depending on what greenhouse gas mitigation strategies were adopted – known as Representative Concentration Pathway (RCP) scenarios.

The lowest scenario (RCP2.6) examined is for strong mitigation of greenhouse gas emissions, about in line with 2oC of global warming by 2100 but still larger than what is required to meet the Paris Agreement of well below 2oC.

The middle scenario (RCP4.5) requires stabilisation of radiative forcing in the latter half of this century and results in warming well above the Paris Target.

And the highest scenario (RCP8.5) is for large greenhouse gas emissions resulting in ongoing rapid warming and implies a commitment to large sea level rises.

“The analysis of the recent sea level data indicate the world is tracking between RCP4.5 and the worst case scenario of RCP8.5,”

“If we continue with large ongoing emissions as we are at present, we will commit the world to metres of sea level rise over coming centuries.”

Next the group will attempt to gain a greater understanding of the processes determining regional sea level rise.

The following is the abstract for the published Peer-Reviewed paper in Nature Communications.

The ability of climate models to simulate 20th century global mean sea level (GMSL) and regional sea-level change has been demonstrated. However, the Intergovernmental Panel on Climate Change (IPCC) Fifth Assessment Report (AR5) and Special Report on the Ocean and Cryosphere in a Changing Climate (SROCC) sea-level projections have not been rigorously evaluated with observed GMSL and coastal sea level from a global network of tide gauges as the short overlapping period (2007–2018) and natural variability make the detection of trends and accelerations challenging.

Here, we critically evaluate these projections with satellite and tide-gauge observations. The observed trends from GMSL and the regional weighted mean at tide-gauge stations confirm the projections under three Representative Concentration Pathway (RCP) scenarios within 90% confidence level during 2007–2018. The central values of the observed GMSL (1993–2018) and regional weighted mean (1970–2018) accelerations are larger than projections for RCP2.6 and lie between (or even above) those for RCP4.5 and RCP8.5 over 2007–2032, but are not yet statistically different from any scenario.

While the confirmation of the projection trends gives us confidence in current understanding of near future sea-level change, it leaves open questions concerning late 21stcentury non-linear accelerations from ice-sheet contributions.