There are some things we do know.

For example we know that if all the ice in the Antarctic melted then sea level will rise by about 200 feet (60 meters). So how far above sea level is your house?

Actually no, you don’t need to personally worry about waking up tomorrow and finding a super-high tide has happened overnight because we also know that this is not going to happen that quickly, but it is going in that direction due to climate change, the ice is melting and sea level really is rising at an accelerated rate. So what is happening in the Antarctic, what do we know?

There is a new paper now available on-line with a title that by itself tells you what it is all about “Rapid submarine ice melting in the grounding zones of ice shelves in West Antarctica“.

There is rather a lot of ice piled up on top of the Antarctic and it has always slowly flowed over the edges and out into the ocean. At the edges it forms shelves of ice that sit on the bedrock. It is specifically the ice loss in one specific region, the Amundsen Sea embayment (ASE) of West Antarctica, that this new paper now quantifies.

The lead author is Ala Khazendar. He is a geophysicist and polar expert at NASA’s Jet Propulsion Laboratory in Pasadena, Calif, and so measuring and understanding what is happening is his specialist focus.

Here we directly quantify bottom ice losses along tens of kilometres with airborne radar sounding of the Dotson and Crosson ice shelves, which buttress the rapidly changing Smith, Pope and Kohler glaciers. Melting in the grounding zones is found to be much higher than steady-state levels, removing 300–490 m of solid ice between 2002 and 2009 beneath the retreating Smith Glacier. The vigorous, unbalanced melting supports the hypothesis that a significant increase in ocean heat influx into ASE sub-ice-shelf cavities took place in the mid-2000s. The synchronous but diverse evolutions of these glaciers illustrate how combinations of oceanography and topography modulate rapid submarine melting to hasten mass loss and glacier retreat from West Antarctica.

Having read the paper, I’ve mined out a few key points …

We find melting rates in the grounding zones of the three glaciers to be much higher than steady-state levels, removing as much as 300–490 m between 2002 and 2009 in the case of Smith Glacier (40–70 m per year). The intense unbalanced melting supports the hypothesis that a large increase in ocean heat influx into the sub-ice-shelf cavities of the ASE occurred in the mid-2000s.

Here is an illustration of that. Basically, they flew over and measured the location of the ice (top and bottom using radar) in 2002 (the blue line), then again in 2009 (the red line), put them together and thus they can see what is different. 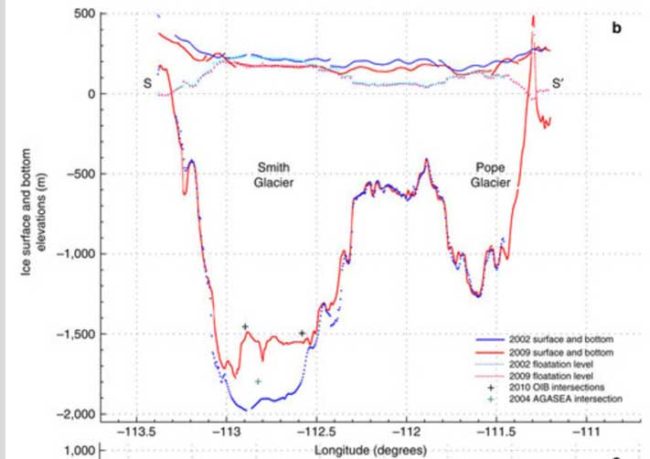 Yes the surface has dropped, but look what has happened to the bottom of the deeper smith glacier. The paper describes it as follows (the bold emphases is mine) …

The ice loss in the SG [Smith Glacier] grounding zone between 2002 and 2009 was intense. In that period, the MCoRDS radar sounding data show that the glacier lost 300 to 490 m in draft thickness in the part of the across-flow transect between longitudes −113.05° and −112.50° (Fig. 2b), representing an average rate of 40 to 70 m per year depending on location.

... The large difference between the estimated steady-state melting rates and the rates observed here demonstrates the intensity of out-of-balance melting concentrated in the grounding zone, particularly of SG.[Smith Glacier] …

Ala Khazendar, the lead author of the paper refers to these glacier shelves in the west antarctic as “the gates of Antarctica.”. This is not a poetical metaphor, but instead is an almost literal description. If these ice shelves collapse it then enables the melting of Antarctic ice to accelerate.

It rather obviously leads to some rather important questions …

When asked such questions, Ala Khazendar gives a rather blunt answer …

“The simple answer is we don’t know. And that’s the scary part,”

What is also scary is that the current melting process that is happening right now is probably irreversible.