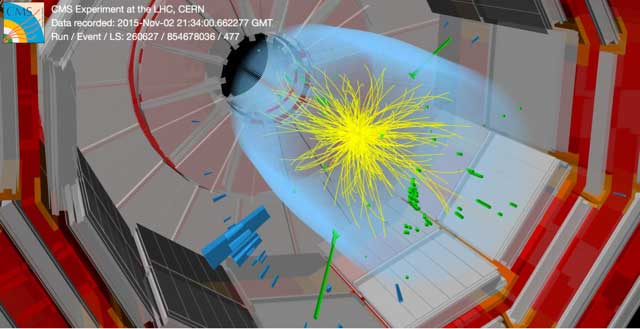 Whispers abound about the discovery of something new and quite unexpected at the Large Hadron Collider. The previous confirmation of the Higgs boson was truly amazing but they were looking for that and expected to find and confirm  it. The recent discovery (not by the LHC) of gravitational waves was also a huge scientific landmark, but once again theory had predicted it and so the discovery was confirmation of something that was already expected. This latest hint of something quite new comes from the data produced by the LHC during its last run in December prior to it being stopped for maintenance, and what emerged is (at this point) a suggestion of something that is completely unknown and quite new – this is a very very big deal, bigger than Higgs and bigger than Gravitational Waves.

Ben Allanach a physicist directly involved in the work, writes in the Guardian …

I’m reporting to you on three interesting talks we just heard: an exciting update from the experiments about the so-called “diphoton” excess seen at the high energy collisions at the Large Hadron Collider (the second run of the LHC).

If this signal, which shows too many collisions producing two particles of light at a certain energy (750 times the mass of the proton), becomes statistically significant, it means the discovery of a new particle – plus some others need to make the details of the collisions work.

This is not just “Ho hum, OK another particle”, but rather if confirmed, places the discovers into Nobel Prize territory because we are talking about new Physics that is beyond the scope of the current model.

Ben himself has written one of the many (many many) papers about it all and he is suggesting that it would confirm supersymmetry because this new particle (if confirmed) appears to be a copy of the neutrino but is heavier and has no spin, and can decay into two photons through a loop involving other supersymmetric particles.

OK basically right now nobody actually knows and they desperately need more data, so everybody is waiting for the day when the LHC can be once again turned back on.

When will they be turning the LHC back on?

We are close, very close to the LHC being back in action. The CERN Bulletin from last Monday reports …

With the machine back in their hands since Friday, 4 March, the LHC operators are now performing the powering tests on the magnets. This is a crucial step before receiving the first beams and restarting Run 2 for physics.

… At present, more than three quarters of the tests have been performed, proving the capability of the circuits to reach the values needed for operation during Run 2. The target is close, but attention has to remain high to be able to start the final checks in just a few days before accepting beams in the machine. Soon, yet another commissioning period will be over, with the beams expected back in the LHC in a couple of weeks.

Matthew R Buckley, a Research Professor at Rutgers University, writes about it all in great detail, and has a non-technical description).

He also writes about “The Search for New Physics at CERN” in the Boston Review.

and of course the CMS folks have some pictures …

These are the #diphoton event displays you were looking for! #Moriond @_Moriond_ @CERN pic.twitter.com/K5oWHmy8sd