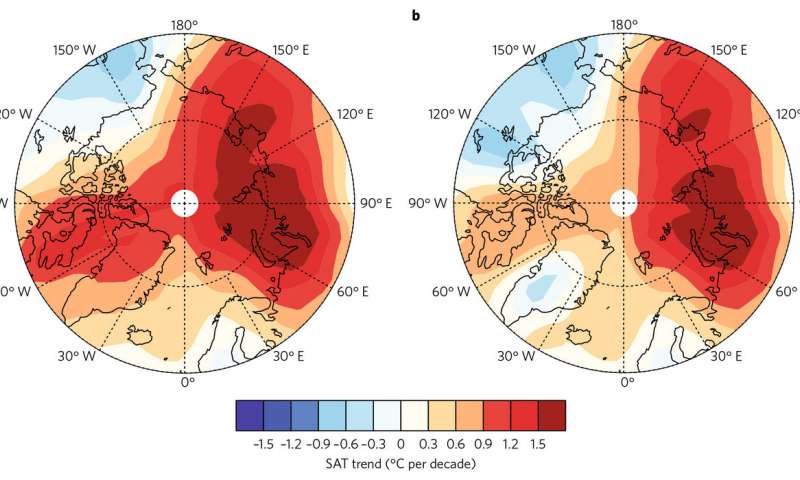 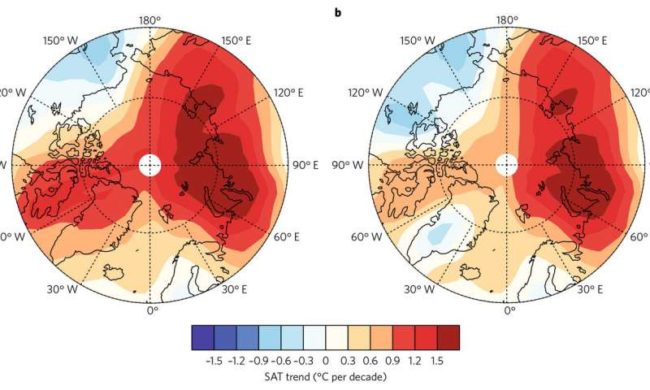 So here is roughly how things have played out …

There is now a new study that has been published in the journal Nature Climate Change that explains that the slowdown was not real at all and the the problem all along is that the data used was incomplete.

Entitled “Recently amplified arctic warming has contributed to a continual global warming trend“, it lays out the following explanation  …

the accuracy and completeness of observational data that comprise global average surface air temperature (SAT) datasets is a concern. In particular, these datasets lack either complete geographic coverage or in situ observations over the Arctic, owing to the sparse observational network in this area. As a consequence, the contribution of Arctic warming to global SAT changes may have been underestimated, leading to an uncertainty in the hiatus debate. Here, we constructed a new Arctic SAT dataset using the most recently updated global SATs and a drifting buoys based Arctic SAT dataset through employing the ‘data interpolating empirical orthogonal functions’ method. Our estimate of global SAT rate of increase is around 0.112 °C per decade, instead of 0.05 °C per decade from IPCC AR5, for 1998–2012. Analysis of this dataset shows that the amplified Arctic warming over the past decade has significantly contributed to a continual global warming trend, rather than a hiatus or slowdown.

In essence, what they have done is to construct a data set of surface temperatures from across the world that significantly improves the representation of the Arctic during the “global warming hiatus.” period. That changes the overall global average and so this slowdown turns out to have been a data illusion.

The lead author, Xiangdong Zhang of the University of Alaska in Fairbanks, explains it like this …

“We recalculated the average global temperatures from 1998-2012 and found that the rate of global warming had continued to rise at 0.112C per decade instead of slowing down to 0.05C per decade as previously thought,

…We estimated a new rate of Arctic warming at 0.659 C per decade from 1998-2014. Compared with the newly estimated global warming rate of 0.130 C per decade, the Arctic has warmed more than five time the global average,”

The conclusion here is that there was no global warming slowdown at all.

There will of course be denialism that pops up to claim “Well if they got that wrong, then had can we be sure that this is also not wrong?“.

We had data, and that data led to a conclusion that was not buried or hidden, but instead was openly debated and discussed. In essence you don’t start with a conclusion and then fudge things to verify it. Instead you make observations and then formulate a hypothesis that explains it, and you poke away at that to be sure that there are no better or alternative explanations.

A team have now used a better richer dataset along with some clever maths and discovered that the quality of the previous data was simply not good enough and that an apparent anomaly was simply a reflection that the previous dataset was not detailed enough. That’s science 101 in action improving our understanding.

The paper is available online (see here), but if you go there then all you get is the abstract because the rest is behind a paywall that wants you to subscribe for $59 or buy the article for $20.

Yes, well let’s have that discussion another day.

Instead, permit me to pull back the curtains a bit and let you take a peek to see what is on the other side of that wall. It is perhaps specifically for an audience of academic climate science subject matter experts familiar with the various items being referenced, but skimming over it yields an insight into what they actually did …

The global mean surface air temperature (SAT) has increased significantly over the past century, at a rate of 0.12°C per decade since the mid-twentieth century. However, only one-third to one-half of this trend was observed for 1998–2012 using existing datasets1 except the recently updated global SAT dataset (hereafter, K2015), leading to a debate about a global warming hiatus or slowdown. After correcting the errors mainly caused by change of observation instruments with time, K2015 suggested that the hiatus could be an artefact. In addition, although the spatial coverage of observations has been increased, the Arctic has not yet been represented appropriately in K2015, which was suggested to be largely responsible for the underestimate of the global temperature trend by other studies

So far, several interpolation approaches have been employed to improve the completeness of the spatial coverage of observations, in particular in the polar regions. Application of these interpolation methods, however, includes an implicit assumption that SAT in the polar region varies in a similar way to that at mid- and low- latitudes. In fact, polar climate change has shown characteristics distinct in many aspects due to local feedback processes, with the amplified Arctic warming as an outstanding manifestation, though obvious interactions exist between the polar region and lower latitudes, for example poleward atmosphere and ocean heat transport into the Arctic to contribute to the Arctic warming. Although satellite records improve the coverage of observations, satellites generally mea- sure the lower tropospheric temperature rather than SAT with temporal inhomogeneity and large uncertainties, especially at high latitudes with ice and snow coverage. Consequently, the deficiencies in these sources of SAT over high latitudes, hamper our understanding of Arctic climate change and its impacts on global temperature trends.

To overcome the deficiencies of the above methods and datasets, the data interpolating empirical orthogonal functions (DINEOF) method was employed here to fill data gaps for the Arctic region by combining the leading modes of EOF and their amplitude time series. The leading EOF modes typically describe dominant large- scale dynamical features in a given field, and often correspond to specific physical processes. It is well accepted that the leading EOF modes and their amplitude time series could represent the domi- nant signals in climate change. Therefore, infilling Arctic SAT with the DINEOF method could potentially preserve the major compo- nents of climate variability and change. In addition, compared with other interpolation methods, DINEOF has another advantage: it’s a self-consistent, parameter-free technique without the need of a priori information.

To reconstruct the missing Arctic data using DINEOF, we need base SAT data with full spatial and temporal coverage, at least for a sub-period of the reconstruction period. In this study, our purpose is to quantify the contribution of Arctic temperature changes to the overall global warming trend, so we only focus on improving spatial coverage and representation of annual mean SAT over the Arctic region. For this purpose, annual SAT datasets from K2015 (hereafter, Annual K2015, Supplementary Fig. 1) and the International Arctic Buoy Programme/Polar Exchange at the Sea Surface (hereafter, Annual IABP/POLES)11 were merged as the base data for the reconstruction (Supplementary Fig. 2). Buoy observations have large uncertainties, especially in harsh environments. Nevertheless, they are valuable additions over the sparsely observed Arctic19. In addition, an objective method was used here to determine the optimal number of EOF modes of the base dataset for reconstruction (Supplementary Fig. 3).

… and eventually they get to this conclusion …

Arctic warming has contributed to the continual global warming, instead of a ‘hiatus’.

The study here further indicates the importance of continuing and even enhancing current efforts to improve the spatial and temporal coverage of Arctic observations and reduce observational and data processing biases, which are not only crucial for monitoring, assessing and predicting/projecting Arctic regional but also global climate change.

Bottom Line: there was no global warming slowdown between 1998 and 2012.