OK yes, I’d a tad behind the curve, the 2015 awards were actually announced on the 17th.

You might be wondering what IgNobel is all about, and so, as suggested by the name, they are a series of awards that usually precede the actual Nobel announcements by a couple of weeks (which will be happing on 5th-12th Oct) and yet they are not related to that far more prestigious award in any way except as a parody. Their remit is to …

“honor achievements that first make people laugh, and then make them think”

… and so for the past 25 years they have been doing exactly that.

The prizes are presented by real Nobel laureates at an awards ceremony in Harvard University so there is lots of opportunity to poke a bit of gentle fun at both the concept of awards and also at the entire scientific methodology by granting recognition to the weird and whacky stuff that people research. Least you wonder, yes, real Nobel prize winners also have been granted this award as well, for example Sir Andre Geim has received both an IgNobel (for levitating frogs with magnets) and also a Nobel (in 2010 for his work on graphene).

So … on with the show 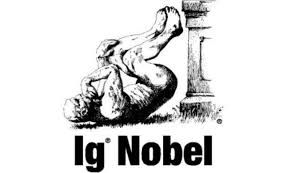 (Details can be found here)

PHYSICS PRIZE — Patricia Yang [USA and TAIWAN], David Hu [USA and TAIWAN], and Jonathan Pham, Jerome Choo [USA], for testing the biological principle that nearly all mammals empty their bladders in about 21 seconds (plus or minus 13 seconds).

LITERATURE PRIZE — Mark Dingemanse [THE NETHERLANDS, USA], Francisco Torreira [THE NETHERLANDS, BELGIUM, USA], and Nick J. Enfield [AUSTRALIA, THE NETHERLANDS], for discovering that the word “huh?” (or its equivalent) seems to exist in every human language — and for not being quite sure why.

REFERENCE: “Is ‘Huh?’ a universal word? Conversational infrastructure and the convergent evolution of linguistic items,” Mark Dingemanse, Francisco Torreira, and Nick J. Enfield, PLOS ONE, 2013. [a video accompanies the paper.]

WHO ATTENDED THE CEREMONY: The authors were unable to attend the ceremony; they sent a video acceptance speech. They will receive their prize at an at a special event in Amsterdam, The Netherlands on October 3: The European Ig Nobel Show

MANAGEMENT PRIZE — Gennaro Bernile [ITALY, SINGAPORE, USA], Vineet Bhagwat [USA, INDIA], and P. Raghavendra Rau [UK, INDIA, FRANCE, LUXEMBOURG, GERMANY, JAPAN], for discovering that many business leaders developed in childhood a fondness for risk-taking, when they experienced natural disasters (such as earthquakes, volcanic eruptions, tsunamis, and wildfires) that — for them — had no dire personal consequences.

REFERENCE: “What Doesn’t Kill You Will Only Make You More Risk-Loving: Early-Life Disasters and CEO Behavior,” Gennaro Bernile, Vineet Bhagwat, and P. Raghavendra Rau, accepted for publication in the Journal of Finance, 2015.

WHO ATTENDED THE CEREMONY: Gennaro Bernile and P. Raghavendra Rau

WHO ATTENDED THE CEREMONY: Jaroslava Durdiaková and Peter Celec will be at the ceremony. Hajime Kimata will be at the Ig Informal Lectures, on Saturday, Sept 19 (a prior commmitment prevented him from attending the Thursday ceremony); he sent a video acceptence speech which was played at the Thursday night ceremony.

MATHEMATICS PRIZE — Elisabeth Oberzaucher [AUSTRIA, GERMANY, UK] and Karl Grammer [AUSTRIA, GERMANY], for trying to use mathematical techniques to determine whether and how Moulay Ismael the Bloodthirsty, the Sharifian Emperor of Morocco, managed, during the years from 1697 through 1727, to father 888 children.

WHO ATTENDED THE CEREMONY: Elisabeth Oberzaucher

BIOLOGY PRIZE — Bruno Grossi, Omar Larach, Mauricio Canals, Rodrigo A. Vásquez [CHILE], José Iriarte-Díaz [CHILE, USA], for observing that when you attach a weighted stick to the rear end of a chicken, the chicken then walks in a manner similar to that in which dinosaurs are thought to have walked.

PHYSIOLOGY and ENTOMOLOGY PRIZE — Awarded jointly to two individuals: Justin Schmidt [USA, CANADA], for painstakingly creating the Schmidt Sting Pain Index, which rates the relative pain people feel when stung by various insects; and to Michael L. Smith [USA, UK, THE NETHERLANDS], for carefully arranging for honey bees to sting him repeatedly on 25 different locations on his body, to learn which locations are the least painful (the skull, middle toe tip, and upper arm). and which are the most painful (the nostril, upper lip, and penis shaft).

WHO ATTENDED THE CEREMONY: Justin Schmidt and Michael Smith

If you have a couple of hours to kill, here is the entire awards ceremony … enjoy.