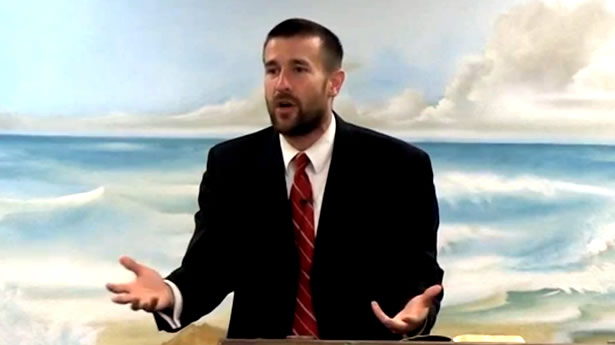 Is it “International Weird pastor” week and somebody forgot to tell me?

After Pat Robinson’s suggestion that it is demons that motivates non-believers refusal to convert, we have yet more weirdness popping up. This time it is Pastor Steven Anderson of the Faithful Word Baptist Church, and yes, this is the same chap who back in 2009 encouraged his flock to pray for the death of President Barack Obama (yes really), oh and yes, the secret service did pay him a visit after that announcement and as a result he rapidly back peddled.

So anyway, the latest news is that he is encouraging all women to be silent. The raw story reports that he said …

“This is why I don’t believe women should say ‘amen’ during the preaching either. Because ‘amen’ means ‘truly’ or ‘verily’ … it basically means ‘that’s true.’ So when I’m preaching and I say something that you agree with and that you believe in, and you say ‘amen,’ you’re saying ‘that’s true.’”

He is of course correct, the bible does indeed state in several places that women should be silent, here is the verse mentioned above …

Let your women keep silence in the churches: for it is not permitted unto them to speak; but they are commanded to be under obedience – 1 Cor 14:34

Indeed yes, how to piss off half the human population in one easy lesson.

So that’s it then, the bible says it, end of debate, that’s the final word, right?

Oh wait, is this not the same book that gives guidance on how to beat your slaves, endorses the idea of selling your daughter as a slave, is a pro-slavery text from cover to cover, and does not utter even one word against the concept? Funny how it turns out to be rather easy to discard all that, and yet at the same time pick out other bits to place specific emphases upon.

He might indeed try to justify this stance by claiming that be believes “all” of the bible, but what he is really doing is using bits of it as a shield to promote his misogynistic thinking.

You really do not wish to meet anybody who truly embraces it ‘all’ quite literally. Luckily, unlike this kook, most who do believe have got a sufficient amount of common sense and basic decency not to, so they don’t, and instead pick out just the nice bits and toss the rest.

We might indeed frown upon places like Saudi Arabia where women are kept under wraps (literally), forbidden from driving or even doing anything at all without the express permission of a male guardian, and are banned from many things that are the sacred preserve of men, and yet here we find a rather frighteningly similar mindset taking root.

Time for all of us, even those that he insists should be silent, to shout very loudly (preferably during one of has batty sermons) “NO”.