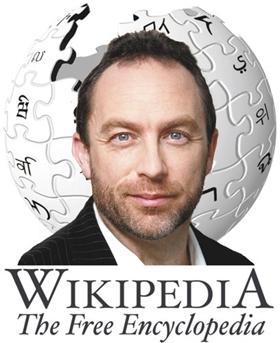 There are some whom you simply have to applaud for their decency, common sense and willingness to strive to make the world a truly better place. One such example of that is Jimmy Wales, the chap who founded and promotes Wikipedia (Oh and yes, that back there rather ironically is a link to his own Wikipedia page).

Wikipedia is well-known of course because it is now the world’s largest encyclopaedia that we all use, and so Time magazine named him in its 2006 list of “The 100 Most Influential People in the World” rightly so, because it was his vision to make it free and open, and not attempt to cash in – in other words it was never about $$ for him.

If curious to know what makes him tick and what is going on inside his head, then you might be interested in checking out “What do you believe?” over at the Big Think where he responds to that question as follows …

I do have a personal philosophy, and it’s very firmly rooted in reason. In other words, I think it’s one of the most important things that we all have as an ethical responsibility is to think really hard, to really focus our minds and try and find out what is true. And that really guides everything that I do. That’s really, really important.  And you can see that coming out in my work.  Not at all. I’m a complete non-believer. The measure of a good life? That’s a very interesting way of putting it. For me, the measure of a good life is really tied up with productivity – with actually doing something constructive, doing something useful with your time. And for me, that is not a sort of duty to toil. That’s not what I mean by that. It should be fun. It should be exciting. It should be creative. For me, that’s what makes life worth living, is having creativity and productivity, building things that are useful. Yeah, that’s how I look at it.

So anyway, the news is that a petition was recently launched on Change.Org that called for him to allow a scientific discourse on Holistic approaches to healing ..

Now least you wonder, that is of course an attempt to force nonsense like Energy Medicine, Energy Psychology into the fact based on-line Wikipedia as science.

Mr Wales has responded, and it is a truly fabulous response in which he takes a solid stance against the petition for the promotion of bullshit as fact. Here is what he wrote …

No, you have to be kidding me. Every single person who signed this petition needs to go back to check their premises and think harder about what it means to be honest, factual, truthful. Wikipedia’s policies around this kind of thing are exactly spot-on and correct. If you can get your work published in respectable scientific journals – that is to say, if you can produce evidence through replicable scientific experiments, then Wikipedia will cover it appropriately.

… and so now you have yet one more really good reason to applaud the man.