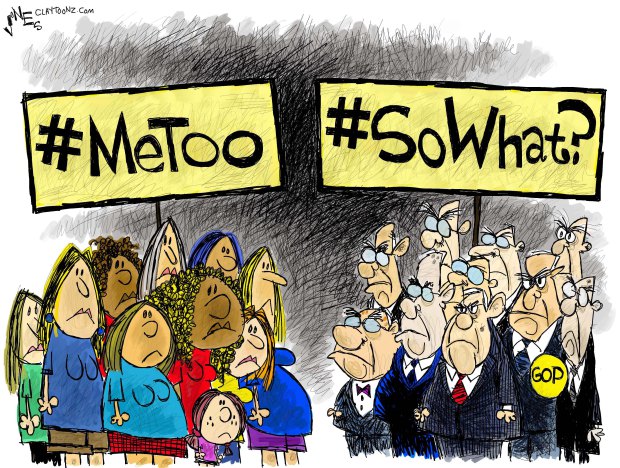 It is inevitable that within this week’s edition of weird religious news, Brett Kavanaugh is very much the focus.

An understanding of what is going on starts with this question – Why have evangelicals tossed their values under the bus?

The answer is that they want a supreme court that is populated with right-wing candidates that are willing to roll back progressive legislation. This idea is founded upon the wet dream that they have of overturning Roe vs Wade and also the desire to undo gay marriage.

Brett Kavanaugh fits the bill, and so there has been a desperate rush to appoint him.

They simply don’t care. From their viewpoint these women need to be silent.

It would appear that the handmaids tale is fast turning into a GOP documentary.

What happened this past week?

“The evil #MeToo movement unearthed a pro-abortion participant of the Dirty Women’s March— a liberal California psychology professor. This evil liar emerged from the gates of hell to accuse the judge of ‘attempted rape’ …This attack on Judge Kavanaugh is an attack on all men.”

“Rape is having sex with a woman while she screams for help. No scream, no rape according to Deuteronomy 22:23-24. [Christine Blasey] Ford says Kavanaugh held his hand over her mouth so did she scream for help when his hand was elsewhere? After all, it was in a bedroom of a house; surely, one of the other 4 teens could have heard him scream when she bit his hand. Did she bite his hand? Poke him in the eye? Women know instinctively how to protect their honor: screaming, shouting, slapping, spitting, slugging, and stabbing with a finger, pencil, or hat pin. Since she did not cry out or stab him, I will not believe her without a film of the event.”

“An ancient symbol of child sacrifice has been erected directly across from the U.S. Capitol at the precise moment when the future of the U.S. Supreme Court is hanging in the balance. Is this just a coincidence? I think not.”

No, it’s not just you, the above people really are that disconnected from reality.

Democrats are apparently being controlled

The self-appointed prophet pops up each week. This week was no exception …

Opposition to Trump is to apparently oppose a God …

Defending sexual abusers (no not Kavanaugh, somebody else) …

Supernatural claims that nobody can ever backup with facts …

So utterly absurd it is actually quite funny

Some really did not pay attention in history class …

Some really do push the boat out for daft claims …