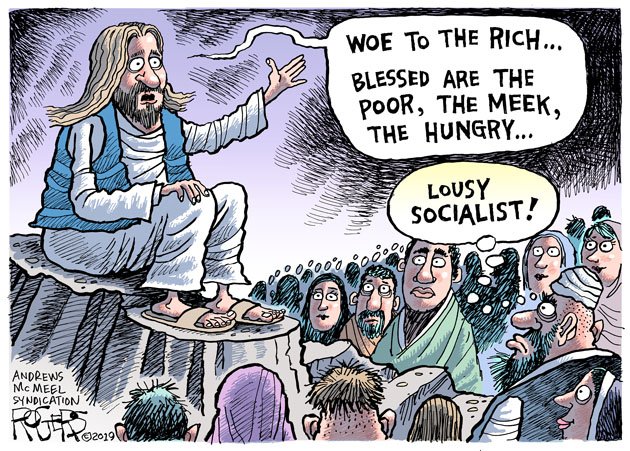 That “blessed” blend of right-wing politics and religious belief has given us a truly weird form of entertainment. Each and every week it delivers up a constant stream consisting of the utterly bizarre rantings and ravings of these lunatics.

In their eyes, those that advocate compassion for the less fortunate, affordable health care for all, and express a desire to save our planet, are deemed to be the evil and wicked spawn of Satan and crazy extremists. Meanwhile Trump is presented as the anointed one especially chosen by God, and anybody who dares to criticise him is being controlled by dark nefarious supernatural forces.

What weird items popped up during the last 7 days?

(Being attacked by these folks is actually a badge of honour, it means that she is doing good).

(Mr Taylor has a very consistent track record of making predictions and claims that are 100% wrong all the time. This is all more of the same to ensure that he maintains that perfect track record)

The Trump Cult was as vocal as it always is …

… and they also want to expand …

Somebody does not like New England Patriots quarterback Tom Brady …

When the above criticism was pointed out to him, this is what then happened …

Rick Wiles Doubles Down: Tom Brady Is Sleeping With the Equivalent of a ‘Serial Murderer’

Sonny Hernandez has a warning for anyone who supports reproductive rights: …

“You must be warned about the great storm that is coming! There are no Doppler radar systems that can detect the size of this storm or when it will come, and no shelter can harbor you from the wrath that will be dispensed on that day, since it will come like a thief in the night. The wrath of God is coming—He will come in fire—to render His anger in fury. When the Lord comes, His enemies will be punished for their iniquity, and with wrathful rebukes, all the adversaries of the Lord shall be broken into pieces. God’s wrath will be kindled hot, and with great vengeance, His enemies will be propelled into Hell where their flesh will melt, and the foul stench of their rotten corps will be swept into the fiery flames that can never be eradicated. On that day, you will beg for mercy, but God will not hear you, because you will be surrounded by a conflagration of misery called ‘everlasting conscious torment.’”

(Apparently every sperm is sacred)

‘There Are No Coincidences’: Chris McDonald Exposes the Demonic Forces Behind ‘A Star Is Born’…“Lady Gaga basically literally performed a satanic summoning of a demon at the Super Bowl [in 2017],” McDonald said. “The halftime show was nothing but a demonic ritual.”

Demon Scam of the week

(Once you con people into believing there is a problem, you can then proceed to milk them of their $$$).