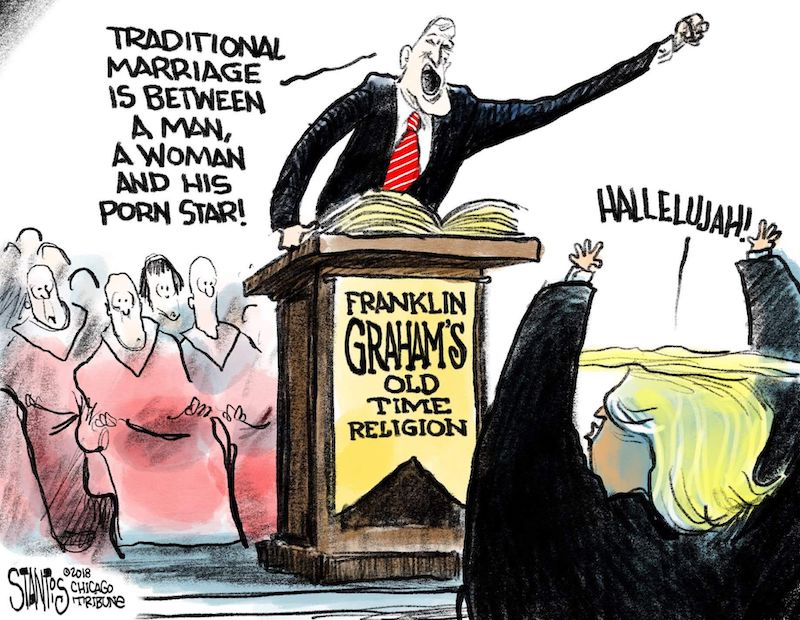 When you scan the output from the religious-right, then perhaps the word “Weird” is a bit of an understatement. You have to wonder if they seriously believe the claims that they promote, or if they are simply grifters playing a religious card.

It is most probable that we have a full spectrum that runs from outright fraudsters such as Jim Bakker, all the way through to Falwell who appears to be sincere but is sincerely wrong about almost everything.

What Happened during the 1st few days of this year?

The Cult of Trump continues to thrive …

(If the pussy grabbing or the mockery of a disabled man didn’t cause any pause amongst these folks, then why should anything else such as facts or reality)

Opposition to the Trump Messiah is still apparently evil incarnate …

(Personally I’m rather blown away by the observation that this guy thinks that he is channeling a God. You would think that being consistently wrong with past prophesies might cause some to doubt, but apparently not).

Religious Hypocrisy is as popular as ever …

… while Sex is of course popular, sexual abuse is very much a Catholic monopoly …

A few Thoughts – What will come in the year ahead?

You and I don’t need to claim supernatural powers to work this out. Past experience is very much a predictor for future behaviour, hence we can of course anticipate more of the same each and every week.

The exposure of both Abuse and Hypocrisy will continue.

Religious Grifters will continue to manipulate the gullible and glean a very lucrative tax free income.

Support for the incompetent, immoral, and grossly dishonest individual will persist amongst the hard core. I don’t even need to name him, that description immediately tells you who I’m referring to. His base will not let either facts or reality bother them one jot. This in turn will also lead to the inevitable rise of the Christian Left who gaze upon all this and find enough integrity to say “No”, and also the inevitable further increase in the Nones.

What is certain is that 2019 will be a far better year.