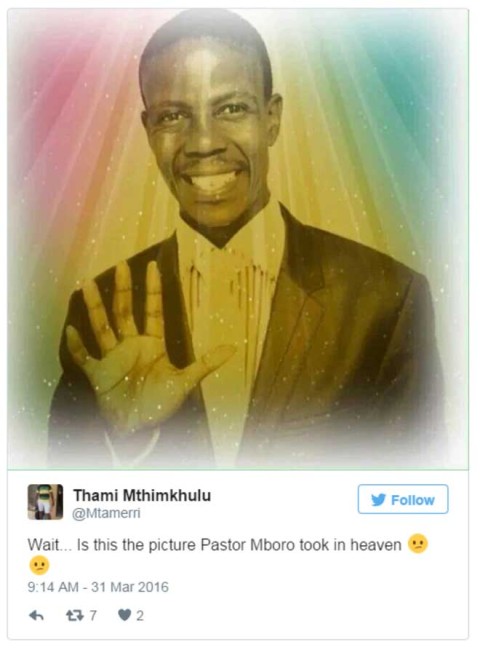 When it comes to truly weird claims then this one is way out into the ocean of weirdness and has left the distant shore of reality a rapidly fading memory. It concerns Prophet Mboro of The Incredible Happenings Ministries (the hint of what is to come is perhaps in the name that sets expectations here). So “Prophet Mboro”, whose real name is Paseka Motsoenefng, is a South African  con-man who, when he goes to preach is seen driving flashy sports cars and accompanied by heavily armed bodyguards, is now being quite rightly mocked for the utterly absurd con that he is currently trying to pull.

Prophet Mboro, the leader and founder of the Incredible Happenings Ministries in Johannesburg, says the miraculous event took place on Easter Sunday.

Thousands of churchgoers witnessed his ascension into nirvana, with people saying the “sky looked different” around 10.30 am on Sunday.

Apparently as Mboro was about to begin his sermon, a beam of light shone down from the sky.

Many feared he had been taken by aliens, and was relieved to learn he was only whisked away to paradise.

Luckily he had his Samsung Galaxy S5 with him, and took a selfie of him chilling with the angels

Now, you might be thinking, “Hey, he has pictures from his smartphone, so we get to see proof then?” … well yes, but it will cost you …

A spokesperson for the church told the Katlehong Weekly: “The pictures will be made available to the public on his Facebook page later next week and can now only be accessed through a R5 000 pledge.

“Those who need the pictures can contact the church and make the pledge using Money Market then we will send them the pictures on WhatsApp.”

Oh come now, you can guess …