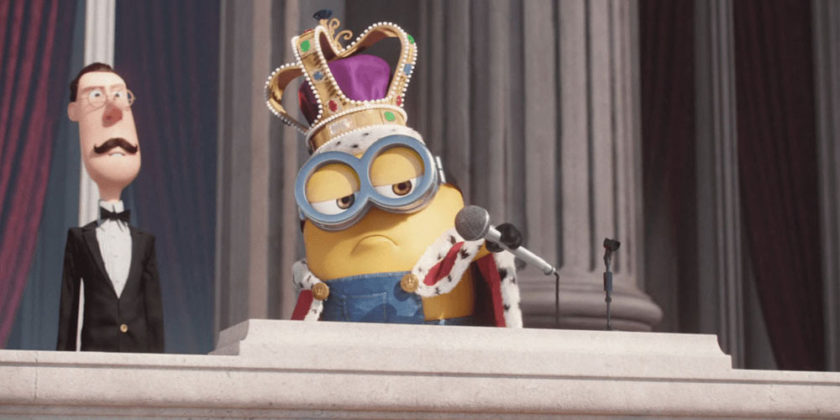 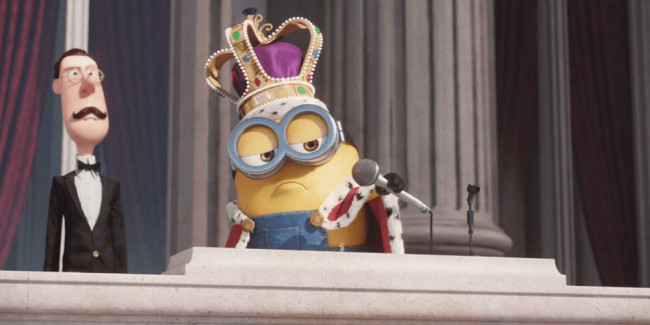 OK, so the weekend is upon us and it is time to chill. Yesterday was the 1st April, so did anything fool you or was it all obvious? Anyway, regardless of how that played out personally for you, it does not always turn out the way that the pranksters intend. This year Google managed to seriously screw things up with their Google Mic Drop, but it is not the only prank disaster ever, so starting with this year’s Google fiasco as the first, I bring you my top 5 April Fool prank disasters.

This is funny for us because one of Google’s many April Fool gags has been a catastrophic disaster for them this year. They introduced Gmail Mic Drop. This was basically a special Send button within emails that would automatically append a gif of a minion dressed as the queen dropping a microphone to the end of your email, and then rolled that out to everybody … but things did not quite work out as planned ….

Unfortunately, the way the company decided to implement the Mic Drop feature was by simply placing the button on every user’s compose window, making it easy enough to hit accidentally. Web developer Andy Baio quickly started cataloguing some of the users who had been undone by the change.

One, who posted on the company’s Gmail help forum, wrote: “Thanks to Mic Drop I just lost my job. I am a writer and had a deadline to meet. I sent my articles to my boss and never heard back from her. I inadvertently sent the email using the ‘Mic Drop’ send button. There were corrections that needed to be made on my articles and I never received her replies. My boss took offence to the Mic Drop animation and assumed that I didn’t reply to her because I thought her input was petty (hence the Mic Drop). I just woke up to a very angry voicemail from her which is how I found out about this ‘hilarious’ prank.”

He was not alone, and apparently quite a few users accidentally did this for very important emails and as a result Google have rather a lot of very angry users … so in effect they ended up pranking themselves this year and had to rapidly pull the gag.

This of course was not their only prank, they always have lots and so we also got “Google Cardboard Plastic” (a transparent box that you strap to your face to enable “Actual Reality”), Searchable Socks (which lets you find your socks with the Google app) and Google Maps Disco (which lets you watch Pegman dancing to Funky Town).

Next up is the topless barber. 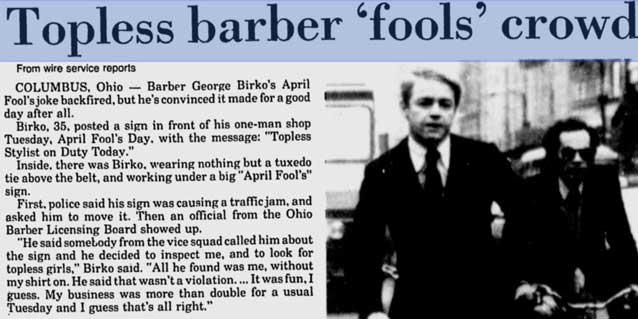 George Birko, a barber in Columbus, Ohio, went to work without a shirt on — wearing only a bow tie and pants then puts up a sign in front of his shop that read: “Topless Stylist on Duty Today”. The problem was that this was 1980 and it attracted way too much attention.

Traffic proceed to back up and so they police had to get involved. It also got attention from the state’s licensing board, a representative swooped to shut things down after being tipped off about it by the vice squad.

The previous one was Columbus in Ohio, and so is this one, so I can only conclude that it must be the local water.

A new employee called her boss to tell him, as a joke, that a robbery was in progress. The plan was to quickly call him back and say that it was just a joke, but he was just too quick … 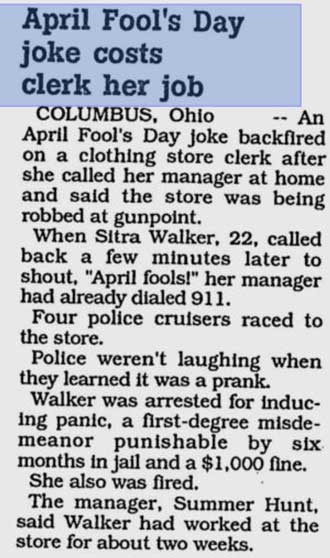 “Near Nashville yesterday John Ahrens, a farmer, planned an April fool joke on his wife with disastrous results. He disguised himself as a tramp, fastened a white mask over his face, and knocked at the door. When she appeared he ordered her to get dinner for him. To his horror his wife fell to the floor in a faint and died an hour later. Ahrens has been married only a few months and idolized his wife. Her death has crazed him with grief and remorse, and he threatens to take his own life.”

Our final one involves a prank with a gun that the bartender was quite sure was an old unloaded weapon. Hmmmm, guns and alcohol, now what could possibly go wrong? The Indianapolis Star of Apr 2, 1915 tells us …

James Pooley, a bartender in Evansville, Indiana, shot and killed Frank Stein, a saloon porter. Pooley claimed he thought the gun was unloaded and was playing an April Fool joke on Stein. Walter Schmidel, owner of the saloon, later admitted that he had removed an old weapon that had been behind the bar and had replaced it with a loaded revolver

So those are my top five April Fool disasters … but let’s not end on such a dreary note, and instead move to a truly skeptical prank that worked out OK.

The QED conference takes place each year, and earlier on during the week the QED folks announced …

… and when Fri rolls around, we then got a list of speakers posted that were as follows …

If you are familiar with the skeptical community then you will understand why that list is simply hilarious and beats the Royal Institution announcing that the Christmas Lectures will be exploring Astrology. 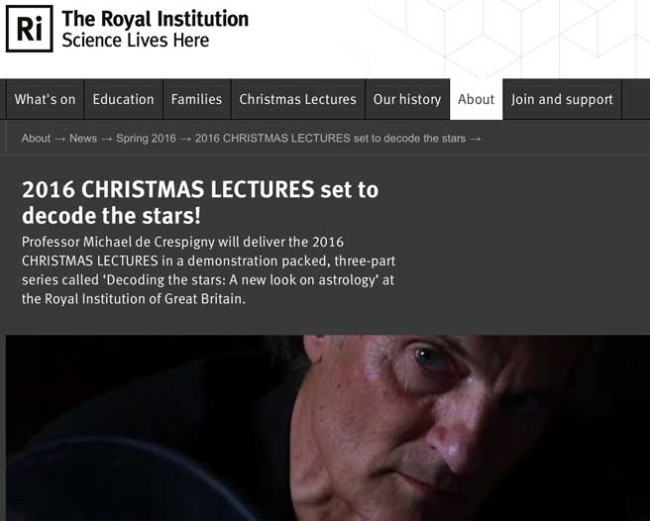 Perhaps in one sense the 1st April is an effective international skepticism day and acts as a beacon because no matter who we are or how smart we might like to think we are, we can all still be fooled … no exceptions.