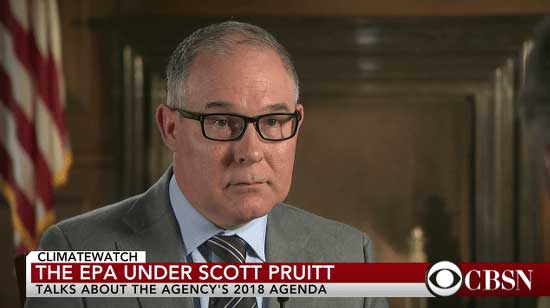 When you do a weekly posting of news items related to religious weirdness, then there comes a point at which you might be tempted to consider the idea that you will no longer be surprised by the items that pop up, and instead you come to anticipate a specific mode of behaviour. I do confess that I did toy with the idea, and so inevitably, something popped up to prove me quite wrong about that.

Reading the news of item 2 below in which a Pastor and his wife pulled a gun on a Sunday school teacher while she was teaching her Sunday school class in church and then robbed and physically injured her is most definitely in a category that can best be described with the term “WTF”.

So anyway, Below you will find this week’s selection of three news items of religiously inspired weirdness from the past seven days.

Item 1 – EPA Head Scott Pruitt: “God Gave Us This Planet, So We Can Destroy It”

We already know that Scott Pruitt, the head of the Environmental Protection Agency (EPA), is a climate denier. He doesn’t care what scientists have to say about the very issues he oversees. That’s why it won’t surprise you that he’s completely behind the push for coal and oil, despite the harm extracting those resources.

What is surprising, maybe, is the reason he’s giving for doing that.

It has nothing to do with science. Instead, he says drilling for oil and mining coal is what God wants us to do. He said as much during an interview with (you guessed it) the Christian Broadcasting Network.

“The ‘environmental left’ tells us that, though we have natural resources like natural gas and oil and coal, and though we can feed the world, we should keep those things in the ground, put up fences and be about prohibition,” Pruitt said. “That’s wrongheaded and I think it’s counter to what we should be about.”

…Pruitt believes God commands us to take care of the environment and that also means to use what He has provided. “The biblical world view with respect to these issues is that we have a responsibility to manage and cultivate, harvest the natural resources that we’ve been blessed with to truly bless our fellow mankind.”

In other words, God gave us this planet, so Scott Pruitt thinks we can destroy it. It’s what Jesus wanted.

So there you go then, drill all the oil up, toss gigatons of CO2 into the atmosphere, and chill because Jesus will sort it all out.

One little flaw … there is not going to be any sorting out by Jesus, we will reap the consequences of our own actions.

“reality must take precedence over a fantasy, for Nature cannot be fooled.”

A Toledo paper reports the rather strange story of a robbery by a Paster, his wife and daughter …

A downtown Toledo pastor and his family are accused of robbing a Sunday school teacher at the church over the weekend.

St. Paul’s AME Zion Church Pastor Anthony Morris, 49, along with his wife, Zelda Morris, 46, and 19-year-old daughter Kamali Morris, are each charged with aggravated robbery with a deadly weapon, a first-degree felony.

Nickema Turner, 39, of Maumee was teaching Sunday school at the church, 954 Belmont Ave., when the younger woman grabbed her by the hair, according to a Toledo police report.

Mrs. Morris then began punching Ms. Turner, police said. The pastor also pushed Ms. Turner to the ground, according to the police report.

During the assault, Mrs. Morris is accused of dumping items from Ms. Turner’s purse and taking them.

Ms. Turner attempted to recover her belongings when Mr. Morris allegedly pulled out a gun and pointed it at her, police said. The woman told police the pastor threatened to kill her.

Two prescription bottles, a Taser, and a cell phone were taken from Ms. Turner’s purse, according to the police report. The cell phone was recovered, but the glass was broken.

The Morris family, who reside in the 3000 block of Evergreen Road, fled the church before police arrived. The couple have been arrested, though the daughter has yet to be located, according to Toledo police.

Ms. Turner was treated at the scene by Toledo Fire and Rescue crews. Ms. Turner and independent witnesses verified the information to police detectives.

You can only wonder something along the lines of WTF was that all about?

It turns out this this is what was going on …

According to the police report cited by ABC13, the pastor’s wife stated to the victim’s daughter: “You wanna know why this happened? It happened because your mom slept with my husband.”

So there you go then, the Pastor was in fact bonking the Sunday school teacher, and that’s not such a surprise. Its the response that is, and that included him pulling a gun on her during all of this. He had somehow apparently managed to con his wife and daughter into believing that it was entirely her fault.

Via Right Wing watch, we have this gem from a CPAC (Conservative Political Action Conference) speech this week …

Declaring that conservatives and Republicans must mobilize to vote in the 2018 midterm elections in order to prevent Democrats from gaining control of Congress, Gorka said that if Hillary Clinton had become become president in 2016, “we would have lost our republic.”

“If you ever had a doubt that God exists, guess what?” Gorka said, “November the 8th all the proof you need. Why? Because [Clinton] had it all, she had the media, she spent $1.4 billion on a seat, on a position, she thought was owed to her because of her gender and her last name, but she lost!”

If indeed his evidence that God is real is Trump, then that is apparently also evidence that God is a real twit for selecting an incompetent dishonest and utterly corrupt non-religious buffoon to be his man instead of a lady who happens to be a committed Methodist or her running mate who is a devout Catholic.