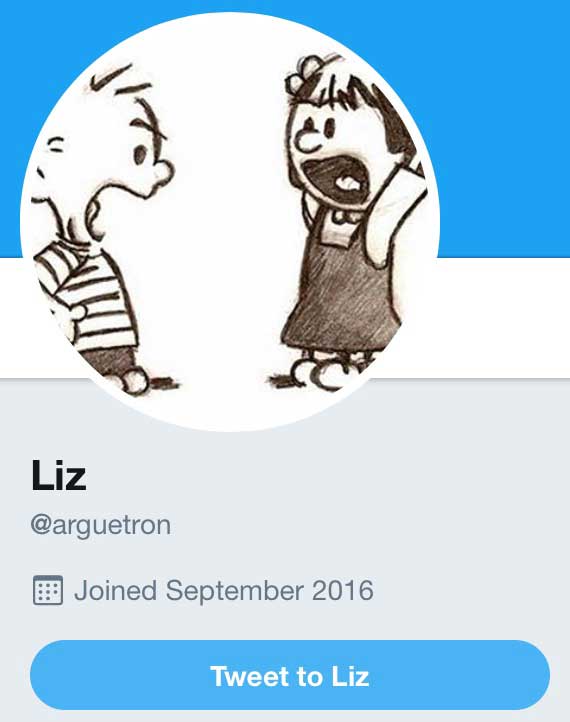 I was posting yesterday about how to spot bots. That is perhaps an important skill to develop because we live in an age where bots with a very specific malicious intent are being deployed to deceive and manipulate you by masquerading as a human. They promote extreme ideas, not because it is one that those behind it actually endorse, but simply to sow the seeds of discord, game elections, and generally polarise.

Not all bots have that specific intent, and so here is a story about one that is a bit different.

First, let’s have a bit of background.

Sarah Nyberb is a name most will not know, but if the term gamergate is familiar, then perhaps you do know her name. She ended up being a target of one of the largest and vilest organised harassment campaigns by a right-wing hate mob. I don’t intend to get into her story here in great detail, but instead will point you at an article she wrote about it all and quote a few snippets ….

If you’ve interacted with or publicly shown your support for me on twitter within the past few weeks, you’ve likely been accosted by an army of frothing reactionaries insisting that I’m a terrible person; often this is accompanied by “proof” in the form of screenshots, conspiratorial Youtube rants, or links to Breitbart.

… Facts are omitted and considered irrelevant; disinformation campaigns are spun up to remove sympathy for the targets and dehumanize them. Often, accusations are fabricated out of whole cloth. It’s never about the truth, but instead what they can twist, distort and lie about in an attempt to destroy and silence us.

… It was clear to almost everyone that what was happening to me was the result of a malicious, hypocritical harassment engine.

…I am okay, for now, but would not be holding up were it not for the faith and support of unambiguously good people.

Now let me introduce you to the bot. 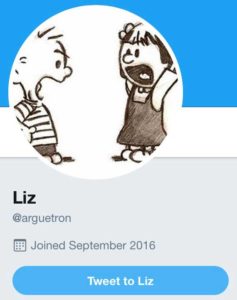 Seriously now, a twitter account with the handle Argue-Tron and that Avatar, is clearly marking it out as an in-your-face bot, and so you would have to be incredibly stupid to not realise that … and yet many don’t.

Every hour the bot will tweet out roughly about half a dozen tweets that are designed to troll a very specific group consisting of Trump supporters, anti-vaxers, Breitbart fans, 4chan denizens, gamergaters, the transphobic, etc…

Inevitably, and deliciously, the bot gets a bite (or is that byte), because somebody will take the bait and proceed to have a long screaming match with it.

OK, so what is the connection here between Sarah and @arguetron?

The answer is that Sarah created the bot, it is hers.

This is simply wonderful. She has reaped a truly delicious revenge by creating a bot that specifically targets the vile sub-culture that viciously harassed and attacked her. Those within it who take the bait now waste countless hours quite literally arguing online with nobody at all.

That is a truly beautiful revenge.

The Media Loved it

The most well-received project I’ve launched was arguetron, a twitter bot that tricks nazis, reactionaries and internet assholes into arguing with it for hours at a time. It received international media attention ranging from sites like Gizmodo, NY Mag, Daily Dot, The Verge, Australia’s SBS Comedy, a segment on the Young Turks and even a feature in Le Monde.

As explained within one of those referenced articles, The Verge …

The internet’s alt-right are mistakenly arguing with a bot

… Nyberg told The Verge that it was important to her that the bot take the high road even when dealing with more vicious online personalities, saying “it never confronts people, only replies, and doesn’t engage in any sort of bigotry or harassment as a response.”

… Nyberg says the goal of the project is “to expose the hypocrisy of the sorts of people who say ‘feminists’ and ‘social justice warriors’ are hypersensitive. Even just mild statements of fact can have them absolutely freak out — and end up sending abuse, even — to a bot that responds calmly and just explains over and over again that they’re wrong.”

And to be clear, these tweets must be sought. As Nyberg notes “the bot stays in its own corner of the internet, tweeting simple things like ‘never listen to donald trump’ or ‘trans women are women,’ yet it’s enough to outrage a lot of the reactionaries that search for people to have fights with.”

Some of these go back to when the bot first emerged, and yet even after all this time, they truly are wonderful …

seriously, the bot is just like honey for internet jerks

they spend hours and hours yelling at it pic.twitter.com/y8igW3osm7

this infowars egg is the record holder

it argued with the bot for… almost TEN HOURS. yes, really. pic.twitter.com/DiQdNd8azw