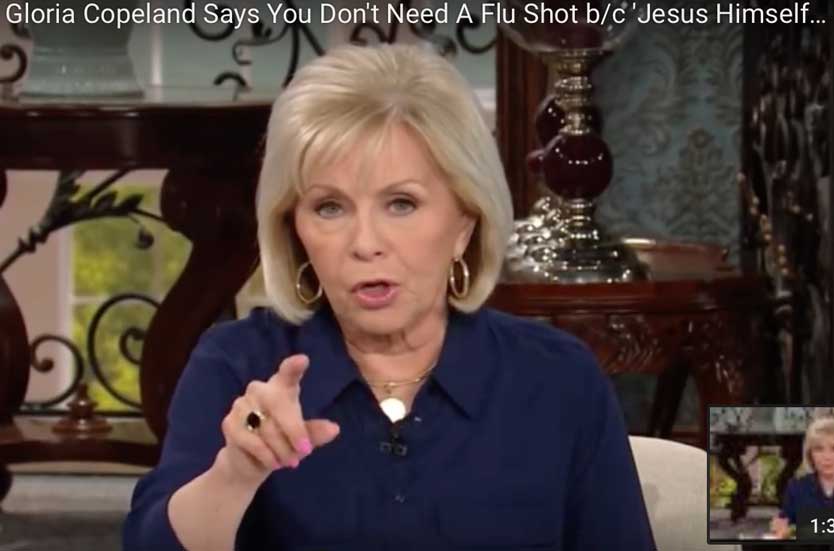 I’ve been doing these weekly posting of weird religious news items for a few months now. You might wonder if there is ever a week when nothing really weird makes it into the news cycle. Has this week been such a week?

So far, each and every week I have no problem randomly picking my personal selection of three items of religiously inspired weirdness.

Here is this week’s selection.

So the background context is that Michele Bachmann, the right-wing deeply religious former congresswoman, stated that she would seriously consider running for the senate if god gave her a sign.

As a bit of background context, she is not simply a moderate who happens to be religious, but rather is a batshit crazy religious extremist that has come out with a sufficient degree of absurd stuff to motivate other rather prominent Republicans to balk at the idea of supporting her. For example …

Former Secretary of State Colin Powell[96][97] and former Minnesota Governor Republican Arne Carlson[98] said that her comments had influenced their decisions to endorse Obama for president.

So did she really claim that she would run if god told her to? Yes she did, here she is on Jim Bakker’s show about a month ago saying this …

Actually it came via satirist who uses the name God. Whoever is behind this managed to raise $7,000 to do it.

Often the best response to religious extremists is not to rant and rave, but instead to deploy satire and humour.

Item 2 – Gloria Copeland: No Need For Flu Shots Because ‘Jesus Himself Gave Us The Flu Shot’ 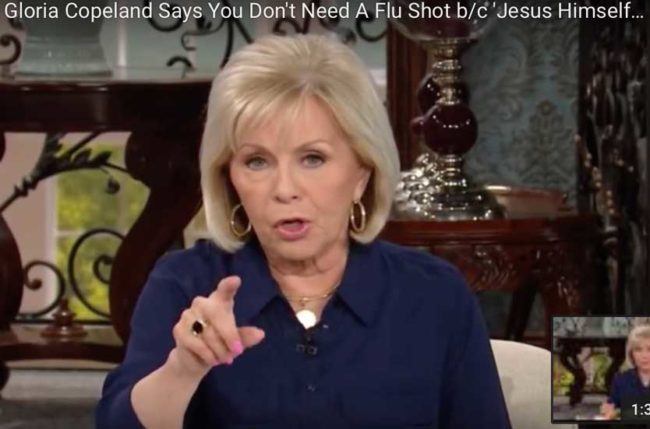 Back in 2013, the Texas megachurch run by televangelist Kenneth Copeland, a member of President Trump’s faith advisory council who recently became the proud owner of a Jesus-provided private plane, was at the center of a measles outbreak that was attributed to the church’s belief that congregants can forego vaccines because Jesus will protect them from illness.

You’d think that given past experience, Copeland’s Eagle Mountain International Church might have learned a lesson, but you’d be wrong, as yesterday a video was posted on the ministry’s Facebook page featuring Copeland’s wife, Gloria, telling people that there is no such thing as flu season and that they don’t need to get a flu shot because “Jesus himself gave us the flu shot.”

“Listen partners, we don’t have a flu season,” Gloria Copeland said. “And don’t receive it when somebody threatens you with, ‘Everybody is getting the flu.’ We’ve already had our shot, He bore our sicknesses and carried our diseases. That’s what we stand on.”

Praying for those who may already have the flu, Copeland proclaimed, “Flu, I bind you off the people in the name of Jesus. Jesus himself gave us the flu shot, He redeemed us from the curse of flu.” Those who don’t have the flu, she promised, can protect themselves by simply declaring, “I’ll never have the flu.”

“Inoculate yourself with the word of God,” Copeland advised.

So there you go them, no need to worry about medicine, or science, or facts, or reality, because all you actually need is “magic”.

An Irish priest and exorcist is asking the country’s bishops for more support after noticing a dramatic increase in demonic activity in the country.

In a recent interview with The Irish Catholic, Fr. Pat Collins said he has been overwhelmed with the number of requests for exorcisms from the faithful in Ireland. In an open letter, he has urged the Irish bishops to train more priests to deal with the demand.

“(I)t’s only in recent years that the demand has risen exponentially,” Collins told The Irish Catholic.

Collins’ comments are on par with those of other exorcists throughout the world, including the International Association of Exorcists (IAE), a group of 400 Catholic leaders and priests, which has reported a dramatic increase in demonic activity in recent years.

Least you wonder, here are a few things to mull over when reading such a story …

To illustrate that point …

Additionally, there is a form of monomania called demonomania or demonopathy in which the patient believes that he or she is possessed by one or more demons.[39]

Regarding the supposed subject matter expert, Fr Pat Collins, his actual medical training is … , yes you guessed it – exactly zero.

Oh and least you wonder if this is an official Catholic position, the writer of the article in Catholic News Agency reached out to the Bishops and was advised …

“this office has not been made aware of any cases of ‘exorcism’ in Ireland in recent years,”

In other words, the actual examples of demonic possession that can be cited is  – exactly zero.

Call me a tad skeptical, but I’m not exactly finding that this aligns with the claim made by Fr Collins that their has been a “dramatic increase in demonic activity in the country”.

I can’t help but wonder if this is all in any way related to the observation that while drinking in most places is a hobby, in Ireland it is a profession. (Given that I’m Irish and was born in Ireland, I’m permitted a pass on that last bit of self-deprecating humour).