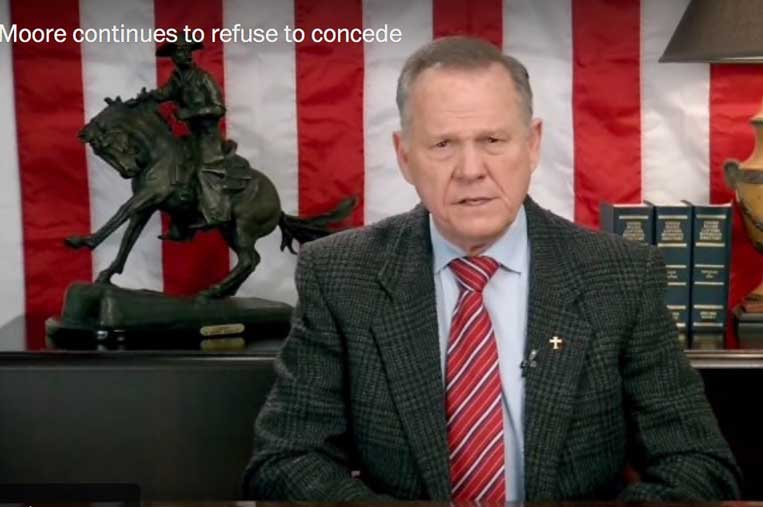 This week my Weekly Weird Religious News posting will be an Alabama election special. As you can perhaps anticipate there has been much religiously inspired weirdness that quite naturally pops up in the news cycle when a complete lunatic takes centre stage.

To our universal relief, he lost, so clearly the majority of people in Alabama are not crazy enough to elect somebody who appears to be the political wing of the old testament … but that did not prevent those that are from popping up.

Here is my personal selection of three items of religiously inspired weirdness.

Ted Crockett is Roy Moore’s spokesman. When being interviewed on CNN by Jake Tapper, he was asked why he objects to a Muslim being in Congress. When followed is  … well I’ll let you see it yourself ..

TAPPER: Judge Moore has said that he doesn’t think a Muslim member of Congress should be allowed to be in Congress. Why? Under what part of the Constitution?

TAPPER: You don’t have to actually swear on a Christian Bible. You can swear on anything, really. I don’t know if you knew that…

CROCKETT: Oh no, I swore on the Bible. I done it three times.

TAPPER: I’m sure you have. I’m sure you picked a Bible, but the law is not that you have to swear on a Christian Bible. That is not the law. [Long pause] You don’t know that?

CROCKETT: I know that Donald Trump did it when we made him president.

TAPPER: Because he’s Christian and he picked it.

What is funny about this exchange is watching Mr Crockett’s face as his brain proceeds to go through a complete reboot when faced with the hard wall of reality as he begins to potentially grasp that we don’t actually live in a religious theocracy.

To be honest I suspect he might have actually sworn on a bible more than three times, but he would not have known that because I suspect three is about as high as he can count.

What is also perhaps deeply ironic is that those swearing an oath on the bible are doing so on a book that actually contains a verse telling them explicitly to not do that. (Matt 5:34-37)

Kevin Swanson is a pastor who vigorously promotes an anti-gay message. It is perhaps inevitable that he also has something to say about Roy Moore’s loss. Via Right Wing Watch … 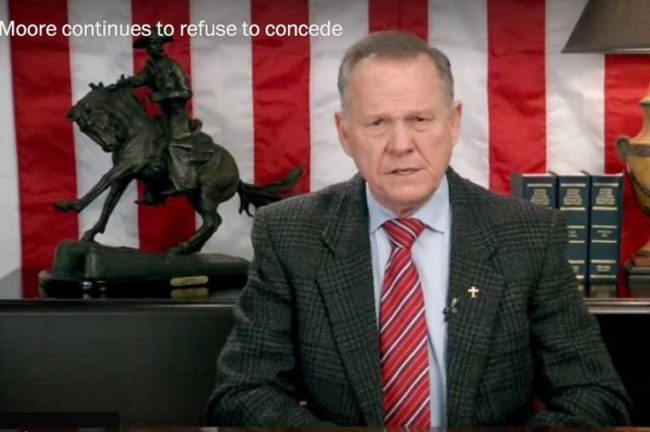 Roy Moore was quite convinced that he was God’s chosen man and so having now lost he refuses to come to terms with that. The Washington Post reports things as follows …

It was a four-minute fire-and-brimstone video about abortion, same-sex marriage, school prayer, sodomy and “the right of a man to claim to be a woman and vice versa.”

“We are indeed in a struggle to preserve our republic, our civilization and our religion and to set free a suffering humanity,” Moore said. “Today, we no longer recognize the universal truth that God is the author of our life and liberty. Abortion, sodomy and materialism have taken the place of life, liberty and the pursuit of happiness.”

I suspect Mr Moore will have not actually read that article because the Washington Post is not exactly going to be his go-to source for news these days.

As for “Setting free a suffering humanity” and also “preserving our republic“, we can tick both those boxes because he lost the election.