Last year Bangladesh blogger Asif Mohiuddin was brutally stabbed by the Islamists, and then arrested for the crime of being an atheist and sent to jail.

(I blogged about it here and also here and here)

Well, I have a fabalous update for you. Asif attended the World Humanist Congress last weekend in Oxford and has an amazing story to tell. That is him below sitting beside Nick Ross. 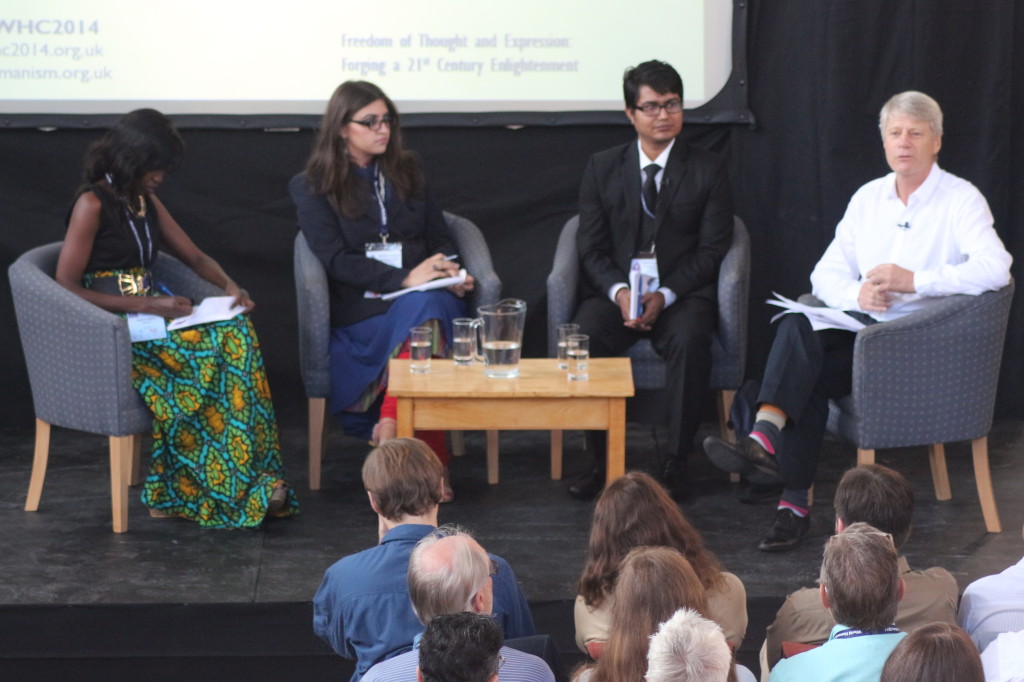 In early 2013, Mohiuddin was attacked and brutally stabbed in the back, shoulder, and chest by a group of radical religious fundamentalists affiliated to Al-Qaeda, after he publicly criticised Islam and Sharia law on the internet. A month later the Bangladeshi government banned his blog on the basis that it was hurting the religious sentiments of Muslims in the country, before arresting him after a million madrassa students mobilised in condemnation of his comments.

Mohiuddin, who had just finished speaking in a session on extreme threats to freedom of expression, collected the award on behalf of fellow atheist bloggers Rasel Parvez, Subrata Adhikari Shuvo and Mashiur Rahman Biplob. The award will be shared posthumously with the late Ahmed Rajib Haider, who was hacked to death on the streets of Dhaka for supposed blasphemy last year.

Making the award, Alom Shaha, a trustee of the British Humanist Association and author of The Young Atheist’s Handbook, commented ‘This award is for al those bloggers who would not retreat; it is for those who were arrested and detained on grossly unfair charges’.

His actual presentation during the WHC was also very moving.

After the stabbing, he explained that he later sought out his attacker, confronted him and asked him “why?”. It turns out that his attacker was simply an impoverished kid who had been steeped in Islam and knew nothing else except the indoctrination that he had received in a madras. Asif’s response was to reach out to him and help him by getting him some food that he badly needed. It was quite moving to listen to Asif tell us about this.

Personally I was both trilled to see him safe and also deeply honoured to meet this truly amazing individual, who in the face of extreme adversity, has demonstrated the heights to which the human spirit can aspire.

Here is a rather fuzzy picture of us both (it was dark outside when I managed to catch up with him). 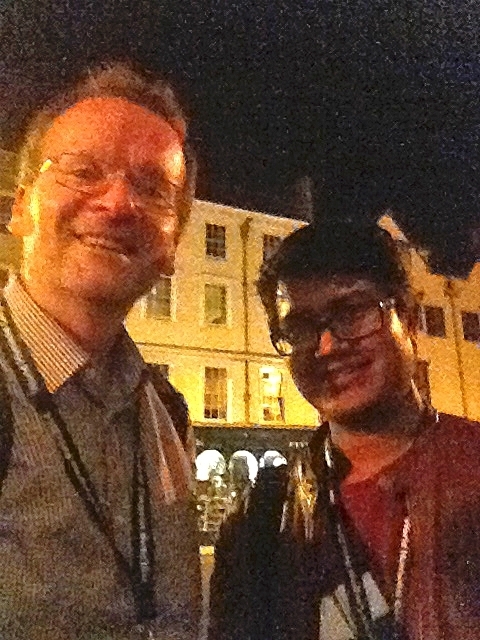 I never block any religious fundamentalist from my Facebook although they very often threaten me with death and call names. I do this because I believe the doors of thoughtfulness should never be closed, the calls of taking the path of progressiveness should never be barred. If I block them from my Facebook, if I bar them from reading what I have to write, then probably they will remain ever deprived of that very call that I believe every individual should hear and respond to. I have no hatred towards the people who tried to kill me. This is because I know they do not know what they are doing, they are senseless, at least for the time being. They have been taught and trained in this way, they have been brainwashed into hating and killing. My attempted murderers be brought into trial and punished is not the first thing that I want. I rather want this senseless practice of indoctrination and brainwashing be abolished someday. – Asif Mohidduin

Translation of a blog posting by Asif about the events