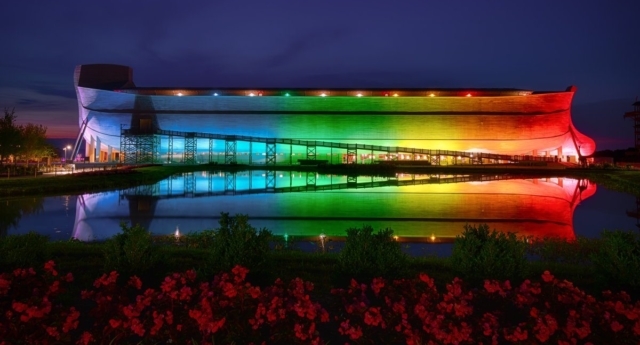 This week quite a lot has been happening over in Kentucky at Answers In Genesis, so much so, that I’ll make this week’s selection an Ark Encounter special edition.

Pictured above you can see that the highly homophobic organisation has decided to brighten up their life-sized Ark theme park this week with Rainbow colours. Pink News has noticed and they are loving it …

Ham said: “In recent times the rainbow has come to represent… the LGBTQ movement.

“Indeed when the US Supreme Court legalized gay ‘marriage’ last year, the White House was lit up in rainbow colors.

“Sadly, people ignore what God intended the rainbow to represent and proudly wave rainbow-colored flags in defiance of God’s command and design for marriage.

“Because of this, many Christians shy away from using the rainbow colors. But the rainbow was a symbol of God’s promises before the LGBTQ movement—and will continue to be after that movement has ended.

“As Christians, we need to take the rainbow back and teach our young people its true meaning.”

However, when Ham posted a photo of the Ark on Twitter, much of his intention was lost.

One fan wrote: “check out this gay boat!”

Another added: “That’s the most beautiful gay boat I’ve ever seen! Such personal growth is hard. Yet you overcame hate to see the light. God would be proud.”

Reality host John Giddings said: “That is ABSOLUTE GAYEST BOAT and I 💯💯💯 LOVE IT. #LoveWins

“Will you have a gay animal couple in there?! Penguins are overplayed – I say make the dinosaurs you have in there gay!”

He joked: “The town next to this Ark invested all this money into making it a destination but not much tourism. Now the gays can come help! #ArkParty 🌈”

OK so that rainbow story from the past week at the Ark Park is just a bonus starter and is not one of my Top 3 ark related items, those are below.

What happens when some young earth creationists are faced with something that is quite absurd, for example a belief that the earth is flat and not a sphere. Since these same flat earth believing folks have lots of bible verses that verify that this is what the bible says, will the creationists simply accept such an absurd claim because the Bible says so?

Hell no, instead this is what happens …

Within the above clip Godless Engineer has extracted from the full Answers in Genesis (AiG) broadcast a few gems. Roughly about one minute in we get this dialog …

Danny Faulkner: … Some people, they accuse us of believing everything in the Bible is literal. Well, we don’t believe everything in the Bible is literal! There are many idioms. There are figures of speech. There are also imagery, particularly in the poetic and the prophetic passages… For instance, Jesus said, “I am the door.” Well, did he have hinges? Did he have a latch on it? Did he have a handle? Of course not! We understand that it’s not a literal door. So nobody really believes that the Bible’s completely literal…

Georgia Purdom: We need to take the Bible as it’s written. Not everything literally. I don’t know anyone that does that…

Remember, this comes from Answers in Genesis, the Organisation that quite literally takes the bible literally. They promote the idea that not just planet earth but also the entire universe is just 6,000 years old and that it all happened in just seven calendar days.

Why do they believe this?

They spent at least $100 million building this religious folly, and that itself is quite astonishing. This week we discover that they took financing to new heights of craziness by selling it all for just $10.

The background story here is that the nearby town of Williamstown (Kentucky) gave them $62 million using tax increment financing of bonds. They had been sold the idea by Answers in Genesis that the Ark was going to bring in lots of tourists and would also bring lots of jobs. They basically got screwed and ended up with no tourists and no jobs. Hemant Mehta has posted the background details to it here …

Having received a sweetheart deal to build Ark Encounter there, promising to create jobs then later saying they were only available to other fundamentalist Christians, and taking money from employees’ paychecks to help repay loans

So the town responded to all this by charging a “safety fee” of 50 cents per ticket. This is actually quite common for many ticketed attractions, it helps local authorities to fund the increased strain caused by the very existence of such attractions (the need to ramp up emergency response equipment).

The AiG response was to happily agree and … oh wait, no that is not what happened. Instead they played a sneaky tax dodging trick. On 17th July, a local paper reports …

Ark Encounter LLC sold its main parcel of land — the one with the large-scale Noah’s Ark — for $10 to its nonprofit affiliate, Crosswater Canyon. Although the property is worth $48 million according to the Grant County property valuation administrator, the deed says its value is only $18.5 million.

…Ark Encounter’s maneuver is a precursor to declaring itself exempt from all taxes, including property taxes that help finance Grant County schools.

“I believe this is the first step,” Williamstown city councilman Kim Crupper said. “The impact would be far larger than just Williamstown.”

These god-loving creationists are displaying an amazingly low ethical standard here. The town and local community offered a huge degree of financial support, and are now finding that every trick in the book is being played to avoid paying a very modest local tax Just 50 cents for each $40 ticket.

In the context of Item 2 above, the sneaky tax-dodging trick that AiG pulled, the state of Kentucky very quickly responded during the past week by withdrawing an $18 million tax break.

The tax break only applies to for-profit enterprises. Since they sold it all to their non-profit to avoid paying a local tax, they have in effect disqualified themselves from receiving the $18 million tax break.

On the 18th July a formal letter was sent by the Kentucky Tourism, Arts, and Heritage Cabinet to Ark Encounter explaining this to them in no uncertain terms …

Net effect: The sneaky tax dodge (item 2 in the list) that is estimated to enable them to avoid paying about $700,000 in taxes, has in effect cost them an $18 million tax break to achieve.

They really really are not very smart. However, since they are seriously promoting the idea that planet earth is just 6,000 years old as a fact, then I suspect you had already worked that out.

How will this play out?

They have 30 days (starting 18th July) to roll things back. When faced with either paying a $700,000 local tax or enduring the loss of an $18 million tax break it looks rather obvious. However, you never can tell with these folks.