Since yesterday was an “Ark Special” posting all about the latest antics at the Answer in Genesis Ark Encounter, it is perhaps appropriate to follow that up with an update on who might take a belief in a 6,000 year old earth seriously. 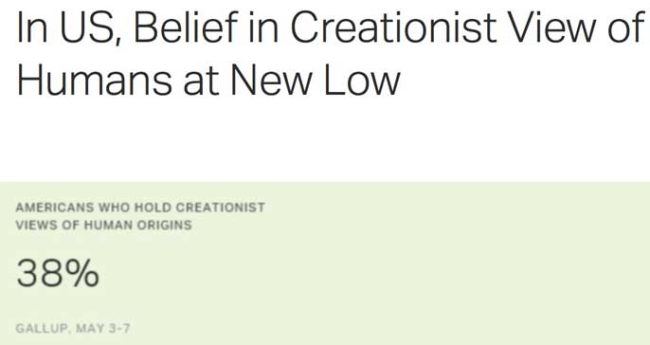 … or to turn that statistic around and look at it from the other viewpoint – 57% believe in some form of evolution — either God-guided or not — saying man developed over millions of years from less advanced forms of life. 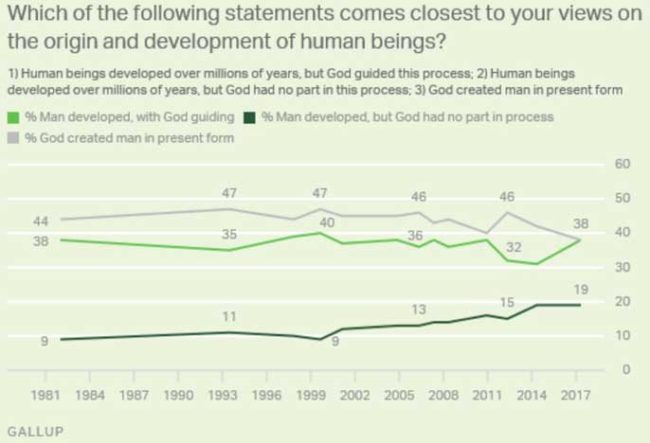 What is clear is that while a vast majority still happily accept that God plays a role, many are now coming to terms with the mountains of evidence for evolution and the complete lack of anything at all that points to a literal creation of humans as they are now.

Having once been deeply religious myself as a teen, I well recall making this transition. My thinking at the time was that clearly Evolution was indeed correct, and that Evolution was simply how God did it.

For some who lean towards a literalist interpretation of the Bible there is an obvious conflict between scientific fact and faith, but for many, and it now is clear that it is the vast majority, this latest poll reveals that there is a far more pragmatic reconciliation taking place in which scientific fact is happily accepted and is not perceived to be in conflict with a personal belief.

Education has played a Role

What the poll data also reveals is the importance of education. To be specific …

There is another statistic from the polling data that also highlights the role that education plays. When it comes to agreeing that Evolution required no intervention from a God to Guide it –

There is also a Clear Religious Divide in play

I confess that last data point is a bit odd. For those that expressed no specific religious preference, not Catholic, not Protestant or some other variation of Christian, 9% of them still indicated that a God created humans in our present form within the last 10,000 years. I simply have no idea what is going on there. I speculate that for some deeply religious fundamentalists, the response to the question, “what is your religious preference?” might be “none”. This is because they would view their specific belief as “truth” and not a religious preference. From their viewpoint all religion is man-made and their belief is just reality.

While the majority of people in the US still believe that God played a role, there has been a dramatic shift away from acceptance of a strict creationist belief of human origins. Many more have now come to terms with the fact of Evolution by accepting the scientific evidence for it, but then reconcile it with faith by adding that this is simply how God did it.

It is perhaps in some ways akin to previous battles between belief and observational science. The idea that the earth is not the centre of the universe was once considered to be heresy, but is now accepted as true by the vast majority regardless of their specific belief or lack of a belief. It would appear that a general acceptance of evolutionary biology, which is well established with evidence, is heading in the same direction.

Education has played a role in this shift.

Survey methodology, complete question responses and trends available via this link as a PDF.

Here is a more detailed breakdown … 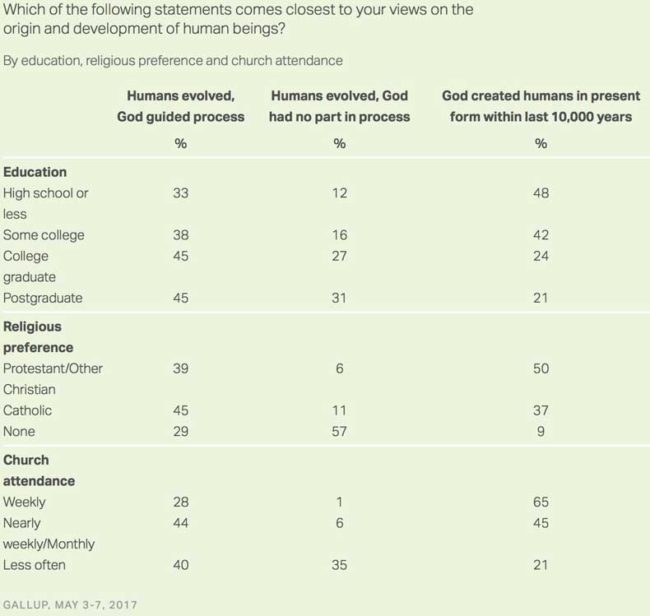