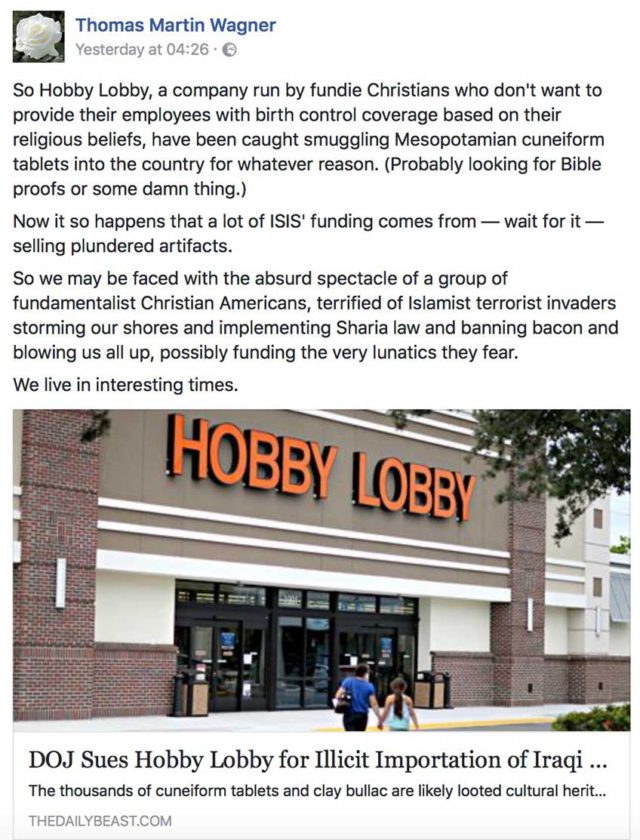 How do those that trulybelieve handle items of religious weirdness?

I recall once attending a bible meeting as a teen (hey, I would try anything at that age). While having lunch, I listened to one chap relate a story to those sitting near him. It was about some bit of weirdness in which he claimed some literal angels had been actually responsible for something. I recall thinking “This is nonsense”, and looked around those listening to see if anybody else was buying this. In the end my conclusion was, “well hey, he is a nice chap, and is just a bit eccentric” and so left it at that.

We tend to filter, it is a natural human response, and when faced with stuff that we can’t process, it gets put to one side and ignored. However, let’s not do that, but instead throw a spotlight upon some of the truly absurd and perhaps provoke a bit of thought about it all.

Here is my personal pick of the top 3 items of religiously inspired weirdness from the past 7 days.

As far as Christian Fundamentalists are concerned, the number one incarnation of evil is perhaps ISIS, and to be frank, they are probably not wrong about that, most would agree. Hobby Lobby is the US based craft chain who became famous a few years back for opposing the Affordable Care Act for their employees because it contains a provision for providing a morning after pill. The Hobby Lobby owners are religious, hence this was a religious stance. They might indeed believe specific things, but ethically what they don’t get to do is to impose that personal choice upon all their employees.

So the news from last week is that they have been smuggling into the US ancient cuneiform tablets and clay bullae that had been illegally obtained in Syria and Iraq so that they can then sell them in their stores.

The black market for such artefacts is used to fund ISIS …

One chap nicely sums it all up within a FB posting … 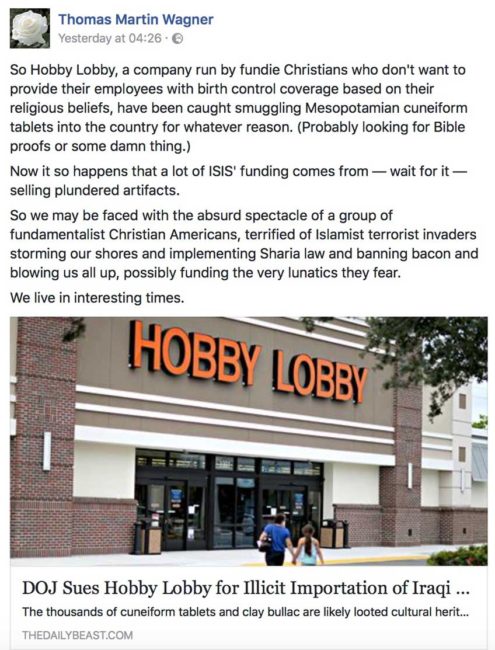 On twitter it is now open season for Hobby Lobby …

@HobbyLobby too "moral" to provide contraceptive coverage to employees, not moral enough to refrain from illegally looting war-torn country

Never noticed this part of the Hobby Lobby website pic.twitter.com/0iJv32nrnB

Hobby Lobby being an alleged front for smuggling black market antiquities out of ISIS territory is only like the 5th weirdest story of 2017.

Number of Conservative Christians seen to be condemning Hobby Lobby for this … I’m deafened by the silence so far. But hey, if they can support a pussy grabbing narcissist who lies about anything and everything, then this should not be a problem for them.

About one week ago, Hemant Mehta posted this …

Sheikh Abd Al-Wahhab Al-Maligi, an Egyptian cleric, appeared on the Al-Seha Wal-Jamal TV channel this past March and argued that female genital mutilation was perfectly fine because there was an economic benefit to it.

In case you’re wondering, there’s no science to back up the idea that women who are mutilated suffer fewer diseases than women who aren’t. There are, however, plenty of problems that can occur to women who have been circumcised.

If indeed you are now getting ready to gather up stones to cast at Egypt, then you might wish to pause for a moment and consider this. The above is from last March, what is below is the punchline from the past 7 days.

The NHS in the UK has just released a report on the new cases of FGM reported in the UK during the past year.

So exactly how many cases do you think there have been in the UK?

The Female Genital Mutilation (FGM) Enhanced Dataset (SCCI 2026) supports the Department of Health’s FGM Prevention Programme by presenting a national picture of the prevalence of FGM in England.

Between April 2016 and March 2017 there were 9,179 attendances reported at NHS trusts and GP practices where FGM was identified or a procedure for FGM was undertaken.

87 per cent of these attendances were in midwifery or obstetrics services, where this was reported. Data for the treatment area was recorded for six in every ten attendances.

The average age at attendance was 31 years. 95 per cent of the women and girls first recorded in the data in 2016/17 had undergone FGM before they were 18 years old. This information was recorded for three in ten women and girls.

The mental contortions that Rightwing Evangelicals are utilising in order to maintain and retain their belief after their popular support for the most non-Christian president ever is truly a wonder to behold.

Frank Amedia, who was a volunteer “Christian policy liaison” for Donald Trump’s presidential campaign before launching a project with fellow “prophets” to create a “POTUS Shield” around Trump’s presidency, visited televangelist Jim Bakker’s program this week to discuss various prophecies he has received around Trump.

Amedia told Bakker that he had heard from God that God had given Trump a “breaker anointing” that had allowed him to break up the Republican and Democratic parties and the news media, so North Korea had better watch out.

Bakker and Amedia then discussed the president’s volatile Twitter presence, which Bakker said was all part of the “gift of wisdom” that God had told him he gave Trump.

Amedia offered that Trump tweets because he gets bored with nonconsequential things, part of his God-given gift of “discernment.”

“I believe he receives downloads that now he’s beginning to understand come from God,” Amedia said.

So there you go then, Trumps batshit insane tweets at 3am are … part of his God-given gift of “discernment.” and his “gift of wisdom”.