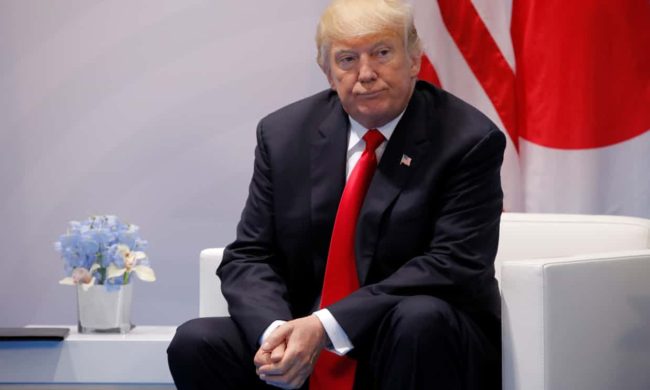 As you are no doubt aware, the way Trump behaved means that the G20 can in many respects be renamed the G19 + 1 when it comes to climate and many other issues.

The UK’s Guardian describes it as follows …

As anticipated, the big bone of contention was Trump’s decision to withdraw America from the Paris climate agreement. This was still being argued over throughout Saturday, as leaders entered their final sessions. The outcome was a 19-1 standoff pitting the US against the rest of the world, as a joint summit statement noted the US withdrawal from the agreement, but leaders of the 19 other G20 nations agreed that the accord was “irreversible”.

The below however is the real cherry on the cake. At one point things became very heated between Trump’s team and the French when the US proposed inserting a reference into the final statement about the US supporting “clean fossil fuels”….

Macron, the French president, set the increasingly robust tone, snapping at one point that the whole world knew it was a mistake for the US to withdraw from the Paris agreement. Sources said tensions ran particularly high between French and US officials, who also clashed over an attempt by Trump’s team to insert a clause into the final communique saying the US would support other countries in accessing clean “fossil fuels”. At one point talks broke up for two hours while the US and France argued over the climate section, according to a source.

The full final text of the G20 leaders statement is available here.

Energy and Climate: A strong economy and a healthy planet are mutually reinforcing. We recognise the opportunities for innovation, sustainable growth, competitiveness, and job creation of increased investment into sustainable energy sources and clean energy technologies and infrastructure. We remain collectively committed to mitigate greenhouse gas emissions through, among others, increased innovation on sustainable and clean energies and energy efficiency, and work towards low greenhouse-gas emission energy systems. In facilitating well-balanced and economically viable long- term strategies in order to transform and enhance our economies and energy systems consistent with the 2030 Agenda for Sustainable Development, G20 members will collaborate closely. Recalling the G20 Principles on Energy Collaboration, we regard energy security as one of the guiding principles for the transformation of our energy systems, and we will continue to work on open, flexible, and transparent markets for energy commodities and technologies. We welcome international cooperation on the development, deployment, and commercialisation of sustainable and clean energy technologies and support financing by Multilateral Development Banks to promote universal access to affordable, reliable, sustainable and clean energy.

We take note of the decision of the United States of America to withdraw from the Paris Agreement. The United States of America announced it will immediately cease the implementation of its current nationally-determined contribution and affirms its strong commitment to an approach that lowers emissions while supporting economic growth and improving energy security needs. The United States of America states it will endeavour to work closely with other countries to help them access and use fossil fuels more cleanly and efficiently and help deploy renewable and other clean energy sources, given the importance of energy access and security in their nationally- determined contributions.

The Leaders of the other G20 members state that the Paris Agreement is irreversible. We reiterate the importance of fulfilling the UNFCCC commitment by developed countries in providing means of implementation including financial resources to assist developing countries with respect to both mitigation and adaptation actions in line with Paris outcomes and note the OECD’s report “Investing in Climate, Investing in Growth”. We reaffirm our strong commitment to the Paris Agreement, moving swiftly towards its full implementation in accordance with the principle of common but differentiated responsibilities and respective capabilities, in the light of different national circumstances and, to this end, we agree to the G20 Hamburg Climate and Energy Action Plan for Growth as set out in the Annex.

If indeed Trump’s plan for making America great again means isolationism, irrelevance, and the decline of international influence, then so far he is on track and is doing wonderfully well.

Meanwhile a bit of Fun regarding that picture 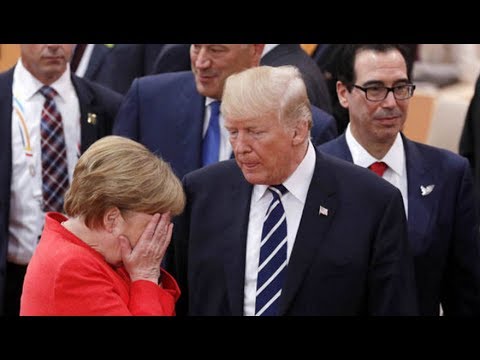 I’ve no idea what Trump actually said to her, but the best suggestion I’ve seen so far is …

“If it was not for us, you would be speaking German now”