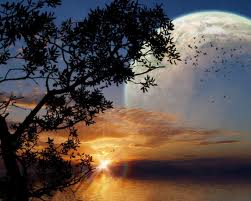 Many years ago when working in Dublin, I was out for a walk one lunchtime on one of those very rare days when that big rather unfamiliar yellow disk in the sky had strangely decided to not shroud itself in a layer of clouds. While meandering along and not paying too much attention, I was stopped by a chap who asked if I’d be interested in attending a lecture. Always interested in learning something new, and also gripped by the pure excitement of rushing back to the office, I thought, “Sure, why not”.

Having anticipated vast crowds, I was rather startled upon arrival to discover that the entire lecture audience was me, there was nobody else who had been foolish enough to agree (that really should have been a clue). In fact, the venue was a rather run-down dilapidated Georgian building of the type that would perhaps cause the Georgian preservation society to simply not bother. I was permitted access to darkish and rather poky room, the sort  you could not really swing a cat in (not that I wished to actually try that), so quite clearly they had never anticipated being overrun by vast numbers, and appeared to find the fact that even one poor sucker (me) had been snared to be a rather novel experience.

After I made myself comfortable, a tallish lanky chap in a suit who would have fitted in quite well within the local undertaker across the street, proceeded to talk about the virtues of his rather odd beliefs. After a few minutes of this, the other chap who had invited me soon appeared to grow the vast audience by 100% (he took the seat next to mine). Was this a strategy to craft the illusion of vast numbers?

As I listened it was immediately apparent that the presentation style was a tad Victorian, no laptops, no projectors, no pre-canned charts, instead it was chalk and talk … quite literally … they were using a good old-fashioned blackboard (yes really).

I soon began to appreciate that those pressing, “Oh my God, how the heck am I going to do this?” problems at work were in fact not all that bad after all. This was dull, really dull. Dull enough to compete in the dull Olympics and win a dull gold. Alas, I was too young then and too polite to simply walk away, so I endured it out of a purely social duty that telling them to “Fuck Off” is not the done thing. (As an aside, I’m old enough and wise enough now to appreciate that time is too short to waste on such social graces in such circumstances). Still, the very fabric of life is woven from such encounters, and so it was perhaps interesting to get a peek inside this lunatic asylum.

In that day and age, I was also young enough to retain some religion, and had not yet grown out of it, but this was a whole order of crazy that was way beyond that normally socially acceptable crazy.

Once I had successfully managed to convey the “I’m leaving” message to them after what I felt at the time had been an appropriate degree of polite listening with glazed eyes, they quickly switched tactics, and proceeded to tell me how truly special I was. They knew exactly nothing about me, I’d simply turned up, yet that by itself was apparently sufficient grounds for them to make that claim. This was something I understood and was immunized to, I could clearly see how it was being deployed to manipulate. By this time, I’d also worked out who they were and what they were about. Once I’d left, they played their last card, the chap who had invited me, proceeded to walk with me as I wandered back to the office. He babbled on about how great this group was (read cult for the word “group”) and how they had branches all over the world. In reply I asked if they also had branches in Korea. That was my way of telling him that I knew exactly who they really were.

It was the Moonies of course, the folks who practise what is known  “Divine Deception” to recruit new members.

So now while indeed the sun has set for Mr Moon, the belief he initiated carries on, Han, Hyung Jin, and Kook Jin Moon have taken over the leadership of the church since his death not too long ago

Tempting as it might be to list the crazy cool-aid they sell, I’ll give that a miss and will simply leave you with the following link. I will however make just one observation, I feel the letter “M” to be a typo and suggest that the letter “L” delivers a better more factually accurate rendering of their name.

Messiah of misery: How the leader of the Moonies went from peasant to billionaire by leading cult that brainwashed millions… until the Daily Mail exposed him as a fraud: In 1978, The UK’s Daily Mail printed a devastating expose of the Moonies’ activities under the headline ‘The church that breaks up families’. The church sued, but the resultant High Court hearing ran for 100 days and finally ended in victory for the Daily Mail.