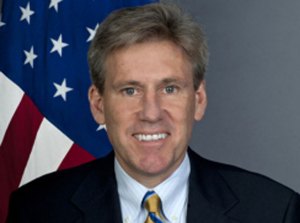 Today we learn the tragic news of the murder of Christopher Stevens, the US ambassador in Lybia. The BBC reports …

Unidentified armed men stormed the grounds on Tuesday night in a protest over a US-produced film that is said to insult the Prophet Muhammad.

They shot at buildings and threw handmade bombs into the compound.

Protesters also attacked the US embassy in Cairo over the film.

Yes, you read that correctly, it was a protest against a movie. The Guardian tells us more about this movie …

An Israeli film-maker based in California has gone into hiding after his film attacking the prophet Muhammad sparked angry assaults by ultra-conservative Muslims on US missions in Egypt and Libya, claiming the life of one American.

Speaking by phone from an undisclosed location, the writer and director Sam Bacile remained defiant, describing Islam as “a cancer”. The 56-year-old said he had intended his film to be a provocative political statement condemning the religion.

Protesters angered by Bacile’s film on Tuesday opened fire on, and burned down, the US consulate in the eastern Libyan city of Benghazi, killing a US diplomat. In Egypt, protesters scaled the walls of the US embassy in Cairo and replaced an American flag with an Islamic banner.

… An English-language 13-minute trailer on YouTube shows an amateur cast performing a wooden dialogue of insults disguised as revelations about Muhammad, whose obedient followers are presented as a cadre of goons.

It depicts Muhammad as a feckless philanderer who approved of child sexual abuse.

It is of course a matter of historical record that Muhammad married a nine-year old girl (Aisha), hence we have the common claim by some critics that he approved of child abuse. But that was the 7th century, a time when many ideas we would find abhorrent were acceptable. Other popular ideas such as slavery were also acceptable then, but no longer are. Should we really judge those from the 7th century by our standards?

There is of course criticism to be had here. The claim that Muhammad received the direct final perfect revelation from the ultimate all-knowing creator of the universe can indeed be challenged because there is nothing within this flow of supposedly divine information that is not also attributable to somebody from the 7th century … no whispers about either slavery or marrying nine-year old girls being a bad idea, no guidance on germ theory, no information at all that was not already known. Instead, we find a reflection of the 7th century mindset that prevailed at that time, and that by itself is a rather inconvenient truth for this claim.

There are degrees of criticism, some appropriate and some not appropriate; personally I’ll opt for the fact-based variety that challenges utterly batty ideas, that if unchallenged, motivates people to behave in an abhorrent manner. However, even when the criticism itself is irrational, and just as equally batty, it can never ever justify a violent response, especially against innocent people.

The violent murder of Christopher Stevens by some religious thugs is also utterly tragic for most Muslims themselves, because while most do hold a religious belief that is not actually true, that in itself need not in any way imply that they are not decent honourable humans who strive to do what is right. Sadly, this latest event simply turns up the heat and blinds many non-Muslims to that reality.

It does not justify rioting or killing people. But let’s not mistake what it is: the movie is the work of a group of incompetent fundamentalist Christian assholes pissing on entire cultures.