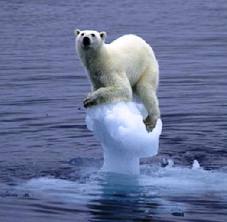 The knowledgeable subject matter experts are yelling, but nobody appears to be really listening …

The BBC reported a couple of days ago …

Scientists in the Arctic are warning that this summer’s record-breaking melt is part of an accelerating trend with profound implications.

… The Norwegian Polar Institute (NPI) is at the forefront of Arctic research and its international director, Kim Holmen, told the BBC that the speed of the melting was faster than expected.

“It is a greater change than we could even imagine 20 years ago, even 10 years ago,” Dr Holmen said.

“As a scientist, I know that this is unprecedented in at least as much as 1,500 years. It is truly amazing – it is a huge dramatic change in the system,” Dr Hansen said.

“This is not some short-lived phenomenon – this is an ongoing trend. You lose more and more ice and it is accelerating – you can just look at the graphs, the observations, and you can see what’s happening.” 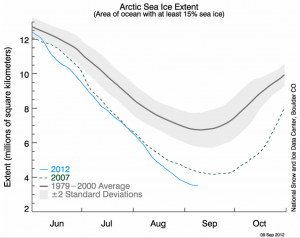 That should have been front page news, but it has hardly warranted a mention. Are we truly that blasé about what is now happened before our very eyes? Did you know that we passed yet another landmark on September 5th. The amount of sea ice in the Arctic dropped below 4.00 million square kilometers (1.54 million square miles). Compared to September conditions in the 1980s and 1990s, this represents a 45% reduction in the area of the Arctic covered by sea ice, but this is not the low, we are not yet at the end of the current melt season.

This is huge news, it means that with all that sea ice now missing, the warmth from the sun is no longer being reflected back, but is now being absorbed by the ocean.

Yesterday in the Guardian, Peter Wadhams, professor of ocean physics at Cambridge University, warned that CO2 levels are rising at a faster than exponential rate, so he would ideally like to see us go on a nuclear binge …

“It is very, very depressing that politicians and the public are attuned to the threat of climate change even less than they were 20 years ago when Margaret Thatcher sounded the alarm. CO2 levels are rising at a faster than exponential rate, and yet politicians only want to take utterly trivial steps such as banning plastic bags and building a few windfarms,” he said.

… Wadhams, who is also head of the polar ocean physics group at Cambridge and has just returned from a field trip to Greenland, was reacting to evidence that Arctic sea ice cover had reached a record low this summer.

This latest rate of loss is 50% higher than most scenarios outlined by other polar scientists and coincide with alarming new reports about a “vast reservoir” of the potent greenhouse gas, methane, that could be released in Antarctica if the ice melts equally quickly there.

Personally, I’m of the opinion that we are stuffed. We will, as we always do, manage to not cooperate and so will end up doing too little too late. The climate will change and sea level will rise, things are happening far faster than expected. The models predicted an ice-free Arctic in the summer by the end of the century, but at the current rate of thaw, it looks like we might get there by 2015. That in turn will speed up the Greenland ice cap melt, increase global ocean levels considerably, and also warm the seabed and release more methane.

We will of course adapt, we always do, but it will result in a considerable degree of disruption to humanity on a global scale.

Right now, doing nothing is not an option, but sadly that appears to be exactly what we are doing.