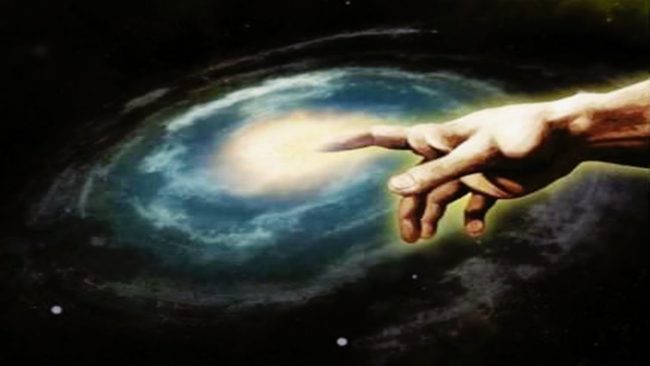 Where this latest “scientific” claim comes from is a conservative “news” site and it is indeed truly weird stuff and quite silly, and yes those air quotes around a couple of words there are well-deserved. Anyway, without any further ado, let’s jump in. The posting by a chap named Matt Barber opens as follows:-

The Big Bang Blows Atheism Sky High: Even Science May Eventually Catch Up to God’s Word

They say there are no atheists in the foxhole.

Even fewer when death is certain.

As was once pointed out by the novelist James Morrow, this opening quip “isn’t an argument against atheism, it’s an argument against foxholes,“. I am also struggling to grasp what numerical quantity he thinks is represented by “even fewer” than none, or for that matter how he knows any of this to actually be factual. Well yes, we know that he does not know, and is simply stringing together a random collection of religious meme’s that, when combined like this, do not make any sense and are not actually factual.

… and Jesus is quoted as saying that labelling your fellow man a fool puts you in danger of hellfire. (Mat 5:22). I should add that labelling those whom you do not agree with as fools is not exactly a heart warming or winning strategy and is perhaps more akin to a breath of fresh air (in the sense that they guy simply gets up your nose).

He then moves on to recount a story about Stalin that he read in a book, that the author claimed he got from another Christian who in turn claimed he got it from Stalins daughter, … and the reason this is credible and is not simply an urban legend is?

Well yes, that is essentially what it is, a wholly unverified whisper that belongs in the pot marked “urban legend”.

So far this is all prologue to what is billed as a science claim concerning God and the Big Bang, and no doubt your skeptical-meter has already overloaded and is now screaming at you for mercy, and yet ignoring that, he tosses out this old canard …

In my experience it is something common among atheists: an inexplicable, incongruent and visceral hatred for the very God they imagine does not exist.

I must confess that the author of all this is indeed truly gifted at spouting complete gibberish. If for example I suggested that he actually believes in the Norse gods, Loki and Thor, and denies their existence because he is just angry with them, then you would think quite rightly that I was nuts, and yet that is exactly his rather bizarre stance here. To back it up he garnishes his article with a few bible verses that assert that god is, well gosh darn, just obvious.

The manifest intentionality and fine-tuning of all creation reveals design of breathtaking complexity. The Creator is of incalculable intelligence and infinite splendor. As I see it, atheism provides a case study in willful suspension of disbelief – all to escape, as the God-denier imagines it, accountability for massaging the libertine impulse.

This is basically a knowledge claim that rests upon the premise that he has no clue how things came about naturally, therefore his specific god quite obviously did it all by magic.

Actual independently verifiable evidence presented that verifies even one single jot of any of this … zero, and so using the exact same logic and the exact same evidence you can also assert that a magic pink unicorn, inter dimensional aliens, time travellers, etc… did it. When you can vary an answer like this then it tells you that there is something very wrong.

He then develops all this by attempting to suggest this …

In the case of the atheist, or the “freethinker,” as they paradoxically prefer, that which is unbelievable is that somehow everything came from nothing – that there is no uncaused first cause; that God does not exist, even as knowledge of His being is indelibly written on every human heart and proved by all He has made.

So do atheists “prefer” the idea that everything came from nothing?

The problem he faces with this line of argument is that atheism is just a  conclusion regarding one claim … is there a god? Nope, no evidence, and that is it. Cosmological origins reside outside that scope and so if he wises to discuss and actually understand such things then he really should debate it all with a cosmologist. If he really can’t cope with “I don’t know” and desperately needs a “uncaused first cause”, then he need look no further than the universe itself, there is no need to make stuff up and add a mythological god into the mix as an additional layer of rather pointless complexity. Apparently we are also advised that god is “indelibly written on every human heart” … and his evidence that this is actually true is (insert drum roll here), oh come now, you can guess … yes of course, exactly nothing at all (Hint: the bible is a claim, not “evidence”).

What then follows is a rather weird big bang description …

Then: bang! Everything. Nonexistence became existence. Nothing became, in less than an instant, our inconceivably vast and finely tuned universe governed by what mankind would later call – after we, too, popped into existence from nowhere, fully armed with conscious awareness and the ability to think, communicate and observe – “natural law” or “physics.”

To point out that he is totally clueless does not even begin to describe it, but perhaps it might be worth at least starting by pointing out that the Big Bang is actually a model that simply describes the rapid inflation of the early universe from a singularity and says absolutely nothing at all about the origins of that singularity, and so is not actually about the origin of everything from nothing.

However, it is even weirder than simply not understanding because he appears to be seriously claiming something quite different and is not actually describing the big bang as it is understood. Instead he appears to be claiming that everything just appeared exactly as it is, and that contrary to every single bit of observational data, we simply popped into existence as we are now. Why oh why am I not surprised to discover that he can quite happily reject the entire scientific endeavour and ops for “magic” being responsible for an instant-on universe as if some supernatural entity was brewing up a cup of instant soup.

He then  proceeds to quote from, and leans very heavily upon, a rather daft article written in the Wall Street Journal by Eric Metaxas, and quite happily ignores the rather robust rebuttal of that by Cosmologist Lawrence Krauss which was also in the Wall Street Journal. The observation that he will happily quote the former and hope that you don’t know about the latter is quite frankly grossly dishonest and very misleading, and tells you a great deal about his lack of any integrity.

So does he make a truly convincing argument that the big bang “blows atheism sky high”?

The TL;DR; answer is nope.

The slightly longer summary answer is that he believes specific things, so I get why he asserts all this, but beyond, “Well I have no idea how it could have happened naturally, therefore god” he has nothing, except a willingness to demonstrate his complete lack of imagination being combined with a contentment to settle for primitive mythology as ultimate truth.

Incidentally, if indeed the big bang was the very start of time itself, then exactly what does having a cause for that even mean, because that would imply a “before”. If the big bang was the start of time itself then claiming a “before” is about as meaningful as asking what is south of the south pole, but if you are opting for “magic” then I guess little flaws like that can be happily dismissed with more magic.

Bottom Line: Religion and science don’t work when combined, so you should put aside such myths and simply go with what the evidence tells us, then when faced with things you don’t understand or don’t know, settle for “I don’t know” as the best default instead of “magic”. The alternative leads to a place where you have so seriously skewed your grasp of things that your conclusions regarding what is and is not true would become seriously compromised.

“I think it’s much more interesting to live not knowing than to have answers which might be wrong. I have approximate answers and possible beliefs and different degrees of uncertainty about different things, but I am not absolutely sure of anything and there are many things I don’t know anything about, such as whether it means anything to ask why we’re here. I don’t have to know an answer. I don’t feel frightened not knowing things, by being lost in a mysterious universe without any purpose, which is the way it really is as far as I can tell.” – Richard Feynman