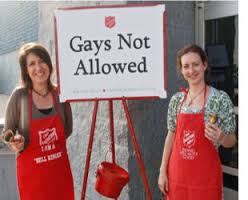 The Salvation Army is of course a group that embraces traditional Christian views, but we all know that. In fact, they have a rather good public image because their mission is to help the poor, destitute and hungry by meeting both their “physical and spiritual needs”. I’m not so sure about the “spiritual” bit, that is a word that does not actually describe anything that is real or measurable, but if you read between the lines then I guess it means “Help them to start believing in a god”. OK, so apart from the goal of encouraging people to enter into a relationship with an imaginary friend, they do also help is very very practical ways as well, and that is to be applauded.

Having been founded in 1865 by one-time Methodist minister William Booth they have, like many religious groups, become a bit stuck in the mindset that they inherited from their founder, and so the emphases here is upon the word “traditional”. This then leads us to what can best be described as a WTF moment, and concerns the fact that they openly oppose the LGBTQ lifestyle (well yes, paint me unsurprised by that)

But still, what happened went beyond what you might expect, and so here briefly is how things played out …

Now remember, this is their “Media Relations Director”, so he will help sort out the confusion and explain that they are in fact jolly nice chaps … er no, not exactly. This is what happened (link to actual interview is here) …

Ryan questioned Craibe about Salvation Story: Salvationist Handbook of Doctrine, the manual used to train Salvation Army “soldiers” and members. Several chapters refer to the sin of homosexuality, including a section that cites Romans 1:18-32, which includes a admonition that homosexuals “deserved to die”;

“ Ryan: According to the Salvation Army gay parents deserve death. How do you respond to that, as part of your doctrine?”

“Craibe: Well, that’s a part of our belief system.”

Ryan: So they should die.”

“Craibe: You know, we have an alignment to the Scriptures, but that’s our belief.”

Say what!!! … their Media Relations Director is suggesting that murdering people for being gay is just fine, and is part of their belief.

OK, lets be truly skeptical and give then a bit of room here …

After this disastrous bit of PR gone very wrong, they issued an apology …

Question: Do you feel you owe an apology or explanation to all those gay and Lesbian volunteers and people your organisation supports?
The Salvation Army sincerely apologises to all members of the GLBT community and to all our clients, employees, volunteers and those who are part of our faith communities for the offence caused by this miscommunication.

Do they mean it? Yes, I believe they do, and that is a good step forward.

So does that mean they have scrapped the offensive bits of the bible? Nope, what actually happens when faced with all such conflicts is that they reinterpret the meaning of the words. They now rationalize it as follows: “The author is arguing that no human being is without sin, all sin leads to spiritual death (separation from God), and all people therefore need a Saviour.”

This of course is how beliefs manage to thrive, they simply change the meaning of the words so that they align with the prevailing culture. Beliefs that cannot do this get discarded, fade and decline, but those that adapt to cultural changes thrive.  It has all been played out before. The bible is a pro-slavery book from cover to cover and so reflects the prevailing thinking of the age it was written in. In order to adapt to an age in which slavery is now recognised to be highly immoral, the slavery references are deemed to be a “spiritual” slavery (yep, that rather useful and completely meaningless word again) and not a literal endorsement of slavery.

That of course is the interesting thing about books such as the Bible and the Quran, they are vague enough to mean whatever you want them to mean, and can be used to justify or condemn almost anything at all.