So yes, finding a headline claiming “Militant Atheist converts” is perhaps click-bait, and yet I’m always curious to understand what makes people tick. The specific article in question comes from TheBlaze, and that fact alone should motivate you to question the accuracy of anything it says at all.

Well, let me put it this way, I’ll whisper just one name … Glenn Beck. The site is all part of his network and self-describes as an alternative to “mainstream media outlets” which they claim are “distorting facts to fit rigid agendas,”.

So what should we made of Glenn Beck? Well let me put it this way, the author Stephen King labelled him  “Satan’s mentally challenged younger brother“, and to give some credence to that observation, here are a couple of lists

… so remember, that this is the guy behind the website that is the source for this claim.

On to the story itself

The story is that a UK based author, Scott Coren, who once described himself as a “militant atheist” converted and became a Christian.

First point: I’ve never ever come across any atheist who would describe themselves as “militant”.That is a term that tends to be applied by religious people who don’t like criticism of their irrational beliefs, and so they label anybody who dares to deploy such criticism as “militant”.

Anyway, his conversation story is as follows …

Coren, a father of two, said his path diverted after his daughter was born in 2012 with a serious heart condition.

He began caring for her around the clock, spending a plethora of time in medical facilities and a hospice, where he observed some dynamics that changed his heart and mind.

When Coren saw the nurses, whom he described as “human angels,” caring for critically ill children, his views on God and the afterlife began to dramatically transform.

He found himself pondering death, in particular, thinking, ”It can’t be the end of things. It just doesn’t make sense.”

Where did he ever get the daft idea that things have to make sense?

The “reason” and “logic” he had once used to deny God’s existence were suddenly leading him toward a belief in something more profound.

And the reason and logic here is …. yep, none at all, there is no reason or logic, simply an emotional roller coaster ride.

Despite his best efforts to avoid becoming a Christian, Coren said that his reasoning faculties left him with no alternative option.

“no alternative” … really? Let’s see, he explains it as follows …

“The point of atheism as a belief is about logic and sense — and then you hit that juxtaposition,” he said. “If you’re using sense, then you can’t deny when something else makes sense as well.”

It is of course at best a deist argument, and not a very compelling one, yet even more amazingly the Christian god, the one that dominates the culture he was born into, turns out to have been just the right god and no doubt all the other alternative gods that are on offer are the wrong ones.

What this appears to be is that it is really a story of a chap who rather tragically has a very very ill daughter with a heart problem, and as he endured this emotional crises, he found comfort in the idea of embracing a belief. He goes on to explain exactly this as follows …

“My daughter was born with a heart problem. For two and a half years now I’ve been looking after her. She can’t be left alone for her for a second,” he explained. “My life is very much like a hermit. I’m awake all night, every single night. I’m living a very medicalized life.”

His daughter’s very serious condition means that she’s sometimes abruptly hospitalized and can go from being well to falling into a life-threatening condition in just a half hour’s time.

While some tend to blame God when loved ones experience illnesses, Coren has experienced quite the opposite, telling TheBlaze that his struggles have sparked an evangelical faith journey.

We can all empathise with him and all he has been through, but I do feel that I should add that embracing a religious fantasy is a path that offers nothing except false hope, it is a story about an emotional journey.

So here below is Scott with his daughter – I can only wish them well. 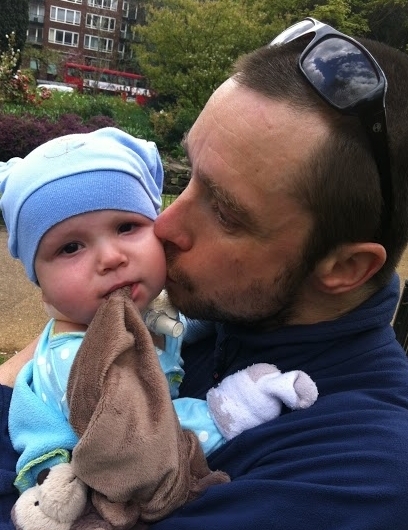 When it comes to beliefs, people come and go for a whole host of usually emotional and cultural reasons.

We are so easily fooled and befuddled, and this tendency for us to be like this is perhaps part of what makes us human, and yet none of this traffic between the various different beliefs that prevail today tells us anything at all about the things that are really true – for that you need solid independently verifiable evidence, and when it comes to all these god claims, including this one, the quantity of that on the table so far is exactly zero.