Reuters has a report about a group of 700 Pakistani lawyers in the Punjab who are vigorously promoting support for the concept of “Death for Blasphemy” and are part of a consortium whose mission is to ensure that those that are accused are then charged, tried, and execute … no exceptions.

A little-known alliance of hundreds of lawyers in Pakistan is behind the rise in prosecutions for blasphemy, a crime punishable by death that goes to the heart of an ideological clash between reformers and religious conservatives.

The group, whose name translates as The Movement for the Finality of the Prophethood, offers free legal advice to complainants and has packed courtrooms with representatives, a tactic critics say is designed to help it gain convictions.

The stated mission of the Khatm-e-Nubuwwat Lawyers’ Forum and its leader Ghulam Mustafa Chaudhry is uncompromising: to use its expertise and influence to ensure that anyone insulting Islam or the Prophet Mohammad is charged, tried and executed.

“Whoever does this (blasphemy), the punishment is only death. There is no alternative,” Chaudhry told supporters crammed into his small office behind the towering red-brick High Court building in the eastern city of Lahore.

Should I name and shame?

Of course, and so here is the guy behind all this. His name is Ghulam Mustafa Chaudhry and he leads the Khatm-e-Nubuwwat Lawyers’ Forum. 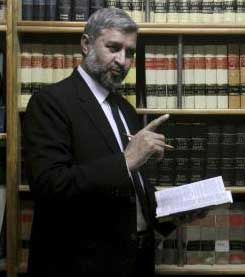 As you might guess, Mr Chaudhry was the defence lawyer for Mumtaz Qadri who was recently executed for murdering the governor of the Punjab, Salmaan Taseer, back in 2011. The defence was that the governor had dared to criticise the utterly absurd blasphemy laws, and so the murder was fully justified. He lost his case and Mr Qadri was executed a couple of weeks ago for that 2011 murder, but was then hailed by ten of thousands as a hero.

They have been busy

Since Khatm-e-Nubuwwat was founded 15 years ago, the number of criminal blasphemy cases filed in Punjab, the group’s home base and Pakistan’s most populous province, had tripled to 336 by 2014, according to police figures.

It fell to 210 in 2015 as stricter provincial rules were applied, but critics said the number was still too high.

Chaudhry told Reuters he had personally been involved in more than 50 criminal blasphemy cases, and said his group had grown to 700 lawyers in Punjab, where the majority of blasphemy cases are heard.

“If they hear of a complaint, the lawyers will come to the person and offer to take the case for free,” said a policeman, who asked not to be named to avoid reprisals.

“Sometimes they arrive with people and encourage them to make a complaint.”

Blasphemy, the “crime” with no victim

The very concept of Blasphemy is completely and utterly meaningless, and so what we really have here is a religious tool that is used to gag and silence any and all criticism of utterly absurd ideas.

Some might indeed passionately and deeply believe specific things, but when you find that even the very expression of doubt stirs up a blood lust to slaughter innocent people, then clearly vocal criticism of such ideas must be deployed.

There are several sections of Pakistan’s Criminal Code that together make up its blasphemy laws.

Not everybody is a complete religious lunatic in Pakistan, and so far the number of people actually executed by the state for Blasphemy has been zero, but many of those accused have been murdered by mobs of religious fanatics who simply ganged up and slaughtered people accused of blasphemy – that is not uncommon.