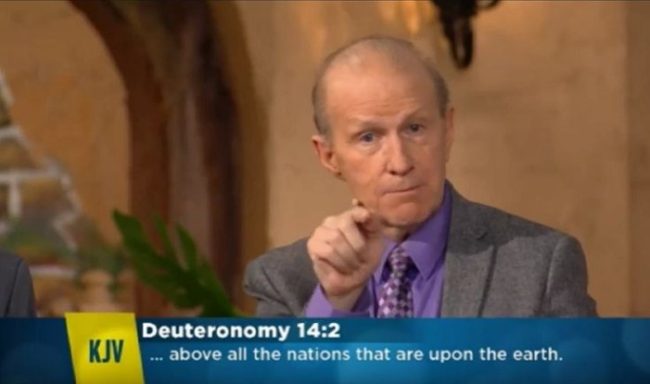 Whenever I think I’ve heard all the truly daft religious claims, up pops somebody who is quite determined to push the envelope out into new unchartered and quite bizarre crackpottery. It comes via a chap who appeared on the Jim Baker show, and given that Mr Baker is himself a few clowns short of a full-blown circus, it should come as no surprise to discover his guests are not exactly anchored within our reality, but appear instead to be residents of Narnia who have simply stopped by planet earth for a quick visit.

So here is a 2 minute clip (and yes, he is flogging a book about all this of course) …

OK, so lets translate that for you then. His “evidence” is that he has no clue how stonehenge was built, hence it just must have been done supernaturally by satanic giants.

For the princely sum of $65 yes you also can get access to his insane babbling, and the observation here is that he perhaps is indeed targeting the right audience, because anybody who is still tuning in to listen to Jim Baker will indeed be stupid enough to fork out $65 for this byzantine bullshit. As a quick reminder, Jim Baker is a well-known religious fraudster who was found guilty of eight counts of mail fraud, 15 counts of wire fraud and one count of conspiracy in 1988, and went to jail and then paroled in 1994. Today he is once again back in the business of using religion on TV to fleece the gullible.

It should of course be noted that he has since those old days learned his lesson and is a reformed man, he no longer peddles the old religious prosperity claims that got him into so much trouble, and is instead promoting brand new and even more absurd claims.

OK, enough about Baker, who is the crackpot seriously pushing a hypothesis that giants were once real because those stones are so huge only a giant could have done it?

It is none other than Dr. Dennis Lindsay.

Dr of what exactly? I dread to even try to contemplate that. Anyway, he runs a Bible college (CFNI) which is not accredited so basically the certificates they issue upon graduation are meaningless bits of paper, so no surprise there.  He is well-known within some evangelical circles because CFNI itself is well-known, but not because of anything he specifically did, his dad started it all, he simply inherited the setup. He is personally quite hot on creationism and uses exactly zero credible evidence to also assert other daft claims, for example that dinosaurs and humans co-existed on Earth. (Yes apparently in his fantasy world The Flintstones is deemed to be a documentary).

So why does he promote such absurd fiction like this?

Basically because it tickles the minds of those looking for something new and unique. Why settle for the old BS, when you can make up brand new BS that is basically a rehash of old myths, but done in a way that nobody has heard before, and thus stir up not only interest but donations. This is the modern snake-oil, and it thrives because many are willing to buy it.