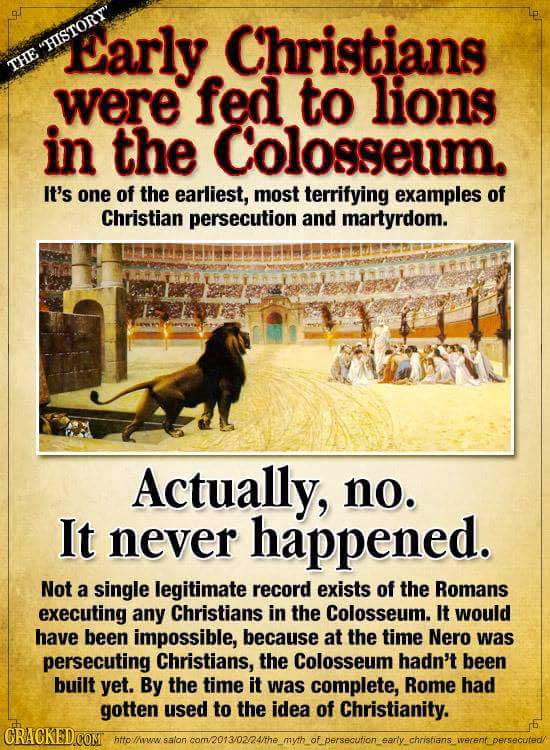 So the following popped up in my Facebook feed this morning, and it surprised me. 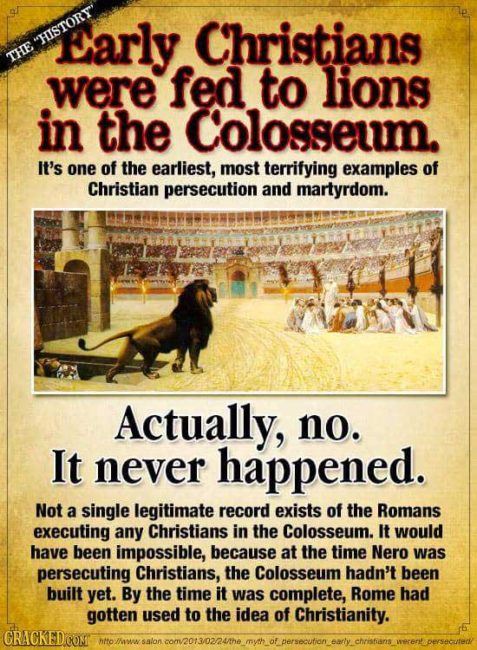 OK, so let’s dig into this and see if we can work out what is really true.

If you narrow the claim down to just the Colosseum, which is also referred to as the Flavian Amphitheatre, then it is true that it was not built until 80 CE, and that is after the demise of Nero who killed himself (or at least forced somebody to do it because he was unable to do it himself) in 68CE.

That however is far from the end of the matter, because Lions aside, Nero himself is well-known to have targeted Christians. Tacitus explains that after the great fire the population were looking for somebody to blame and Nero was an easy target. In order to address this threat, he blamed Christians and then ordered the deaths of vast numbers of them (Tacitus Annals XV.44.) …

But all human efforts, all the lavish gifts of the emperor, and the propitiations of the gods, did not banish the sinister belief that the conflagration was the result of an order. Consequently, to get rid of the report, Nero fastened the guilt and inflicted the most exquisite tortures on a class hated for their abominations, called Christians by the populace. Christus, from whom the name had its origin, suffered the extreme penalty during the reign of Tiberius at the hands of one of our procurators, Pontius Pilatus, and a most mischievous superstition, thus checked for the moment, again broke out not only in Judaea, the first source of the evil, but even in Rome, where all things hideous and shameful from every part of the world find their centre and become popular. Accordingly, an arrest was first made of all who pleaded guilty; then, upon their information, an immense multitude was convicted, not so much of the crime of firing the city, as of hatred against mankind. Mockery of every sort was added to their deaths. Covered with the skins of beasts, they were torn by dogs and perished, or were nailed to crosses, or were doomed to the flames and burnt, to serve as a nightly illumination, when daylight had expired. Nero offered his gardens for the spectacle, and was exhibiting a show in the circus, while he mingled with the people in the dress of a charioteer or stood aloft on a car. Hence, even for criminals who deserved extreme and exemplary punishment, there arose a feeling of compassion; for it was not, as it seemed, for the public good, but to glut one man’s cruelty, that they were being destroyed.

There is no doubt that such persecution really did happen and it is not simply a myth. We do however carry within our heads a repository of myths, some of which do have some basis in fact, but often things are a lot more complicated. (I might perhaps one day make a fortune selling T-Shirts with the Logo, “Its not as simple as that”). Take for example Nero; we all know that he was a complete shit … or was he?

Now this is where our simplistic views can indeed founder upon the discovery of just how complex he really was. When Nero heard about the Great fire, he rushed back to Rome and used his own money to get a relief effort going. In fact he went as far as personally taking part in the search and rescue of victims and did so for many days by himself without his bodyguards at his side. He then opened his palaces to provide shelter for the homeless and also arranged for food to be delivered to avert them starving. You can read about all this here – Tacitus, Annals XV.39.

I’m not suggesting that Nero was a paragon of virtue, he was still basically a complete shit, but he was also no cardboard character and instead was deeply complex, often manifesting both both utter brutality, ruthlessness, and yet also had streaks compassion. While in his life he was focused on diplomacy, trade and enhancing the cultural life of the Empire, we tend to think of him today in popular culture as an an unbalanced tyrant, which to some degree is perhaps true, but that modern popular perception is not the whole story – and so that is my point – often the myths we embrace hint at something far more complex and are simply pale shadows of that reality.

Did the Christians get tossed to the Lions in the Colosseum?

Well, there is no direct evidence that Damnatio ad bestias (Latin for “damnation to beasts”) was applied to Christians within the Colosseum itself.

We do know that Nero did attempt to blame Christians for the fire and had many killed by animals.

There was also a Christian writer named Tertullian in the 2nd century recording the observation that the Roman mob tended to blame Christians for any misfortune and cry out “Away with them to the lions!” if something bad happened, but he himself never witnessed this happening.

So back to the question, yes Christians were persecuted, that is wholly factual and such persecution continued until the 4th century. As for Lions in the Colosseum, well we have no direct evidence, but I find it quite probable given the utter brutality of the times, and the prevailing hostility towards what was generally perceived to be a “malicious superstition”.

To understand such popular hostility it should be remembered that it was generally thought that the duty of citizens is to pay homage to the official gods, and if something bad happened, then those who had failed in this public duty would be seen as the cause because they had failed in their public duty and thus displeased the gods.

In other words, believing things that are not actually true at all does have consequences, not just then but also now. It is such irrational thinking that not only then led to innocent people suffering Damnatio ad bestias, but even today inspires deeply fanatical Islamist factions.

Sometimes things worked out differently in the arena

There is one account recorded within the biography of Emperor Gallienus (in the Augustan History).

A merchant was caught selling glass beads to the emperors wife instead of gems and so was hauled up in front of the emperor who rapidly sentenced the con man to Damnatio ad bestias. On the day as he awaits his fate, a capon (basically a chicken) is led into the arena instead of a lion. The emperor’s herald then proclaimed “he has forged, and was treated the same”, and was then let go.

The account does not go into such details, but I suspect this merchant needed to buy new underwear.