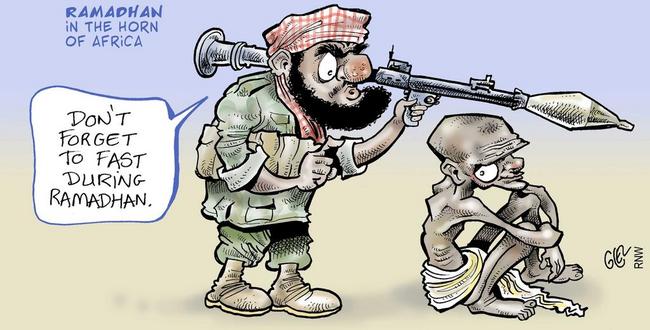 Ramadan, is the month during which Muslims fast from sunrise until sunset, and so once it is dark, they can stuff themselves silly. Well OK, not quite everybody, there are some exceptions, for example for those travelling, those with a severe illness, are pregnant, or are breast-feeding. Every day, prior to dawn those taking part have a meal, then fast while the sun is up, and the moment the sun goes down down have another meal.

From the viewpoint of those that believe it is a way to get extra bonus points from Allah, but the truth is that it is basically a form of conditioning that helps to keep the believers devoted. It has been like this since the very beginning of Islam when it became a mandatory practise during the second year after the Muslims migrated from Mecca to Medina.

Is it just one sect?

Nope, it is quite universal, but of course there are cultural variations and a mix of traditions. The reason for such a universal practise is that the Quran says so …

The month of Ramadan in which was revealed the Qur’an, a guidance for mankind, and clear proofs of the guidance, and the Criterion (of right and wrong). And whosoever of you is present, let him fast the month, and whosoever of you is sick or on a journey, (let him fast the same) number of other days. Allah desireth for you ease; He desireth not hardship for you; and (He desireth) that ye should complete the period, and that ye should magnify Allah for having guided you, and that peradventure ye may be thankful. – Pickthall 2:185

In other words, even if you are a Quranist and discard every single Hadith, you still do not escape, because doing so would be haram.

It is not just an idea, it is also the Law

Within some countries it is not simply a religious belief, it is embedded within the legal code, and so if you do not do it then there are consequences – as explained on the Wikipedia page …

in Algeria, in October 2008 the court of Biskra condemned six people to four years in prison and heavy fines.[47]

In Kuwait, according to law number 44 of 1968 the penalty is a fine of no more than 100 Kuwaiti dinars, or jail for no more than one month, or both penalties, for those seen eating, drinking or smoking during Ramadan daytime.[48][49]

In the U.A.E., eating or drinking during the daytime of Ramadan is considered a minor offence and would be punished by up to 240 hours of community service.[50]

In Egypt, alcohol sales are banned during Ramadan.[51]

Some countries have laws that amend work schedules in Ramadan. Under U.A.E. labor law, the maximum working hours are to be 6 hours per day and 36 hours per week. Qatar, Oman, Bahrain and Kuwait have similar laws.[52]

What can one say, except to observe that “peaceful” Islam is being its usual intolerant self by enforcing religious belief upon all and not just making it a free choice for those that want to follow.

Allah really did make a bit of a hash of this

Now this is where we need to point out the rather obvious. Allah clearly is a rather ignorant god who does not appear to have appreciated that the earth was round, and that closer to the poles the entire idea of a sun-centric fast from sunrise to sunset simply does not work.

If you are Muslim and happen to live in the north of Norway or northern Alaska, then you are more or less stuffed (or in fact not, because you can’t eat) because the sun never actually sets, and so you are faced with the prospect of not eating for the entire 30 days. Jump to the other side of the planet, and all is fine because there the sun never rises and so you never actually need to stop eating at all, which makes a complete mockery of the idea of this being a month of fasting.

So what do Muslims do who live that far north, or for that matter far enough north to only see a couple of hours darkness at most?

Well, since the entire idea is not actually the word of a god, but is simply a made-up idea, then you can solve this problem by making up more stuff such as finding a friendly Imam to declare that some vague Hadith means that you really need to be adhering to sunrise and sunset in Mecca and not local time. The great thing about having a vast rich collection of religious scribblings full of conflicting ideas to fall back upon is that you can always find something that is vague enough to be interpreted in whatever way you need it to be.

Making stuff up means that you will of course hit problems when reality comes calling, so to solve that, just make yet more stuff up … it’s as easy as this.

Of course, you can make things even more interesting (entertaining) by asking questions such as …

Once you get to that stage it might perhaps be time to come to terms with the fact that 7th century middle eastern customs that work on the equator where you have an even split between night and day, don’t work at the poles or anywhere else. It might of course be a surprise or a shock to discover that an all-knowing supernatural entity did not know this – and rightly so because this is a rather clear sign that Allah is not actually real at all and does not exist.

It might then be tempting for those that believe to suggest that saying that there is no Allah is simply Shaytan whispering, so it may perhaps be worth pointing out that having an imaginary friend is bad enough, to then add to that the concept of an imaginary enemy causes one to simply face-palm, but that of course is why it all works so well, it is part of the subtle psychology of fear that help to keep people trapped and ensnared.