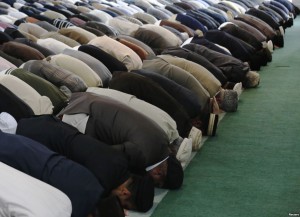 The Islamc month of Ramadan has started. This is a period when Muslims fast and pray for an entire month.

OK, first lets clear up a few items, here is a very brief list of things that sometimes confuse non-Muslims:

Now, on to some not so well known specifics.

There is no agreement on when Ramadan actually starts

The Middle east usually starts at the same time, but often other regions such as Pakistan don’t.

The problem is that Ramadan, like any other lunar month, begins the day after the first sighting of the sliver-thin new crescent moon. But everybody does not live in the same place on the planet (gasp, what a surprise) and so the orbit of the moon around the earth is such that it can take up to three days for the whole world to actually see the crescent for the first time each month – hence the confusion.

You also need to contend with the fact that Islam is a vast diversity of often conflicting beliefs, so while some may be content to do the maths and work it out, others might insist that until there has been a naked eye sighting, it has not started yet.

If you are an Eskimo and a Muslim, you are more or less buggered

You only fast while the sun is up and that is fine, except if you happen to live in a region on the planet that will never see the sun set at this time of year.

There are two approaches to this:

Clearly not. The prevailing view of the world as describes in the Quran is flat-earth; the concept of a sphere in which the moon hits a new phase on different days was unknown to the 7th century authors, and the realization that the closer you get to the poles the longer the day – also unknown to authors living in the Arabian desert located quite far from the poles.

Some might say to me “You should respect the traditions and culture of others, so why all this criticism?” To be honest, I have no problem with the fasting, or even the crazy beliefs, my problem is that the belief gives birth to intolerance, homophobia, violence and murder. Casting doubt upon the belief might also cause those that dispense intolerance to begin to question such a stance. The point is simple, the Quran was clearly not authored by a supernatural entity, it is instead a book that reflects the thinking of its time – but now we need to move on and leave it, and all the intolerance and division that it brings, behind.