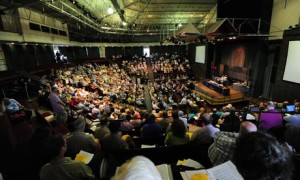 I must admit that Giles Fraser has a rather good gift for calling things out as they are. He describes his time at the general Synod as follows …

Dante’s vision of hell was colourful, of course. But for the real deal, look no further than the General Synod of the Church of England. I sat on the thing for several years – though I never said a word in debate. There didn’t seem any point. Nobody ever changes their mind.

(Insert sound of jaw dropping here) … remember now, this is no outsider, he is an ordained priest, and this is no private conversation, he just published this in the national press.

He continues on and paints a picture of a shit infested baking hot theatre for them to meet in (OK, he used the word poo and not shit), and as for those that attend, he clearly loves them all …

Body odour can be a bit of an issue too. Lots of people don’t really like each other, but, being Christians, have to pretend that they do. It is a golden rule that when two or three Anglicans gather together, there is an extravagant display of competitive niceness.

I know exactly what he means, on my own way to non-belief, I passed through Anglican doors and encountered exactly this.

Round and round we go. Endlessly trying to keep everyone on board and yet also trying to follow the man who said that he came not to bring peace but to bring a sword and set “a man against his father, a daughter against her mother” (Matthew 10, 34-35). It is true that religion is often the source of conflict and violence in the world. It is to the credit of the Church of England that no one could ever be reasonably afraid of it. In reaction against its own violent past, emerging from the religious conflict of the 16th and 17th centuries, it has styled itself as a church of conflict avoidance and reconciliation. Except that it cannot reconcile even itself

I have a rather strong feeling that they will not be making him a Bishop any time soon, but then I guess he need not worry too much when faced with “an extravagant display of competitive niceness“.

He finishes off with …

Its not a fracking endurance test, you could just walk away from it all and never look back.

1 thought on “Giles Fraser equates the C of E Synod to hell … and by the sound of it, with good reason.”