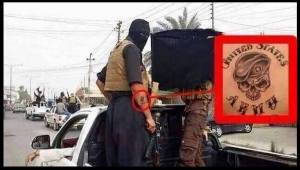 The above picture is doing the rounds. If in fact you google the image, you will discover that it is all over the place as “evidence” that ISIS are really being run secretly by the US army.

As an example, here is a posting of the above on Facebook, that comes with the following text …

This ASTONISHING PICTURE has just been tweeted by British MP George Galloway; it’s astonishing because it exposes US troops posing as ISIS TERRORISTS…So there are obviously factions within the US military and government who are engaged in terrorism; it’s not difficult to see now how easily ISIS will enter into America; especially if there are those within her own military and government willing to facilitate the terror!!!

One slight flaw … it’s fake, the claim being make is completely fraudulent, oh and also the claim that Mr Galloway tweeted it is also fraudulent, I checked his twitter feed and it is not there. That is also not a surprise, he tends to say very little about ISIS and mainly focuses on support for Palestinians.

When I first saw this I immediately suspected that this was a fake, because it is a rather common pattern, so to look into it, I simply googled the above image, and then  proceeded to look for the oldest variations. Sure enough, I eventually found the original one. It’s a reuters image and can be found here … 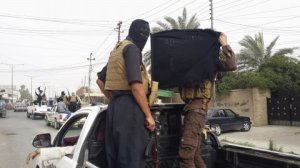 Oh look … no tattoo, and to be honest that is a surprise, it’s what I suspected.

There exists such desperation and denial that Islam will openly manifest itself as a gang of murderous intolerant thugs when embraced literally. It creates a burning need to manufacture fraudulent evidence so that it can then be claimed that ISIS are really the US army under the covers and not “true” Muslims at all.

Sadly the picture has been shared many many times and so the belief that ISIS is really the US army has rapidly spread, and many will now be thinking, “I’ve seen evidence”.

How well received is the news that this is fake?

Not well at all by some.

So what happens after clear evidence that that is fraudulent is produced? Well, I invited him to comment …

Mohammed Mobin I’m willing to believe that you were conned like rather a lot of others and that posting this was simply an honest mistake. Please prove me right and demonstrate that you do have some integrity and a willingness to stick to the evidence.

He responded as follows with verification that is far happier being a complete looney and that he has no interest in facts, just his specific agenda …

I suspect you can grasp the thought without too much encouragement that this is not a nice guy.

And that folks is the challenge here – there is a seething morass of hatred simmering away under the surface that is very easily stoked up and triggered with fraudulent PR, and once set loose, it is then very very difficult to reign it back in with facts.

It appears to be explained by a part of human psychology that is known as the “debriefing paradigm”- when presented with an fake idea as factual, and then told later that it is fake, the new information tends not to trump the initial emotional leap and the original tends to stick.

What is perhaps at the root of all this is that individuals who truly believe and have invested a considerable quantity of time and emotions in Islam find it quite challenging to come to terms with ISIS being a manifestation of Islam, so it becomes vitally important to retain their belief by holding tightly to the idea that ISIS is not really Islamic at all but is instead some US / Zionist / CIA plot, and so this enables the belief to be retained as valid.

Can we square the circle?

A better approach is to gently encourage the thought that the word Islam is in reality an umbrella that shelters a vast diversity of conflicting thoughts, some of which is intolerant and some of which is not.

It is very difficult for individuals to simply let go of irrational beliefs in one big leap, they need to be able to take small steps if they are to ever escape, and so being able to square the circle with a realisation that one variation of belief being violent and intolerant need not imply that this should or could be a universal trait is important. This is because it then opens up an escape route, one where you can retain the belief, and at the same time let go of the violent and intolerant variations.