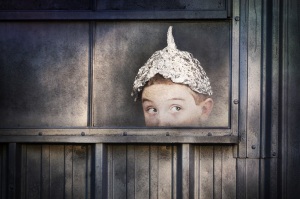 Trying to grasp why specific ideas that are complete and utter bullshit are embraced as truth is always an interesting question to ponder over, in fact I was doing exactly that a few days ago, so when I came across an article by Mehdi Hasan (a Muslim) it caught my eye. Mr Hasan, is one of those chaps who at times can come out with rather sensible stuff (for example his support for secularism), and also at the same time say some truly weird and daft things (such as his assertion that Atheists are like cattle), so it was interesting to see what somebody who truly believes (FYI, he is a Shia Muslim) would have to say about such thinking.

It starts off well, he does indeed recognise that there is a very serious detachment from reality …

Did you know that Abu Bakr al-Baghdadi, the leader of Isis, was trained by Mossad and the CIA? Were you aware that his real name isn’t Ibrahim Awwad Ibrahim Ali al-Badri al-Samarrai but Simon Elliot? Or that he’s a Jewish actor who was recruited by the Israelis to play the part of the world’s most wanted terrorist?

If the messages in my email in-box and my Twitter timeline and on my Facebook page are anything to go by, plenty of Muslims are not only willing to believe this nonsensical drivel but are super-keen to share it with their friends. The bizarre claim that NSA documents released by Edward Snowden “prove” the US and Israel are behind al-Baghdadi’s actions has gone viral.

There’s only one problem. “It’s utter BS,” Glenn Greenwald, the investigative journalist who helped break the NSA story, told me. “Snowden never said anything like that and no [NSA] documents suggest it.” Snowden’s lawyer, Ben Wizner, has called the story a hoax.

But millions of Muslims across the globe have a soft spot for such hoaxes.

Well yes, I’ve seen rather a lot of similar stuff myself and my reaction has been exactly the same … it’s all BS.

Now here is a very scary observation he makes regarding the scope of such ideas, they are truly very very popular …

A Pew poll in 2011, a decade after 9/11, found that a majority of respondents in countries such as Egypt, Jordan and Lebanon refused to believe that the attacks were carried out by Arab members of al-Qaeda. “There is no Muslim public in which even 30 per cent accept that Arabs conducted the attacks,” the Pew researchers noted.

This blindness isn’t peculiar to the Arab world or the Middle East. Consider Pakistan, home to many of the world’s weirdest and wackiest conspiracy theories. Some Pakistanis say the schoolgirl Malala Yousafzai is a CIA agent. Others think that the heavy floods of 2010, which killed 2,000 Pakistanis, were caused by secret US military technology. And two out of three don’t believe Osama Bin Laden was killed by US navy Seals on Pakistani soil on 2 May 2011.

Consider also Nigeria, where there was a polio outbreak in 2003 after local people boycotted the vaccine, claiming it was a western plot to infect Muslims with HIV. Then there is Indonesia, the world’s most populous Muslim-majority country, where leading politicians and journalists blamed the 2002 Bali bombings on US agents.

Why are so many of my fellow Muslims so gullible and so quick to believe bonkers conspiracy theories?

And that last line there, the question he is pondering over, is the key one to ask. It’s fine to rant about this utter insanity, but it is far more important to not just vent in frustration about such stupidity, but instead to consider what drives and motivates such thinking, so I applaud him for doing exactly this.

I should also perhaps add the observation that the human capacity for embracing conspiracy theories is not specifically an Islamic thing, but rather is universal. However, what is of concern here is the scale of it all – so what thoughts does Mr Hasan offer to explain it?

He makes some good observations.

There is a history of actual conspiracies …

Muslim-majority nations have been on the receiving end of various actual conspiracies. France and Britain did secretly conspire to carve up the Middle East between them with the Sykes-Picot Agreement of 1916. They also conspired to attack Egypt, with Israel’s help, and thereby provoked the Suez crisis of 1956.

A stream of lies is common …

I once asked the Pakistani politician Imran Khan why his fellow citizens were so keen on conspiracy theories. “They’re lied to all the time by their leaders,” he replied. “If a society is used to listening to lies all the time.. everything becomes a conspiracy.”

As the former Pakistani diplomat Husain Haqqani has admitted, “the contemporary Muslim fascination for conspiracy theories” is a convenient way of “explaining the powerlessness of a community that was at one time the world’s economic, scientific, political and military leader”

Avoidance of any responsibility …

As the Egyptian intellectual Abd al-Munim Said once observed, “The biggest problem with conspiracy theories is that they keep us not only from the truth, but also from confronting our faults and problems.”

It is of course tempting to identify one simple root cause (pick your favourite from the above), but things are never that simple, and often the degree of complexity and psychology at play is truly vast.

I do however have two additional observations to add.

The first is that Mr Hasan has missed one additional motivation for the embrace of crazy ideas, but as a believer that is perhaps understandable. To be specific – how can anyone with an unwavering belief in jinn, the moon splitting in two, magical flying horses, and an unseen supernatural power that writes books and sends down messengers possibly ever believe in conspiracy theories? In other words, if your entire life is built upon a complete fantasy, then that will perhaps seriously scupper your ability to think critically and work out what is and is not real.

Secondly, there is a feedback loop in play here. The promotion of wild conspiracy beliefs makes those that do this look like complete loons. That in turn creates an even greater degree of insecurity when this is pointed out to them.