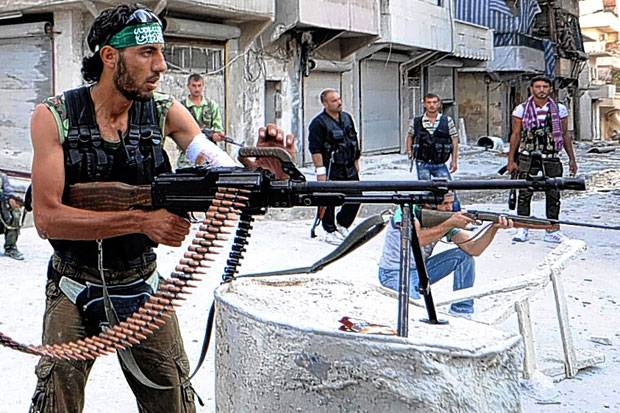 Jihad is a double edged sword, and this is not just in the sense that the word has two generally accepted meanings, the first being an inner struggle, and the second being an external armed violent struggle against the enemies of Islam, but also in one other sense as well.

Those who promote the second variation quickly discover that doing so will result in others targeting them in return as the enemy of somebody else’s Jihad.

Well here is an interesting turn of events, reuters reported on March 7 that …

Saudi Arabia has formally designated the Muslim Brotherhood as a terrorist organization, in a move that could increase pressure on Qatar whose backing for the group has sparked a row with fellow Gulf monarchies.

The U.S.-allied kingdom has also designated as terrorist the Nusra Front and the Islamic State in Iraq and the Levant, whose fighters are battling Syrian President Bashar al-Assad, the Interior Ministry said in a statement published by state media.

The key issue is this – there is no such thing as “true” Islam. Instead there are simply lots of distinctly different variations, many of which regard the other variations as heretics, hence are all potential targets a Jihad (the external violent armed struggle variation)

The Saudi’s know this and quite rightly fear the Sunni Muslim Brotherhood because they know that their beliefs challenge the Saudi principle of dynastic rule, and also know that they have also tried to build support inside the kingdom since the Arab Spring revolutions, and so now those who would or could potentially be their Muslim brothers have turned against them and cast them out. The Saudi purge is not simply to denounce them, but also has a wider consensus, it not only consists of an internal purge and a denouncement, but also includes other states such as the United Arab Emirates (UAE) and Bahrain …

In an unprecedented move, Saudi Arabia, the United Arab Emirates (UAE) and Bahrain recalled their ambassadors from Qatar on Wednesday, saying Doha had failed to abide by an accord not to interfere in each others’ internal affairs.

Saudi Arabia and the UAE are fuming over Qatar’s support for the Muslim Brotherhood, and resent the way Doha has sheltered influential cleric Yusuf Qaradawi, a critic of the Saudi authorities, and given him regular airtime on its pan-Arab satellite channel Al Jazeera.

The Interior Ministry said on Friday the royal decree would apply to both Saudis and foreign residents who joined, endorsed or gave moral or material aid to groups it classifies as terrorist or extremist, whether inside or outside the country.

The statement also said “those who insult other countries and their leaders” or “attended conferences or gatherings inside and outside (the country) that aim to target the security and stability and spread sedition in the society”, would be punished by law.

This is not progress, but instead sets the stage for even more violence.

Because there is consensus amongst Islamic scholars that the concept of jihad will always include an armed struggle, then as a result of this thinking, we have a recipe for persistent on-going instability, and until there is a consensus that Jihad as an armed violent struggle is a bad idea and should only ever be seen as just an internal struggle, then nothing will really change, and millions will suffer the consequences.

The real showstopper is that this bad idea is a religious idea and so resides within a part of the culture that is deemed beyond criticism and hence cannot be challenged. Any who do actually challenge the idea vocally and openly end up being deemed heretics and become potential targets themselves.

The promotion of violence has consequences …