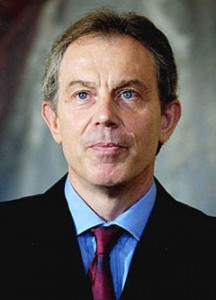 These days it is politically correct in some quarters to not criticise beliefs, perhaps because doing so it too close to racist xenophobia. It is of course true that extreme right wing groups such as the EDL (English Defence League in the UK) tap into the fear instilled within the minds of many by events such as Woolwich. Sometimes however the outrage is so obnoxious and repellent, and its cause so transparent, that the elephant in the room can no longer be ignored.

The Mail on Sunday published an Article yesterday by Tony Blair. He clearly nails his colours to the mast when he writes …

There is only one view of the murder of Lee Rigby: horrific. But there are two views of its significance.

One is that it is the act of crazy people, motivated in this case by a perverted idea about Islam, but of no broader significance.

The other view is that this act was indeed horrible; and that the ideology which inspired it is profound and dangerous.

I am of this latter view.

He then proceeds to lay out the political reality within the middle east and beyond by taking the reader on a brief tour of what is going on out there. This is no armchair traveller, as I’m sure you are aware, he is deeply embedded within the peace process himself and is about to embark upon his 100th visit to the Middle East since stepping down from the role of PM. He nails it in one when he writes …

There is not a problem with Muslims in general. Most in Britain will be horrified at Lee Rigby’s murder.

But there is a problem within Islam – from the adherents of an ideology that is a strain within Islam. And we have to put it on the table and be honest about it.

Of course there are Christian extremists and Jewish, Buddhist and Hindu ones. But I am afraid this strain is not the province of a few extremists. It has at its heart a view about religion and about the interaction between religion and politics that is not compatible with pluralistic, liberal, open-minded societies.

At the extreme end of the spectrum are terrorists, but the world view goes deeper and wider than it is comfortable for us to admit. So by and large we don’t admit it. This has two effects. First, those with that view think we are weak and that gives them strength.

Second, those within Islam – and the good news is there are many – who actually know this problem exists and want to do something about it, lose heart. All over the Middle East and beyond there is a struggle being played out.

On the one side, there are Islamists who have this exclusivist and reactionary world view. They are a significant minority, loud and well organised. On the other are the modern-minded, those who hated the old oppression by corrupt dictators and who hate the new oppression by religious fanatics. They are potentially the majority, but unfortunately they are badly organised.

Indeed yes, we need never look too far to see examples of this. Egypt illustrates it very well, for there we can see that a secular revolution has been successfully hijacked by a Muslim Brotherhood power grab. As a result, Egypt now faces complete disaster because the MB are incapable of working together with others and so they have been unable to address the basic economic problems and are rapidly spiralling Egypt down to a complete collapse of their economy, an event that will bring even more strive and social upheaval when it comes to fruition in the not too distant future.

I may not agree with Mr Blair on many things, but on this I do agree, and et we should also remember that this is the same chap who took us to war in Iraq. Has he learned anything from that experience? I think he has …

Not every engagement need be military; or where military, involve troops. But disengaging from this struggle won’t bring us peace.
Neither will security alone. We resisted revolutionary communism by being resolute on security; but we defeated it by a better idea: Freedom. We can do the same with this.

I note in the comments that many blame him personally, and are writing things such as “If we hadn’t gone in to Iraq these men would never have gravitated towards extremism,“. Tempting as it might be to buy into that idea for anti-Blair political reasons, I’m afraid it is not factually correct. Islamic terrorism has been around for a very long time, it pre-dates the existence of the US, even Jefferson and Washington had the deal with it [The Barbary Pirates war between 1776 and 1815].

Bad ideas are just that … bad ideas, and while most Muslims do not fully embrace many of the bad ideas, a fair number do and so we see that manifesting itself as intolerance, misogyny  violence and murder within many Islamic cultures. The very best way to counter bad ideas is not with violence or military action, but rather with better ideas, and also a good dose of satire and mockery for the bad ideas.

Additionally, lets be fully transparent about something else, there is no such thing as “true” Islam, it is an umbrella that shelters a considerable degree of very diverse thinking, some of which abhors violence and some of which embraces it with relish. Being a Muslim is not to be mocked, derided or frowned upon; instead it is the embrace of the bad ideas that merits the deployment of better ideas such as secularism, humanism, and the recognition that ‘beliefs’ are not viable reasons to ignore basic human rights such as freedom of thought and freedom of speech.