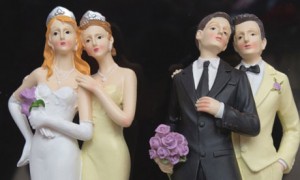 The debate on the proposed Gay Marriage bill in the UK has reached the House of Lords, and as might be expected, the unelected Bishops have a few thoughts on it all. Side note, yes we have people who are part of our law-making process on the sole basis that they have an imaginary friend that they think is real – nobody voted them in, nobody really wants them there, but by tradition for historical reasons there they sit.

With the gay marriage bill now up for debate, having it there in a room with some religious folks is akin to perhaps waving a red rag at a bull – you know that it will indeed garner some attention. Sure enough, Justin Welby, the current Archbishop of Canterbury who comes from the evangelical camp, had a few words of opposition against it. So what compelling logic does he have to motivate his peers to vote against equality?

“it is not, at heart, a faith issue; it is about the general social good.” – Justin Welby

So the religious guy is claiming that the opposition to it is not faith based, and yet the weird thing is that the bulk of the opposition comes from religious people for what are essentially religious reasons. I find that to be not only a grossly dishonest claim to make, but also a huge disconnect from the reality of the debate because it is almost exclusively the religious people who are choking on the very idea, I’ve yet to find a secularist or humanist arguing against it.

What is also interesting here, as observed by Damian Thompson in the Telegraph, is the following comment on this stance …

there is no theological core to its opposition? I thought the Church of England opposed gay marriage because it believed that it was against God’s plan for humanity. Now we discover that it is “not, at heart, a faith issue”. And so a very significant gulf opens up between the Church of England and the Catholic Church, which – like it or not – most certainly does believe that this is fundamentally, even exclusively, “a faith issue”.

So anyway, his claim on the table here is that opposing gay marriage is about social good. Does he have a point, is he making a credible argument that has some substance to it? I’m sure you can guess the answer to that, and while it might indeed be an answer that is obvious, it has apparently eluded him to such a degree that he is promoting this claim, but then this is what happens when you start with a conclusion and work backwards looking for reasons to justify it.

So what has he been saying …

OK, so if we follow this line of reasoning then we can only conclude that couples that can’t have, or fail to have kids should not be permitted to marry. Perhaps I have the wrong end of the stick here and he is instead claiming that permitting those that don’t have kids to marry means that those that do will now be motivated to make other non-marriage arrangements for raising kids   … are you with him on this, because I don’t think I am no matter how I slice or dice this thinking. He then goes on to say …

The family in its normal sense predating the state and as our base community of society is weakened.

Weakened … in what way exactly? Telling two human beings who love each other and wish to live together as a family unit, and perhaps also raise kids by adoption, that they cannot do so and will not be entitled to the same rights that the rest of us have on the sole basis that their sexual orientation is different, is not a compelling argument.

Are there really any valid arguments against gay Marriage?

The short answer is “no”. There are of course claims such as …

It is not natural and not found in nature … except of course when it regularly is.

Slippery slope; “next we will have people and animals getting married” … er, no we won’t, marriage is about consent, and where there is no consent then there is no marriage.

… and that is about it, oh except for “the bible says so”, but then that is a book that bans the eating of shellfish and touts slavery as a jolly good idea, which is all stuff that we can now happily discard as bullshit, so one can only wonder why the anti-gay clause is still deemed special.

So why does it really matter?

I honestly cannot find any compelling arguments, but when you consider what is going on, then I guess it becomes clear that the real foundation to the opposition is a mix of fear and a dislike of it all. I get it, the thought of a gay relationship invokes a ugh! reaction in some, but so what. Some people don’t for example like Marmite, the very thought of it causes them to almost throw up. Should they then be permitted to ban Marmite and forbid its consumption universally? No, it sits on the shelf in the supermarket so that those that wish to do so can purchase it, and those that do not can ignore it – it really is that simple.

The choice is simple, you can be opposed to a rather basic human right … equality … or you can be a decent human being and extend the concept to all regardless of sexual orientation.