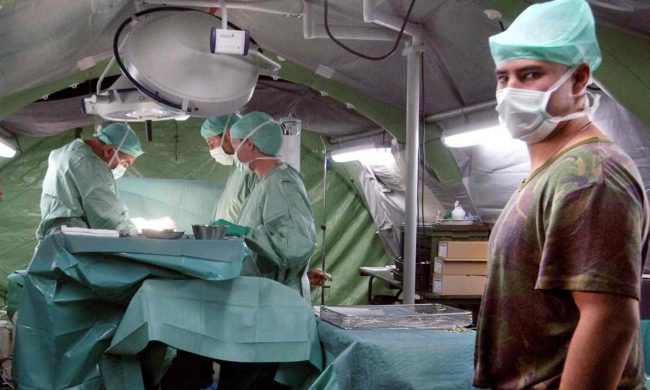 The Guardian recounts the firsthand story written by a Muslim doctor about what happened when he treated a non-Muslim, and how it resulted in him completely changing his entire life and fleeing Pakistan.

…one night while working an ER shift, when I received a patient needing urgent dialysis. Unattended and disheveled as he was, there was no one with him to get him the medicine he needed. Fearing he might die, I instinctually grabbed the emergency medicine donated via zakaat, an Islamic system of alms-giving, and performed the life-saving hemodialysis.

He survived but I immediately faced the wrath of the nurse. She was mad at me because the patient was a Christian and she said Islamic alms are not meant to be used on non-Muslims. But I did not know the patient’s faith, nor did I know that such a law existed.

I promptly replaced the medicine, which cost around $20. But it didn’t end there. The representative of a conservative Islamic NGO, which was a donor to the clinic, was furious about what I had done. They attributed my lack of knowledge about the alms laws to the fact that I belong to a minority Muslim sect.

A departmental inquiry followed and I was discriminated throughout the entire process. The workplace discrimination gave way to threatening phone calls and vandalism of my car and bike. They found out my family lived in America and that I was alone. This made me an easy target. I was threatened with death at a medical conference hosted by the chair of the same NGO which had complained about me.

Fearing for our lives, my wife, who is also a doctor, and I made it to the US in 2015. We applied for political asylum based on what had happened to us. It took a lot of courage on her part to leave. She had to accept not knowing when she could next visit her family in Pakistan, owing to our asylum status.

Do Muslims really discriminate against other Muslims like this in Pakistan?

Yes, sadly they do. In addition to the normal Sunni vs Shia violence and intolerance that has been raging since the initial emergence of the belief over 1400 years ago, we also have specific laws in Pakistan that are designed to promote intolerance and openly discriminate against any member of the Ahmadiyya Muslim community – in one word, ugh!

Is it really true that Islamic charity is strictly only for Muslims?

Once again, yes, this is generally correct. It comes as rather a surprise to many to discover that “charitable” efforts within an Islamic context are very rigidly discriminatory in nature.

Altruism is part of our human nature and so many beliefs practise the concept of encouraging those within the community to contribute to a fund that can then be utilised to help others, usually without discrimination.  Religious belief has no monopoly on this and so today in a secular context there are secular charities such as Doctors Without Borders or Amnesty International that enable us to manifest our human altruism and willingness to help those in need without recourse to a belief.

So what what is this Islamic charity?

Well it turns out that it is culturally something a bit different than our normal charity concept.

It is a generally accepted Islamic concept that roughly about 2.5% of your income must be given. This is known as Zakat. The divergence of thinking on it is that for some this is mandatory and for others it is voluntary. It is also seen as a tax and also as a way to purify your income. The source for all of this is the Quran itself and because it is mentioned there (in 7:156, 19:31, 19:55, 21:73, 23:4, 27:3, 30:39, 31:4 and 41:7). Net effect, since it is in the Quran then this is not negotiable, and so has led to it being collected by force by some. Today it is legally mandatory in Libya, Malaysia, Pakistan, Saudi Arabia, Sudan, and Yemen, and so not paying is on par with not paying income tax. This income is strictly seen as something that should only ever be used to benefit Muslims and the Muslim community. One other thought, as you might expect, there has been, and still is, rather a lot of financial abuse going on.

In summary, this “charity” is not really charity if it is mandatory, and while it may only be used for the benefit of other Muslims, it is also only collected from Muslims.

You might think this might simply be a slur designed to tarnish the belief, but it is a easily verifiable and quite frankly morally dubious fact …

Does it really work out like that in reality?

Clearly yes it does as can be seen within the story related by the doctor Beyond that one example we also have the observation of what actually happened within Pakistan during the floods in 2010 where many Christian survivors were denied aid supplied by Muslim charities unless they converted.

The Muslim doctor in question who had no interest in knowing the specific belief of his patient and just treated them anyway has fled to the US and so no longer practises medicine in a nation that desperately needs people like him.

Key Point: Yes he was and is Muslim, but he is also a decent human being, so while the belief does contain bad ideas (as do most beliefs), that need not ever become justification for discrimination. Criticism of an idea is fine, beliefs do not have rights … but people do have rights and so criticism of an idea such as Islam should never become discrimination against random individuals who embrace specific beliefs. Also remember that often belief is complex in that we tend to pick the bits we like and are nice and happily discard the not so nice bits.

The tide in even the US is turning against our Doctor …

Life here as an asylum applicant is hard, as I can’t practice medicine. I have a small, part-time job and study the rest of the time. I am working towards obtaining a license to practice medicine here. All this while, I am also deeply troubled by the discrimination of Muslims in America. I personally feel this country is abandoning the very principles its based on.

The demagogues emerging in this election campaign make me feel that I have no place to seek refuge anymore. My native country is a bedrock of religious fanaticism and presents a certain death for me. Meanwhile my country of asylum is fast enveloping in Islamophobia.

These are the humanitarians that we should be welcoming and embracing, but instead the delusional xenophobic paranoia that is rampant within modern US Republicanism is promising something different.

In Pakistan it is religious fanaticism that has led to the emergence of rampant intolerance, discrimination and violence against minorities or even other variations of the same belief. We might indeed be tempted to look upon it all from afar and mutter “Tut tut, those poor delusional fools” … yet fail to recognise that we harbour the potential, the very distinct possibility, that if Trump gets elected, then something very similar might no longer be constrained to a far and distant land. Right wing Christian belief would very much like to assert itself, promote its specific ideas as law, and openly discriminate against others who do not believe the exact same things. Once again, not all are like that, and so it is not about individuals who believe, but rather is about bad ideas being permitted to dictate.