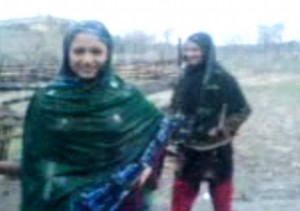 Noor Basra and Noor Sheza, aged 15 and 16, made a mobile phone clip of themselves dancing in the rain outside their house in the town of Chilas, in the northern region of Gilgit, Pakistan. When it then circulated, there was outrage, so much so, that it motivated five thugs to shoot both them and their mother for bringing dishonour.

The utter insanity of such thinking is truly hard to grasp, this town felt shame because two teens did what all teens do – expressed the joy of life … and yet apparently shooting and murdering them, nope not a problem – honour restored. And so now the town of Chilas in Pakistan is infamous right around the entire planet because sections of the local population have had their minds so fucked up by Islamic Misogynist bullshit that they seriously think that slaughtering teens is “honourable”.

When I say, “infamous all around the planet”, it is no exaggeration …

So there you go Chilas in Pakistan, congratulations you are world famous, all around the planet people have now heard of you and are quite rightly labelling you as a bunch of fucking lunatics.

Wrong – when you embrace a belief that endorses Misogyny as a virtue, and advocates that woman are property and not people, it not only nurtures such thinking, but effectively endorses it.

Do not misunderstand me, most Muslims do not behave like this and would never behave like this, the belief system is vast and diverse. My specific objection here is to the rather bad idea that the belief promotes – that woman are an inferior species and need to be kept in check and ruled over by men.

There are claims that Islamic thinking promotes the status of women and yet the rather stark reality is that it does no such thing … many variations dictates how women should dress, often denies them the right to work or drive, or for that matter determines that they cannot do anything without the permission of a male guardian. Legally most scholars say that in law a women’s testimony is unacceptable regardless of whether they testify alongside male witnesses. The quran itself promotes the idea that the testimony of one man is the same as that of two women. Do all strands of Islamic thinking advance such thoughts? No, but many do and that is a huge problem that infringes upon some rather basic human rights.

The key problem is that when such thinking takes root within the right cultural context, then the concept of murder as a viable means to keep the woman in check becomes socially acceptable – it is that basic form of Misogynist thinking that must be robustly challenged. If that does not happen then the slaughter of the innocent will continue.