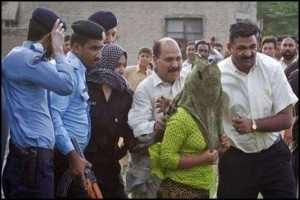 Today a bit of good news … Rimsha Masih is now safe. She is the 11 year old Pakistani girl who was arrested last August in Islamabad after a Muslim cleric accused her of burning the Qur’an, and was held in jail before getting bail.

Did she actually burn a Quran, perhaps accidently? Nope, not at all, the cleric who accused her was later found to have fabricated the  evidence and so the case against the girl was dropped. You would think that would be enough, but no, others in similar circumstances that had proven to be innocent still ended up being murdered by religious thugs, so there were real concerns for her safety.

For further background context I blogged about the case last September – here.

The latest news is that Canada has taken her in, as reported in the Guardian …

Kenney [The Canadian Immigration Minister] said he had been following the case and was prompted to act when a Pakistani contact asked him in January whether the family could come to Canada.

“I said absolutely, if they could get her out,” Kenney told the Canadian Press on Sunday. “So a number of people did some very dangerous, delicate work to extricate her and her family from Pakistan, and we provided the necessary visas.”

On Saturday the girl’s lawyer said she was in Canada, but Canada’s immigration service at first said privacy concerns prevented them saying whether she was in the country.

Kenney said he had instructed immigration officials to process the family’s applications for permanent residency on humanitarian and compassionate grounds.

When it comes to supposed crimes such as Blasphemy I truly do struggle to understand who the victim actually is, if Allah is indeed offended, then perhaps he should come down and deal with it all himself. It would never happen of course, while Allah is supposed to have 99 names that describe his various attributes, there is one specific rather important attribute that is missing from that list – existence.