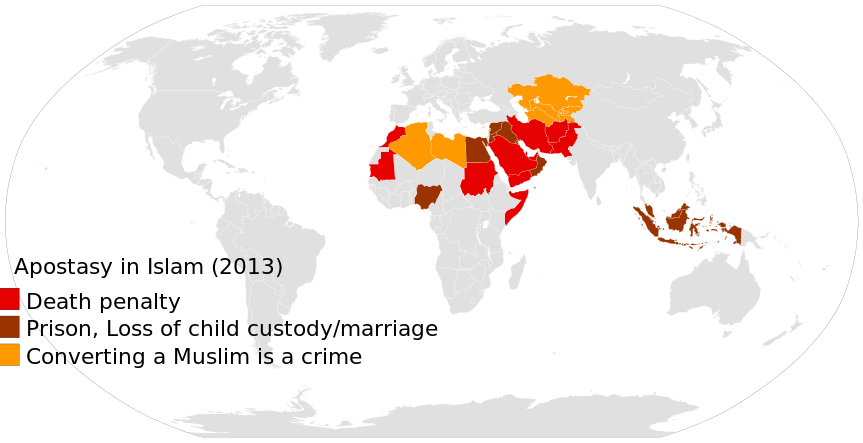 It is a sad fact there even in the 21st century, a 7th century mindset still prevails in some places.

Is that a factual statement?

Indeed it is, the above diagram illustrates the nations that have explicit laws that oppress those that dare to simply stop believing religious nonsense, and if you still doubt this, then the facts are freely available for anybody to check.

Last Friday, Raif Badawi was taken out of his prison cell, brought to the square in front of al-Jafali mosque in Jeddah, Saudi Arabia, lashed 50 times, then taken back to his prison cell. This will be repeated next Friday, and the Friday after that, and then again and again each week for the next 20 weeks. There is a distinct possibility that he will not survive this barbaric torture, but if he does, then he has been sentenced to spend the next 10 years in jail.

What exactly was his crime?

He is a Saudi Arabian writer and activist and the creator of the website Free Saudi Liberals. Because he has quite rightly criticised senior religious figures on his website and also identified Imam Muhammad ibn Saud Islamic University as “a den for terrorists.” they decided to silence him. There was a trial of course, but the concept of a fair trial in Saudi Arabia is a mockery of the very concept of justice and so the inevitable sentence was handed down. As for his lawyer, Waleed Abulkhair, well they jailed him as well.

Human Rights Watch, International Humanist and Ethical Union, and Amnesty International have all vigorously and robustly criticised barbaric Saudi Arabia, for this, and the many other similar instances of gross human rights abuses.

You might expect that perhaps the United Nations Human Rights Council could take some decisive action here, but the problem is that Saudi Arabia is rather absurdly a member of that council. I truly struggle to grasp an understanding of why a nation that breaches almost every single human right and is one of the worst offenders is permitted to be a member, that in itself is utterly absurd.

Are things better when the Islamic clerics are not in charge? Sadly no.

Last Saturday Karim al-Banna, a 21 year old student in Egypt (which is currently a military dictatorship), was sentenced to 3 years in jail.

His crime is that he simply declared that he did not believe in Islam on Facebook, and that’s it, that is the entire scope of his crime.

His nightmare started when his name appeared in a local daily under a list of atheists, and as a result he faced harassment. When he approached the police last November to complain about the harassment, they arrested him and accused him of the “crime” of insulting Islam.

Like Raif Badawi in Saudi Arabia, what is happening to Karim al-Banna in Egypt is not an isolated case, France.24 reports that the authorities in Egypt have even set up workshops to counter atheism.

The Attributes of Islam

We can all quite happily condemn the violent atrocities, but we should not forget that one of the very basic attributes of Islam is Intolerance.

I’m not suggesting that all Muslims are intolerant, because clearly most are decent honourable human beings who have no desire to exercise intolerance, but rather that one of the core principles enshrined within many if not most, strands of Islamic belief is pervasive and gross intolerance, and so when Islam gains dominance, this intolerance openly manifests itself. Some of course may quibble with me about this and cite 2:256 from the Qur’an, and if they should do so, I would in turn proceed to quote the verses that are commonly recognised and openly declared to abrogate that, but in the end none of that matters.

What a specific individual declares specific Qur’anic verses to mean is utterly irrelevant, the stark reality we face is the pervasive and endemic intolerance that manifests itself within every single Islamic nation on the planet – there are no exceptions. The victims of this intolerance is anybody and everybody who holds any kind of minority view or belief within any islamic nation, and I do not mean just non-belief, or other non-Islamic beliefs, but also other variations of Islamic belief.

Try being a Shia or an Ahmadiyya in either Pakistan or Saudi Arabia and you would then quickly discover how “peaceful” and “loving” Islam actually is if you openly and vocally hold a slightly different variation of belief than the prevailing majority variation.

1 thought on “The pervasive and endemic intolerance of Islam”