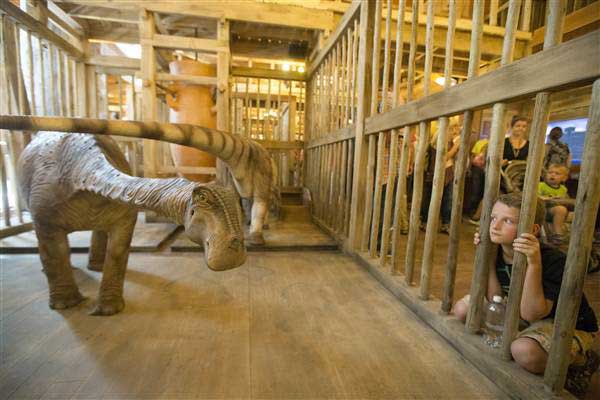 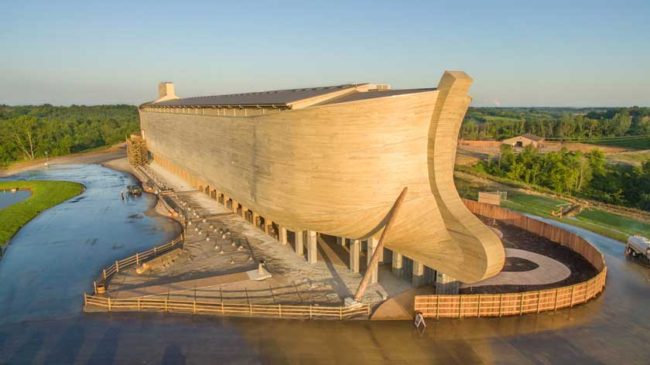 Did you know that #ArkEncounter is a life sized replica of Noah’s Ark?

This edifice is quite literally a monument that has been erected to both celebrate and promote complete and utter stupidity. The name of the organisation behind the project, Answers in Genesis, is perhaps one that gives you a not so subtle clue regarding their stance. Apparently, according to them, not just planet earth, but the entire universe, all 2 trillion galaxies, each with at least 100 billion stars, popped into existence six thousand years ago. It is most probably an event that came as a complete surprise to all the civilisations there were flourishing at that time. And the evidence for this age is …. oh come now, you can guess … yes indeed, the bible says so and that for them is sufficient.

Incidentally, apparently the founder Ken Ham does keep his finger on the pulse of what people are saying about it all, so with that thought in mind … “Hi Ken” (Waves).

The desire to promote this belief manifests in two big ways. First we have the Creation Museum which opened its doors in 2007 via private funding to the tune of $27 million. Visit and it will feel like going on a trip to Universal Studios in Florida … quite literally … because the guy who created the displays, Patrick Marsh, also did some of the attractions at Universal Studio in Florida. This is perhaps in many ways wholly appropriate because both are complete fantasies. The only difference is that AiG wants to con the gullible into believing it is all true.

The UK based food and travel writer A.A.Gill paid a visit back in 2010 and described it all as follows within a Vanity Fair article …

This whole building is devoted to the literal veracity of the first 11 chapters of Genesis: God created the world in six days, and the whole thing is no more than 6,000 years old. Everything came at once, so Tyrannosaurus rex and Noah shared a cabin. That’s an awful lot of explaining to do. This place doesn’t just take on evolution—it squares off with geology, anthropology, paleontology, history, chemistry, astronomy, zoology, biology, and good taste. It directly and boldly contradicts most -onomies and all -ologies, including most theology.

His entire article about his visit there is quite frankly hilarious and well worth a read.

Not content to build a Museum that is not actually a Museum at all, the AiG folks decided to spend in excess of $100 million building a life-sized replica of Noah’s Ark. In this case it is a boat that is not actually a boat.. In July of 2016 they finally opened the doors for guests to enter two by two. Oh and least you wonder, you can’t bring pets, they have banned them.

Bill Nye the science guy paid a visit and was thrilled with everything he saw. As he bubbled enthusiastically about all the exhibits he openly declared that everybody needs to go visit …. oh wait, that’s not quite how his visit panned out. This is what actually happened …

The bow-tied man of science — openly skeptical about the exhibit from the time it was announced — was an invited guest at the Ark Encounter, which opened July 7 and is billed as the largest timber-frame structure in the world, at 51 feet tall and 1-1/2 football fields in length.

Nye had to see the voluminous vessel for himself, and set off for the rolling green vistas of Williamstown, a rural community south of Cincinnati.

What he found, he told NBC News, was an eye-catching attraction that was “much more troubling or disturbing than I thought it would be.”

“On the third deck (of the ark), every single science exhibit is absolutely wrong,” he said. “Not just misleading, but wrong.”

… Nye takes particular exception to the dinosaurs on the ark …

… Nye said the exhibit encourages visitors to trust faith over science and thereby undercuts their ability to engage in critical thinking.

“It’s all very troubling. You have hundreds of school kids there who have already been indoctrinated and who have been brainwashed,” he said, recalling how one young girl on the Ark told him to change his way of thinking.

Wait … what! … roll that back a second. They have Dinosaurs on this ark?

Yes indeed they do, apparently the Flintstones is deemed to be a documentary.

So the Washington Post has just published an article on their latest plans for expansion. There we learn …

… a Tower of Babel, concept snack shacks, a 3,200-seat amphitheater and a 10-plagues-of-Egypt thrill ride

… and we also learn a bit more about the financing here …

… the project’s single largest source of funding was actually $62 million in junk bonds floated by the town of Willamstown, population less than 4,000, home to the Ark Encounter and the county seat of Grant County,

and that bit of utter stupidity by the town perhaps explains what they now have to cope with. The town …

Perhaps they believed that the ark park would deliver hordes of tourists. If so, then they got well and truly conned and they now know that …

a year after the ark opened, downtown Williamstown, about two miles from the tourist attraction, still isn’t much more than a collection of resale and “antiques” shops and shuttered storefronts. At lunchtime on a spring weekday, Main Street was devoid of pedestrians, tour buses or open restaurants.

… “In terms of revenue for the county, we don’t get too much from them,” says the county’s chief executive, Stephen Wood. The Ark Encounter negotiated a vastly discounted 30-year rate on property taxes in 2013 under a previous administration. “I hate it, but that’s the deal,” says Wood.

Perhaps the town thought that the ark park would create lots of new job openings within the community. It did, but it all comes with strings attached …

As a condition of employment, the museum and ark staff of 900, including 350 seasonal workers, must sign a statement of faith rejecting evolution and declaring that they regularly attend church and view homosexuality as a sin. So any non-Christians, believers in evolution, or members of the LGBT community — and their supporters — need not apply.

Ken Ham, the chap who founded Answers In Genesis, might indeed look upon every thing that he had made, and declare “it is very good”, but the folks in nearby Williamstown who got shafted out of $62 million to help fund this religious folly and got nothing to show for it all … not so much.