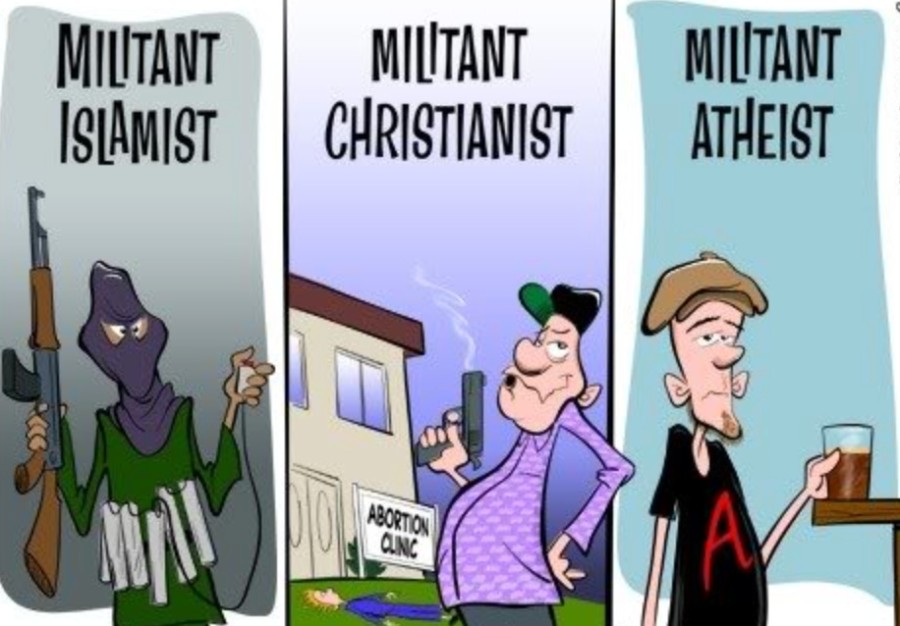 The latest trend from some rather extreme Islamic religious lunatics is to officially brand non-belief as violent terrorism.

First there is the Lebanese President who equated atheists to terrorists …

The million dollar quote is: “Peace will defeat war. Faith will defeat fundamentalism and atheism.” [0:30-0:34]

Wow… Just wow… The so-called President of the most “open and free” country in the Arab World just equated filthy religious extremist terrorists who kill our soldiers, to me, and people like me: those who don’t believe in his or any god, or any other regressive, counterproductive fantasy that makes people violent, oppressed and uninformed.

Yes indeed, Article 9 of the Lebanese Constitution says “There shall be absolute freedom of conscience”, but this is happily trampled all over by some lunatic who thinks his beliefs trump the Constitution. So here we have a country rapidly spiraling into the abyss thanks to people being too religious, fighting each other over who has the best god, and his solution is to be even more religious and lump the non-violent non-religious in the same bag as violent terrorists.

Did he really say this? Yep, here is the clip of him doing so … (and yes I checked, this was not posted on 1st April, he is deadly serious) …

So is this simply a slip of the tongue, a unique event? Perhaps he did not intend to say exactly this and he truly did make an honest mistake.

Meanwhile over in Saudi Arabia is a far worse example. There the law has been changed such that Saudi Arabia’s new terrorism law now officially labels atheists as terrorists. Human Rights Watch reports the details here …

(Beirut) – Saudi Arabia’s new terrorism law and a series of related royal decrees create a legal framework that appears to criminalize virtually all dissident thought or expression as terrorism. The sweeping provisions in the measures, all issued since January 2014, threaten to close down altogether Saudi Arabia’s already extremely restricted space for free expression.

…The interior ministry regulations include other sweeping provisions that authorities can use to criminalize virtually any expression or association critical of the government and its understanding of Islam. These “terrorism” provisions include the following:

Article 1: “Calling for atheist thought in any form, or calling into question the fundamentals of the Islamic religion on which this country is based.”

When you are in the game of criminalising doubt and disbelief, then that is a sure sign that not only does your belief have no evidence, but also that you are feeling highly insecure.

That second point is perhaps the key here.

… so the thinking behind this is deeply paranoid, and perhaps rightly so because right now there are rather a lot of fighters active in Syria who will be returning to Saudi Arabia, and the regime are terrified that those fanatics may strive for a similar end-game and try to initiate a violent revolution in Saudi Arabia as well.

The Saudi’s have openly funded and promoted extremist and very violent Islamic groups, and now this may all come back to potentially burn them.

What can I say except to observe that those that live by the sword generally do end up dying by the sword.