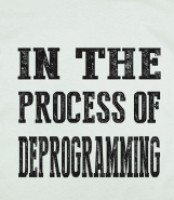 I had a conversation today with a chap who is totally sure that the illuminate are real and that they control everything.

He starts off by suggesting “Russia is an illuminati’s puppet just like America and other countries.“. Now, you do know that the word “illuminati” is a big bold red flag that announces “here be conspiracy bullshit”, so when faced with stuff like this how can you possibly have a dialog that might potentially made a difference?

In many ways, every conversation with somebody holding weird beliefs is a potential intervention, but where do you even begin?

I personally find that often the best approach in any intervention is not to be confrontational, but to instead nurture and stir up questions in a friendly way, and so this is how things played out …

Me: What convinces you that the illuminati are real and actually exist?

Believer: The facts on the ground

Believer: Look around you… You are a slave Neo..

Me: You don’t appear to have any actual evidence for your claim that you can point to, does that not strike you as rather odd?

Believer:  lol i have 100s of evidence but it they are right in front of your eyes but you are unable to see them.

Me: Why not pick the very best strongest example and explain it to me

Believer: Do you ever get the feeling that you are a slave?

Believer: lol then i can’t help you,why is that only 1 percent of the people in western countries and Russia controls 90% of the entire wealth of this world?

(tempting as it might be to debate this point, I instead decide to go back to his previous thought)

Me: You can’t help me because I do not experience the exact same “emotions” that you experience. Do you think that emotions are a convincing argument?

Believer: Heart is the center of emotions and feelings

Me: Is this evidence for your illuminati claim?

My goal here is not to win a debate, but rather to start him thinking and asking himself questions that he might not have asked or even considered. His answers are of course surface answers, because once a stance is taken it can be difficult for people to back down. I am secure enough in what I know to not have a desire to ensure that he publicly recants or that I can score points, but rather am concerned that he is blindly accepting an idea without giving it too much thought and so needs to be gently encouraged to start thinking about it all a bit more. Now, imagine how things might have panned out in a rather different manner if I had taken a different tack … like this perhaps …

Do you realise that the illuminati belief is complete bullshit, and that you are a stupid idiot for buying into this nonsense?

And of course he would immediately respond, “Well gosh you are right” … er no, perhaps not, and that is my point.

So here is what I am ready saying – being right and simply winning a debate should never be what it is all about. Would you like to simply score points, or would you instead prefer to make a real difference in somebody’s life by gently introducing them to questions that they might not have previously considered?

I do not claim to be a master at this, but instead have made rather a lot of mistakes along the way and in the process pissed off a lot of people, so hopefully as I learn better gentler ways of winning hearts and minds, I can share what I learn here so that you can benefit.

“The purpose of life is not to be happy. It is to be useful, to be honorable, to be compassionate, to have it make some difference that you have lived and lived well.” ― Ralph Waldo Emerson