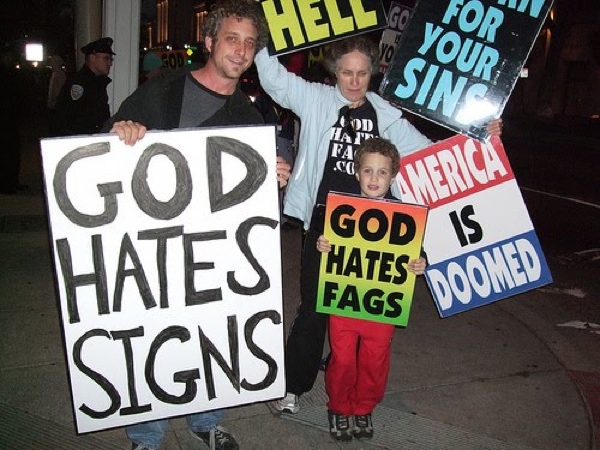 Oh the irony … in fact, I think this just broke my industrial strength irony meter.

OK, so what is the story here? Well, it is quite an amusing one. In Moore Oklahoma, there is a Liquor store called … Moore Liquor (well of course, who could resist that pun). So anyway, the store owner has a bit of a sense of humor, and so often puts up signs that have a bit of a twist in order to catch attention, and this latest one really worked (hey, free advertising happening here for him in this blog post).

When the homophobic hate monger, Fred Phelps, passed away, he posted this up …

The result – Westboro Baptist are a bit pissed off, so they will be protesting. When challenged by the media, the store’s owner Bryan Kerr said he was trying to be humorous without crossing too much over the line, and you know what, I think he got it about right. It is a funny ad that pokes a bit of gentle fun at the insanity that Fred Phelps represented.

Here is his actual quote (you can see the interview below) …

“Fred Phelps is the kind of guy who is very difficult for reasonable people to like, and I knew I wanted to do something that had just a little bit of humor but wasn’t too disrespectful,”

“As you would expect, the response has been incredibly positive,”

Local News station NewsOK did a segment on it all, and here it is