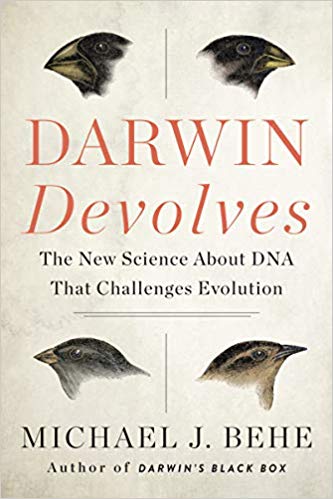 Biochemist Michael Behe of Lehigh University has a new book that will shortly emerge titled “Darwin Devolves”. While it will be a huge hit amongst Creationists, the wider scientific community will simply eye-roll and move on beyond this train wreck.

It is not out until the end of the month, yet there has already been a bit of a splash, but I’ll hold fire on that and first give you a bit of the backstory here.

Who Is Michael Behe?

He is a Professor of Biological Sciences at Lehigh University in Pennsylvania, and also a very well-known creationist. His big hit was the concept of irreducible complexity (IC). This is basically the claim that some biochemical structures are too complex to be explained by known evolutionary mechanisms and are therefore probably the result of intelligent design.

This is basically “Well gosh, then is all so complicated, I have no idea how this could have possibly happened naturally, therefore God did it by magic” dressed up to sound sciency. It’s not new, William Paley made the idea popular back in 1802. It is a very old idea that gets dressed up in modern clothes at regular intervals and emerges upon the world stage as if it was some new revelation. And so here we go again.

For the record, like all previous incarnations, the idea fails critical scrutiny. The irreducible complexity idea, popularised via Behe’s 1996 book “Darwins Black Box” has been robustly debunked by evolutionary biologists who very clearly show how the systems discussed by Behe can and do evolve. The idea is stone cold dead, and yet will of course make a zombie like appearance within creationist bubbles.

What is perhaps the true highlight of Mr Behe’s career was the Kitzmiller v. Dover Area School District trial back in 2005. That was the moment when Intelligent Design had the opportunity to finally present sufficient evidence that their stance was scientific, and so Behe was a star witness. After careful consideration of all the evidence the final verdict was the ruling that intelligent design was not science and was religious in nature. They basically failed to make their case and so the stance that “intelligent design” is religion and not science, is not simply an opinion, it is a legal fact.

One further observation concerns Lehigh university. They have the following statement on their website …

The department faculty, then, are unequivocal in their support of evolutionary theory, which has its roots in the seminal work of Charles Darwin and has been supported by findings accumulated over 140 years. The sole dissenter from this position, Prof. Michael Behe, is a well-known proponent of “intelligent design.” While we respect Prof. Behe’s right to express his views, they are his alone and are in no way endorsed by the department. It is our collective position that intelligent design has no basis in science, has not been tested experimentally, and should not be regarded as scientific.

In other words, his own university regards Mr Behe as a crank and does not support his position.

In anticipation of the book reviving the non-scientific creationist view, Science has published a book review rebuttal by three well-known biologists …

…In the grand scheme of evolution, mutations serve only to break structures and degrade functions, Behe argues. He allows that mutation and natural selection can explain species- and genus-level diversification, but only through the degradation of genes. Something else, he insists, is required for meaningful innovation. Here, Behe invokes a “purposeful design” by an “intelligent agent.”…

…Behe is selective in his examples….

…Behe doubles down on his claim that the evolution of chloroquine resistance in malaria by random mutations is exceedingly unlikely because at least two mutations are required, neither of which is beneficial without the other. His calculations have already been refuted (5), and it has long been known that neutral and even deleterious mutations can provide stepping stones to future adaptations. Indeed, a 2014 study, unmentioned by Behe, reported discovery of two genetic paths through which malaria has evolved chloroquine resistance through multiple steps (6)…

…Missing from Behe’s discussion is any mention of exaptation, the process by which nature retools structures for new function and possibly the most common mechanism that leads to the false impression of irreducible complexity….

…Behe asserts that new functions only arise through “purposeful design” of new genetic information, a claim that cannot be tested. By contrast, modern evolutionary theory provides a coherent set of processes—mutation, recombination, drift, and selection—that can be observed in the laboratory and modeled mathematically and are consistent with the fossil record and comparative genomics.

Ultimately, Darwin Devolves fails to challenge modern evolutionary science because, once again, Behe does not fully engage with it. He misrepresents theory and avoids evidence that challenges him.

Behe wrote a rebuttal to that criticism, but it does not actually address any of the above criticism at all. Instead he claims that his main argument was not addressed, and yet very clearly it was.

Behe appears to have missed the fact that the reviewers did address Behe’s main point—at least twice.  What is that point? It’s apparently the contention that evolution nearly always relies on inactivated genes during nonadaptive evolution, as such genes can be useful (not making a product can increase your fitness if that product is superfluous or injurious in a new environment). On top of that, mutations that “break” or degrade genes are more common than genes that affect or alter gene function. Put these together and you get Behe’s Rule, but the rule itself is broken.

The problem with Behe’s Rule is that yes, random mutation most often degrades genes, and broken genes can be adaptive, but natural selection doesn’t just choose any gene; it chooses ones that increase fitness. And we have many examples of non-broken genes that increase fitness. These include the arising of duplicated genes and then the divergence of those genes to perform new functions on top of old ones—a very common mode of adaptation in nature that has created many useful “gene families.”

He then goes on to point out exactly where in that original review this point is made.

Professor Rich Lenski, who is best known for his still ongoing 30-year-old long-term E. coli evolution experiment, and who was one of the authors of that that original Science book review has also written about it all in a great deal more detail …

Within that last link at the end, Prof Lenski writes this very good meta-summary …

I’m concerned, though, when these scientific and religious perspectives get intertwined and confused, even when they concern those big, important questions that interest all of us. I get even more concerned when I see what I regard as non-scientific ideas (such as “intelligent agents” introducing “purposeful design” by unstated and untestable means) being used to undermine the admittedly imperfect (and always subject to revision) understanding of evolution that science provides to those who want to learn. And I am most disturbed when these confusions appear to be part of a deliberate “wedge” strategy with ulterior sociopolitical motives. People will undoubtedly have diverse views about whether scientific explanations are adequate and/or satisfying ways to understand the world, but I see danger in trying to undermine scientific methodology and reasoning to advance religious beliefs and political goals.

For the deeply religious who already believe, none of the above will actually matter because facts never do. The human religious experience is basically an emotional one, and so the publication of a book that appears to verify a preexisting belief is good enough, they don’t need to actually read it or understand it.

The bottom line is this – Behe’s latest book is more of the same stuff we have come to expect from him. It is not scientific, but instead cherry picks and misrepresents.

One further observation. If you consider the idea of arguing with me about this, hit pause. Your argument is not with me, it is with the entire scientific community. First you need to persuade them. Good luck with that.

Meanwhile, if you are curious to learn more about evolution then via this link by Rick Lenski you will find a list of resources that can act as a stepping stone.