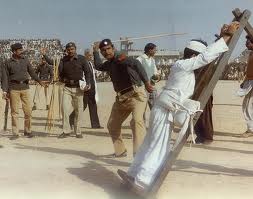 A 15-year-old girl sentenced to 100 lashes for “fornication” on a remote part of the Maldives is at the centre of a new row between moderates and religious conservatives in the Indian Ocean luxury tourist destination.

A court in the tiny island of Feydhoo last week sentenced the girl to a public flogging after she admitted to having sex out of wedlock, court officials have said.

Now just to ensure that you fully understand the context here, this is not the story of a rogue teen, she had been abused and repeatedly raped. While investigating this, the fact that she had also had consensual relations came to light to the authorities.

While you can of course immediately work out that lashing her 100 times is not justice, but rather is a purely barbaric act, but sadly they can’t.

Do all the local Muslim population support this? No, most people, with or without belief are generally decent …

Recent years have seen tensions between Muslims practising a traditional, relatively tolerant type of Islam and supporters of a more rigorous, puritanical style heavily influenced by that practised in countries such as Saudi Arabia or Kuwait.

There have also been increasingly acrimonious clashes between both elements and liberal reformers, such as the former president and internationally respected environmental campaigner Mohamed Nasheed.

According to a translation by local website Minivan News, the statement said “the purpose of penalties like these in Islamic sharia is to maintain order in society and to save it from sinful acts“. One tiny flaw there in that argument, it does not work, and has been demonstrated time and time again to not work. Since they practise such a deterrent, do we observe such order? No we don’t, they have been increasingly hit by serious social problems such as gang violence and drug abuse as well as growing political instability.

So will some common sense previal in this case? Perhaps …

Though they appear to have initially backed the decision to prosecute the girl, Maldivian authorities are now working with the country’s ministry of Islamic affairs and judiciary to cancel or suspend the punishment, a government official said.

Masood Imad, a spokesman for the current president, Mohammed Waheed Hassan, told the Guardian that the government considered her a victim “who should not now become a victim of the law as well”.

“The law is there to protect her. It will take its course but we are fully engaged and we have some levers and we are hopeful that she will not be lashed. Let’s see who wins the day,” Imad said.

Conservatives, however, are calling for the sentence to be carried out.

It is truly praiseworthy to note that some are indeed fighting against the religious insanity being promoted by those who embrace a literal interpretation of a barbaric  7th century text, and while the fact that cases such as this keep coming up on a regular basis might indeed cause one to despair about the complete lack of decency and humanity within such a popular belief system, the fact that there is also a considerable ground swell of opposition as well is indeed a very positive sign.

As for the very act of flogging, that in itself should simply not be a part of any legal system. The UN Agrees …

The UN high commissioner for human rights, Navi Pillay, in 2011 urged Maldives to end the “degrading” practice of flogging.

“This practice constitutes one of the most inhumane and degrading forms of violence against women, and should have no place in the legal framework of a democratic country,” Pillay said at the Maldives parliament. Her comments provoked a fierce reaction from conservatives.

The case is one of many that have highlighted tensions over women’s rights and sexual violence in south Asia in recent weeks.