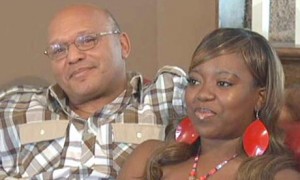 This one truly falls into the WTF category.

The rather nice looking couple (Charles and Te’Andrea Wilson pictured here) wished to get married, so they put all the arrangement in place to do so at the First Baptist Church of Crystal Springs in Mississippi. Well unfortunately things did not pan out. As reported in the Guardian …

The sanctuary of the church had been arranged, the rehearsal was set for Friday, invitations had been sent out to friends extending a “special thank you to the First Baptist Church and members”.

Then, at about 5.10pm on Thursday evening Te’Andrea received a call. Some of the congregation of the church, which is largely white, had seen a group of black women setting up the sanctuary for the wedding and complained to the pastor.

“If the pastor married her, because they were black then they would vote him out,” Te’Andrea was told. The wedding was off.

So in essence, this pastor was blackmailed … either boot them out because they were not white, or lose his job. He opted to carry on being employed by bigots.

As you might imagine, Mr Wilson confronted this pastor …

“When I got the news I couldn’t believe it at first,” Charles Wilson told the Jackson Clarion-Leader. “This is not a matter of colour for me, it’s about God, and what better place to get married than God’s sanctuary. God’s love is colour blind.”

Wilson confronted the pastor, Stan Weatherford, and asked him what had happened. According to Wilson, he replied that he had “received all sorts of phone calls, text messages, and it was just not going to happen”.

Apparently when questioned by a news channel, this Pastor is quoted as saying, “I didn’t want to have a controversy within the church, and I didn’t want a controversy to affect the wedding of Charles and Te’Andrea. I wanted to make sure their wedding day was a special day.”

Well, he might not have wanted a controversy, but his decision has generated one. Apparently only five or six members complained.

The local press reports this here where you will also find a video interview with the couple.